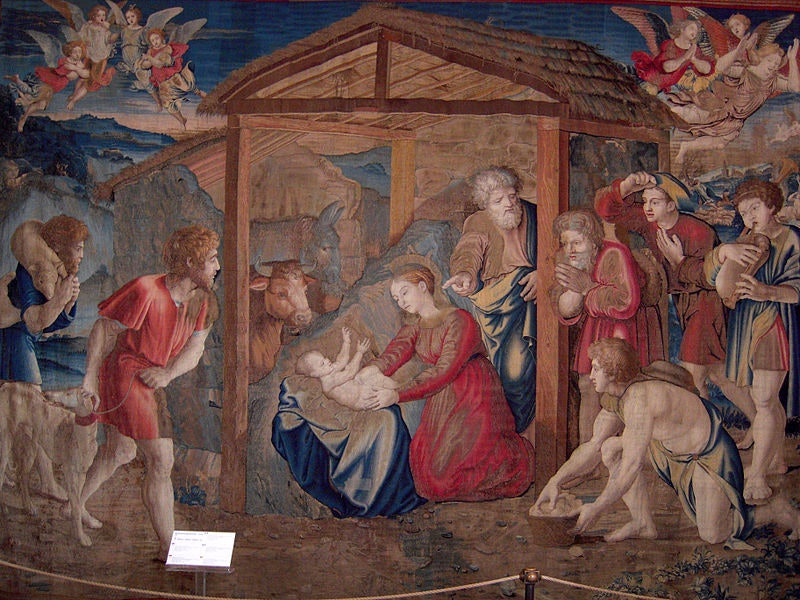 Why do Christians celebrate the birth of Jesus on December 25? It's not as simple as "that's when he was born", at least not for people who aren't devout Christians. Theories about why we celebrate Christmas on December 25 has occupied historians for over a thousand years, with competing arguments showing up in theological texts from the twelfth century and beyond. There's no reference to any specific dates in Christian scripture, but the tradition must have evolved somehow; and depending on who you believe, it's either a co-opting of pagan festivals of the sun, a mathematical calculation trick, or some combination of the two.

There are a few indicators in the Bible that show that December 25 may not have been on the minds of the first Christians, either. One sticking point in particular? The fact that shepherds were out tending their flocks in the middle of the night when angels famously turned up to tell them a child had been born, and that it was acceptable or even vaguely possible for Mary to give birth in a shed without freezing to death. According to that weather-based logic, some scholars note that perhaps Jesus's birth was meant to be in spring.

It's unlikely that we're about to have a revolt and overturning of the tradition of Christmas on December 25, but keep that in mind next time a kid asks what on earth shepherds were doing hanging around with sheep in the snow on a winter night.

The Romans May Have Been Taking Over A Pagan Festival

One of the dominant theories in popular histories of Christmas is that the December 25 date is yet another example of Christianity commandeering "pagan" festivals to help people acclimatize to the rituals and practices of a new god. This is what's alleged to have happened with Easter, which was merged with Nordic celebrations of the goddess Eostre and various other myths of god-death and rebirth. The theory goes that Christians in ancient Rome merged the phenomenon of Christ's birth (Christmas) with an already existing holiday: Saturnalia, a bonkers festival dedicated to the winter solstice and the god Saturn that was one of the highlights of the Roman calendar. It was basically a free-for-all, with slaves allowed to be on equal terms with their masters, gifts given to everybody, a massive public banquet, and riotous parties in the streets. And guess when that was held? December 25.

It's an interesting theory, but it's got its critics. The earliest reference to December 25 as the birth of Christ comes from a Roman calendar from 354 AD, but ancient history expert Dr. David Gwynn told History Today that the replacement story doesn't entirely work, because Saturnalia seems to have been celebrated for a while after Christmas was declared to share the same day. Saturnalia does seem to have evolved into the medieval practice of "misrule" during the 12 days of Christmas, in which social roles were reversed and massive revels were held. It's a tricky one.

Other Theories Involve The Syrians And Sun-Worship

This is where it gets interesting: there was another ancient festival celebrating a god held around December 25, and Dr. Gwynn believes it to be a more valid option for the festival that inspired the birthdate of Christ. The festival in question? A sun-worshipping celebration of the "birth of the sun" inspired by the worship of the Syrian god Mithras, known as the dies natalis solis invicti. It's a theory that's held some weight since the 19th century, when Sir James George Frazer pointed out in The Golden Bough that celebrations of Mithras on the winter solstice, December 25, have a lot in common with Christian celebrations, including representing the newborn sun as a tiny child and talking about "virgins." December 25 was a celebration of the "return" of the sun after the darkening winter.

The kicker for this theory? Constantine, the first Roman emperor to convert to Christianity, was raised in the Sol Invictus cult, a sun-worshipping variant on traditional Roman religion that may have had its roots in the worship of Mithras and held its main celebration on December 25. Told you things got complicated.

It Could Have To Do With The Date Of Jesus's Conception

If you want an explanation that's not to do with pagan festivals, how about one drawn from fiddling with numbers? A popular theory among scholars, as explained by a book on Christmas customs in 1912, was that the birth of Christ was basically a mathematical creation: early believers decided the date of Christ's conception, counted forward nine months, and got December 25. The Routledge Encyclopedia of Ancient Mediterranean Religion calls this the "computation" theory, which took a number of steps: Jesus was believed to have died on March 25, illustrious figures were meant in ancient Judaic tradition to be conceived and die on the same day of the year, and therefore the birth must have taken place nine months later.

The interesting thing about this is that it seems to be the thinking behind the earliest celebrations of Christ's birth back in the 2nd century, which seem to have taken place on January 6. Yep. This appears to have been motivated by the belief that Jesus's crucifixion took place on April 6 and that his conception must have taken place on the same date.

Orthodox Christians Celebrate December 25 According To An Old Roman Calendar

You likely know that the Christian Orthodox tradition celebrates the birth of Christ at a later date (January 7, to be precise); but you may not know that it's not actually them being contrary. It's because they believe that to be December 25, because they're operating on a calendar that dates back to the Roman Empire and remains in place in a few rare churches around the world.

If you want a good primer, Bruce David Forbes' Christmas: A Candid History lays it out (reasonably) clearly. Essentially, Julius Caesar created a new calendar for the Romans labelled the Julian calendar which was excellent and highly functional in basically every way, except that it was "off" by several minutes a year, a dysfunction that added up to eleven days by 1528, when Pope Gregory attempted to fix the problem by instituting the Gregorian calendar instead. That's the calendar most of the world follows. (It took a while for everybody to adjust to the Gregorian way, though; for a few centuries, correspondents in different European countries had to put two dates on their letters because the two places followed separate calendars. And then there were the famous English calendar grumbles of 1752, when the British government suddenly switched to the Gregorian calendar and people were incensed at having to pay for eleven "lost days" of rent.)

Some Orthodox churches, however, never switched over at all. The Russian Orthodox calendar remains Julian, and their December 25 falls almost two weeks later than ours, on January 6. It's all very complicated. Blame Pope Gregory and Mithras.