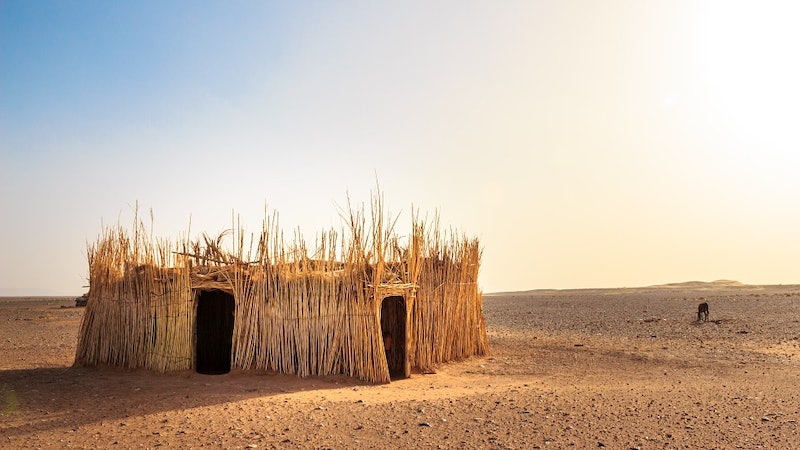 In November, the death of a young Nepali woman made international headlines — she had died while staying overnight in a menstrual hut designed to segregate women who are menstruating from their communities. The tragedy wasn't just that Dambara Upadhyay, who was 26, perished of an unknown medical cause while in a poorly heated hut in a remote area. It was that this practice is just one of the many ways in which the perfectly natural act of menstruation is demonized, creating disadvantage, damage, and real danger to women around the world.

Menstruation huts seem like an extreme, but they're the tip of an iceberg that affects women's education, empowerment, literacy, health, and working life in many different societies worldwide. (And no, it's not just a non-Western prejudice; think about how tampons are taxed across much of the United States, and how they were regarded as a "luxury item" in U.K. legislation until earlier this year, because not having blood running down your legs is clearly the mark of a luxurious life). There's basically nothing more sexist than segregating, degrading, and discriminating against a gender because of a physical process of adulthood over which they have precisely zero control, but that's the reality for millions of women worldwide, and it's something we need to fight. Loudly.

Bustle spoke with Cecile Shrestha, associate director of WaterAid America and one of the spearheading forces behind their "Menstrual Hygiene Matters" campaign, to get the lowdown on menstrual huts and discrimination worldwide, how it impacts women and girls, and what can be done to help.

The needless death of Dambara Upadhyay has prompted a potential government crackdown on menstrual hut practices across Nepal; but, as Shrestha tells Bustle, the idea is already against the law. "The huts themselves have been outlawed, but the deep rooted tradition continues to be practiced in the most remote parts of the country, including in areas where WaterAid works," she said. And location helps keep them secret, both from Nepalis and from the outside world: Marginalized rural communities, she notes, are often highly separated from urban areas.

Dismissing the practice of menstrual huts as an archaic holdout or innocent cultural practice is a drastic underestimation of how serious the problem is. "While menstrual huts are the most extreme form of seclusion," Shrestha says, "the practice of seclusion exists across the country in differing forms, including in the capital city of Kathmandu." Menstrual separation isn't just restricted to Nepali society, either: Women physically removing themselves during their period for fearing of "contamination" is found in places as diverse as Bali and Nigeria. And that's not considering the other kinds of menstrual taboos that restrict women's lives, from bars on their religious activity to keeping them out of school. It's not an easy world out there for women on their period.

Discomfort with the concept of periods is even found in language, with over 5,000 euphemisms for it recorded worldwide; but it has widespread and devastating influences on behavior, with restrictions on menstruating women accessing holy temples in various religions, touching men for fear of "contaminating them," forbidding them from washing period blood away for fear of infertility, or preparing food in case it "spoils." Menstruating women are seen in many cultures as dangerous, threatening, and unclean.

The stories Shrestha tells of individual interactions with teenagers and women on their periods in countries where menstrual taboos run strong are heartbreaking. "We wanted to hear from teenage girls directly about their everyday experiences around menstruation," she tells Bustle of a mission to Nepal with NPR in 2016. What they found was devastating.

"In the remote Far West region of Surkhet," she says, "we met a 14-year old girl named Kamala. She stood out because she seemed especially fearful to approach us. We quickly learned that it was because she was on her period, which dictates that she should keep her distance. She was in her fourth night of sleeping in a menstrual hut, and allowed us to follow her to see it."

And the sight wasn't edifying: "Her hut was nothing like a hut in the western sense of the word: it was a raised mud platform with no walls or roof, just wooden sticks on four sides that tried to create some semblance of a structure," Shrestha says. "We were shocked by the poor conditions of her hut and that she was sleeping there completely exposed to unwanted visitors, wildlife and the torrential downpours that inundated the village each night we were there."

It boggles the mind: girls having to sleep in dangerous and potentially lethal situations night after night because their bodies just happen to tell them they aren't having a baby that month. And even in places without huts, the situations are still serious. In Kathmandu, for example, Shrestha explains, "Women aren't banished to a hut when they're on their periods, but they are forbidden from entering the kitchen, preparing food, or touching their male relatives." Menstrual taboos are tied into cultures where male control is endemic. "Fathers, husbands, and sons maintain control over decision making, finances, and livelihood," Shrestha explains, meaning that "many women feel unable to speak up in their own households, among their families, and communities." The overall experience of women in menstrually taboo communities? "Voiceless."

The Educational And Economic Cost Of Menstrual Taboos

The variety of ways in which menstrual taboos and discrimination can negatively affect women are truly astonishing, from the psychological to the economic. "Menstrual taboos and superstitions are incredibly detrimental to female education and empowerment," Shrestha says. "From a young age, girls in Nepal are taught they are impure and are [a] curse on their families while menstruating. This is incredibly damaging to a young girl’s psyche and sense of self."

But one of the biggest impacts is the simple incompatibility, in Nepal and elsewhere, of being in education and having a period. "As girls encounter adolescence and begin their periods," Shrestha says, "they often opt out of school because schools are not supportive environments where they can manage their periods hygienically and with dignity. This can be as simple as not having a private bathroom where they can manage their periods privately, or access to water to use for washing."

A UNESCO report in 2016 noted that 10 percent of all girls in Sub-Sarahan Africa miss school during their menstrual cycle, and the numbers are worse in other countries: 30 percent of Afghani and Nepali girls miss menstrual days, while 20 percent of girls in India drop out entirely in their menstruating years.

The effects can be devastating, Shrestha says. "Many girls miss out on these key years of school, which impacts them in the long run — they often marry earlier, bear more children, and are less able to earn an income," she notes. It also disempowers them generally: WaterAid, Shrestha explains, has found time and time again that "education, awareness, and the socialization that occurs at school are directly linked to empowering younger women to ask questions and challenge their families and traditional practices." In other words, menstruation is stopping young women from changing their worlds.

The problem, as we saw with Dambara Upadhyay's death, is that sometimes legislation doesn't quite go far enough. Menstrual huts are already against the law in Nepal, but Shrestha "saw villages where menstrual huts had been knocked down, and yet the [seclusion] practice was still prevalent." When it comes to actually solving the issue of menstrual taboos and the genuine costs to female equality and life, both in Nepal and worldwide, unseating the beliefs themselves has to be the root of the problem.

So what can we do? Shrestha's approach at WaterAid is local, and based around targeting harmful menstruation beliefs. "We are working with local community leaders to carry out long-term interventions aimed at changing mindsets, through awareness, education, and advocacy initiatives," she says, noting that they're being sensitive to the cultural context and working with local partners to help institute programs that help women on the ground.

But if you're not in Nepal, India, or elsewhere, you can still help. "We need people to donate their time, talent and money to breaking taboos around menstruation," is Shrestha's message. "We need people need to start talking about periods and how menstruation uniquely affects women and girls. Many times that requires courage, but this is an important first step that is essential for spreading awareness and, ultimately, combatting the problem. We also need people to help fund this work by donating to organizations like WaterAid that have been working on these issues for decades, and have an excellent track record for designing interventions that help women and girls find their own voices and lasting solutions within their local communities."

So if you're feeling inspired (or angry), find WaterAid, WASH United, or other organizations devoted to stamping out menstrual taboos, and offer them your money, attention, and time. It's worth it.