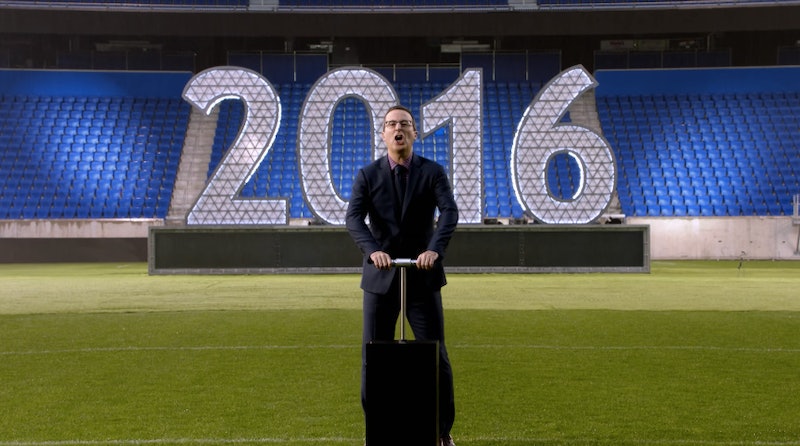 John Oliver had one last episode after Donald Trump won the election. And given that Oliver spent the entire previous year warning the general public about Trump and making the very convincing argument not to vote for him, that really had to suck. So his season finale message was totally fitting: "F*ck 2016." In fact, the no-good, rotten year was so bad that he just had to blow it up — quite (CGI-animated) literally. But don't forget were a few good things this year, particularly these 11 John Oliver videos from 2016.

His HBO show Last Week Tonight really took off this year given his coverage of the presidential race, particularly in his takedowns of Trump, the Trump University scandal, etc. But if you've just been watching the political clips online, you've missed a lot of other really good content. For being a comedy show, the topics he choose are key for everyone to understand — and he breaks down complicated issues in ways that anyone can understand. If you have time, you might want to go back and watch them all. They're all on HBO Go. But if you want the highlights, check out these 11 Oliver videos, which are freely available on the show's YouTube channel.

Maybe this is one people should have watched more closely when it aired the first time in February. It's a great look at the different types of laws states have passed to try and limit access to the vote. That's just not American where there's "the unshakeable principle that everyone should have an equal vote, even idiots."

He also covered abortion and the many state laws that have been passed in recent years to try and limit it — even though a vast majority of Americans believe it should be legal in at least some circumstances. That's right, "Mississippi now has four times as many S’s as it has abortion clinics," Oliver pointed out.

Remember when the FBI wanted to make Apple unlock the San Bernardino shooter's iPhone? Well it was a big deal — and about much more than the one case. They wanted Apple to essentially create a back door into their software that could be exploited not just by law enforcement but anybody who got a copy. Where would it end? Oliver summed it up, "It might be the iPhone today, and an Android phone tomorrow, and a Blackberry the day after that, assuming that the day after that is in 1998."

Lending his voice to the #OscarsSoWhite Twitter controversy, Oliver pointed out that there is a serious issue affecting Hollywood: whitewashing. That is white actors playing non-white characters: "That’s right — Jake Gyllenhaal, a white American with a Swedish last name, was cast to play the Prince of Persia from, you know, Persia. And he’s far from alone. Just last year, Emma Stone played the half-Asian Allison Ng in Aloha. Apparently, ‘aloha’ means ‘hello,’ ‘goodbye’ and ‘you’ve got to be f*cking kidding me.'"

This heavy metal has been in the news a lot this year due to the Flint water crisis, but that's just the tip of the iceberg. Oliver looked at reports that show lead is in water systems in all 50 states — perhaps not at the levels we see in Flint but still dangerous, especially children.

Oliver — despite the dorky glasses — is no scientist. He is, however, hip to the fact that not all scientific studies are created equal. Many more still are not reported on correctly. "Science is, by its nature, imperfect, but it is hugely important. And it deserves better than to be twisted out of proportion and turned into morning-show gossip," he says. Don't miss this one to become a better consumer of science news.

When you invest in a retirement fund, there's this idea that they're working to make you the most money possible. Well, think again — they actually don't have to do that unless they are fiduciary. "It’s like finding out that only some restaurant waiters are forbidden from ejaculating in your soup," Oliver said — and that's only one of the problems.

News is often consumed for free these days — the days of paying for newspapers might be dead. But sadly, they're the only places actually reporting the news. Even TV news (and Oliver's own show) require on the initial reporting of newspapers. "It's pretty obvious without newspapers around to cite, TV news would just be Wolf Blitzer endlessly batting a ball of yarn around," Oliver said. If that doesn't scare you into a Times subscription, what will?

Cars are expensive, but they cost even more when you're too poor to get a low-interest loan. And so may people end up paying way too much for really crappy cars that then are financed with extremely high interest. It's the ultimate vicious circle, and these consumers ultimately pay way more than the car is worth.

Oliver's segment on charter schools was actually more controversial than most. After John Kasich compared them to pizza places, Oliver went on the attack. "The problem with letting the free market decide when it comes to kids is that kids change faster than the market. And by the time it’s obvious the school is failing, futures may have been ruined," Oliver said, prompting many charter schools to respond.

Taking on one of the most if not the most important issues of our time, Oliver broke down police violence and accountability with very few jokes. He took on the argument that there are just a few bad apples in the nation's police department, so reform is not necessary. "Snow White wasn’t afraid of apples until she took a bite out of one really bad one. But I’m telling you, the next time an old lady comes at her with a piece of fruit, Snow is going to get the f*ck out of there."

With such insight into these areas that need improvement, Oliver does a true civic duty on his show. Next year he might be stuck covering Trump instead, but let's hope there's also time for pieces like these 2016 standout clips.