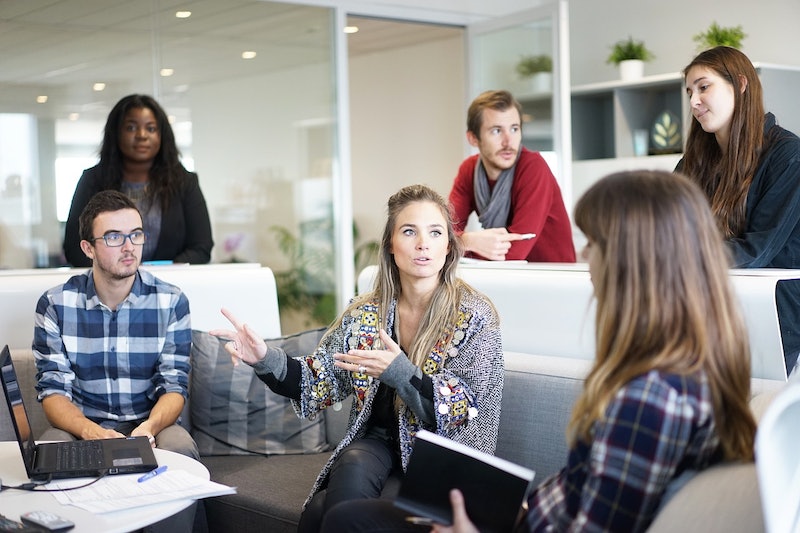 Equal representation for anyone who's not a straight, white, cisgender man in the workplace is an ongoing struggle — and a new survey highlights where the problem might lie. Men responding to the State of Startups 2016 survey replied that the reason their startups don't hire more women and minorities is because there's a lack of qualified applicants. Honestly, though? That's BS. Do they think this is just some weird phenomenon where certain groups of people have an inherent shortcoming when it comes to startups? Of course that's not the case. And what's more, there's plenty of evidence to show that the pipeline isn't the problem — and, what's more, that there's a whole lot we can do to fix what actually is the problem.

The survey, which comes to us from First Round, explored this disheartening trend from over the past year using the responses of over 700 startup founders. And First Round made a startling discovering: Regarding the lack of diversity in startups, men blame the pipeline, meaning the pool of applicants. The respondents said that they want to hire women and minorities, but there just aren't many to choose from. Women, on the other hand, blame "unconscious bias and lack of role models."

We already know the women's claims — that getting hired is challenging for them due to stigmas and sexism outside their control — is true; it's been an issue for years. Look at the disappointing number of women in STEM fields — a result of a number of barriers including stereotypes, gender bias, and the male-dominated climate of these departments in colleges and universities.

Then there's the fact that regardless of how many (or few) women there are working in a certain field, odds are we won't be paid nearly as much. The gender pay gap is alive and well: At best, white women earn 80 percent that which white men earn, and the figures get even worse for women of color. Additionally, people are turned off by women who negotiate due to the fact that we're all socialized to think that it's "unfeminine" for women to take charge, we get paid less in tech fields, and it's harder for women to ask for a raise. What's more, the pay gap is about more than gender, and women aren't the only ones struggling. Bisexual people make less money than straight people, and trans women's pay goes down after they transition.

What gives? Because of the nature of startups — meaning that they largely have to stay ahead of the curve and constantly plan for the future in order to succees — many shape up to be tech-oriented. As we've already established, women and minorities don't exactly have a fair share in the tech field. In fact, a report released by the Equal Employment Opportunity Commission found that 68.5 percent of employees in this field are white. A disappointing 36 percent of women held these positions — and for other minorities, the numbers only get worse. Tech isn't the only problem, either; for example, in 2015, a CNNMoney Analysis found that out of 500 companies in the S&P 500, there were only 24 women CEOs. 24.

But unfortunately for those who claim that the reason behind this disparity is simply a lack of qualified women and minority candidates, that's not at all the case. The reality is there are more than enough people specializing in these fields. For example, as one USA TODAY analysis showed, the top universities are producing black and Hispanic computer science and engineering grads twice as much as tech companies are hiring them. Another report from the National Girls Collaborative Project found that while in 2013, women earned 50.3 percent of science and engineering bachelor's degrees, they only end up making 29 percent of the science and engineering workforce.

So, a lack of qualified women and minorities is clearly no excuse, especially when there are companies like Project Include and Hire Tech Ladies that exist specifically to help companies create a more diverse workplace. And in case anyone was wondering, it is possible to create a workplace environment where women and minorities are more equally represented. Sure, it might take effort. It might not happen as easily or naturally as white male dominance does. But it does happen, and it does work.

Earlier this year, the Bloomberg Financial Services Gender Equality Index — which includes public companies that come out on top in the financial industry in terms of providing opportunities for women — revealed that 92 percent of these companies have strategies in place to hire more women, and 81 percent sponsor educational programs for local women.

It's not just in the workforce that people are making an effort to be more inclusive, either. Harvey Mudd College — the Claremont Colleges consortium's science, math, and engineering school in Claremont, Calif. — gives women leadership opportunities throughout the school and rewards professors based on classroom performance. As a result, half of their computer science major graduates in 2016 were women. So were six out of seven department chairs and 38 percent of their professors school-wide.

Startups (and anyone else) can claim all they want that a lack of applicants is to blame for a homogenous workforce. But the fact of the matter is that the real problem is continued biases against gender, sexuality, and race that permeates education and the workforce. And it's high time we made an effort to dismantle those biases.