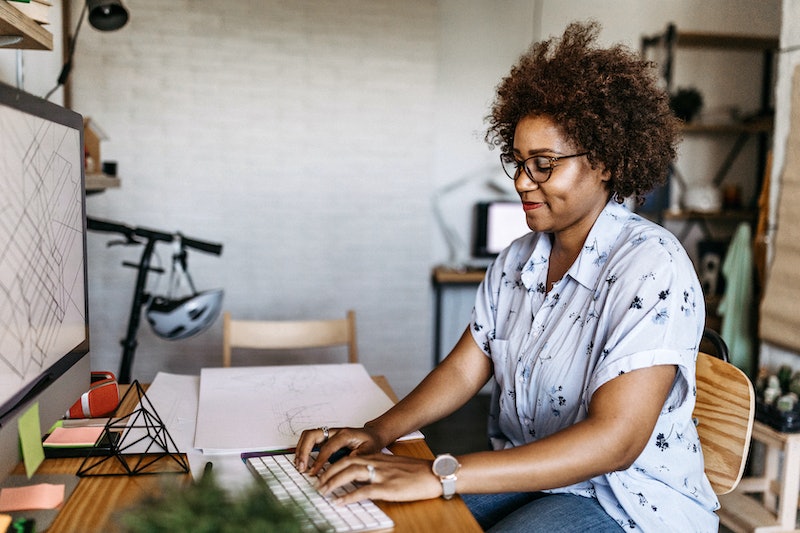 It's a funny time to be living in when we're discussing sending people to Mars, but still haven't figured out how to give women equal pay for equal work performed by our male counterparts. Indeed, it's often even harder for women to ask for a raise than it is for men — which is exactly what a recent episode of Mic's webseries "Skirt the Issue With Jacqui Rossi" tackles. As the video demonstrates, gender discrimination maintains a death grip on the workplace, a fact which can be seen in everything from the pay gap to the rate of promotion. The numerous negative ways women are affected by gender inequality, while men remain unaffected by — or in some cases, even benefit from — are no laughing matter.

We already know that women earn a smaller paycheck than men, regardless of their role or performance. As of 2015, full-time, white women workers were earning 79 percent that which white men made, making for a 21 percent gender wage gap — and that's actually not so bad in the grand scheme of things: The number drops even lower for women of color, with, for example, black women earning 63 percent and Latina women earning 54 percent that which white men make, according to the American Association of University Women (AAUW).

But this isn't where it ends — not nearly. The professional future of women in the workplace looks dim compared to men, and the way we're viewed by our coworkers can impact not just how they consider us as employees, but how they look at us as human beings. To be more specific, requesting a paycheck we've rightfully earned can actually makes people think lesser of us.

All of this sounds very abstract and hard to grasp without putting numbers to it, which is where Mic's video comes in. It paints it all in no uncertain terms — and although it sometimes seems like we just keep repeating the same arguments again and again and again, we're going to keep doing it until someone finally listens.

Meanwhile, men were four times as likely to do the same. Yes, women ask for a raise less frequently than men, and yes, negotiating pay is something worth getting better at. But believe you me: There's a reason we aren't jumping at the chance to ask for a raise. The bottom line is that all the negotiating prowess in the world won't help if the overall cultural climate still believes, however unconsciously, that women who ask for what they want are "bossy" — even if the same behavior is deemed acceptable when it's coming from men.

2. Women Who Ask For A Raise Are Found To Be Less Likable

Men are not. The shock on Jacqui's face says it all. Let me reiterate: Women who ask for raises are liked less as human beings! Why, why, why?

3. Both Men And Women Discriminate Against Women

In one study, hundreds of participants watched both men and women asking for a raise, each person reciting the same exact script. The participants were in agreement that men should be paid more; meanwhile, the participants also said that women who asked for a raise not only appeared aggressive and demanding, but also that their behavior would likely negatively impact their careers.

Again, both men and women share these views. Even we've come to believe that we shouldn't ask for more money. Because that's what internalized, systemic misogyny does.

4. Men Have A Better Shot At Getting Promoted

Why? Simple. They more frequently get the important assignments and projects that lead to advancements in the workplace, according to the Harvard Business Review. This is also why the wage gap begins widening at age 32 — it's hard to keep up, wage-wise, when you're being passed over all the time in favor of dudes.

Obviously, not every case is like this. But is there a trend? Yes. Is it long-standing? Yes. Does it apply to the majority? Yes. This video is yet another reminder of the struggles that women in specific face, by simply being women.

More like this
Beyoncé & Madonna’s “Break My Soul” Remix Honors A Group Of Black Icons
By Stephanie Topacio Long
22 Movies On Netflix That Are Perfect For The Whole Family
By Bustle Editors
How To Use Instagram Story Highlights So Everyone Sees Your Fave Stories
By Brandi Neal and Emma Carey
Your Daily Horoscope For August 12, 2022
By Mecca Woods
Get Even More From Bustle — Sign Up For The Newsletter