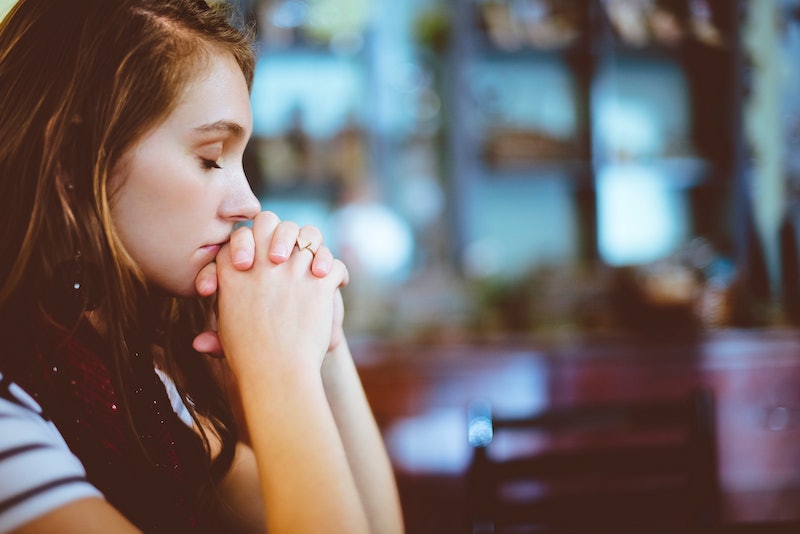 When we think of mood disorders such as anxiety and depression, we picture nail biting, crying, and the inability to get out of bed from under the covers. Although these things do happen, there are a number of other more subtle signs someone has a mood disorder, and they're not always as obvious to pinpoint. Just because you don't fit the textbook definition of something like depression doesn't mean you you're suffering any less than someone who fits the standard mold. Knowing the different signs of mood disorders can help you —or someone you know — get the treatment yo deserve.

"Mood disorders can be hard to spot, as everyone who has them presents differently," says Nicole Martinez, Psy.D, LCPC over email. "Some people become masters at 'presentation management,' where they are are able to 'act as if' they are supposed to act and feel in a situation, even if they do not feel that way at all."

1. Moving At A Slow Pace

People with mood disorders often move at a slower pace physically. Those with depression especially can experience slowed speech, decreased movement, and impaired cognitive function, also known as "psychomotor retardation," according to research in the journal Progress In Neuro-Psychopharmacology and Biological Psychiatry.

"When living with mood disorders, our neurotransmitters and hormones are often in flux, so our sleep cycles are affected," says Jennifer Weaver-Breitenbecher LMHC, CRC over email. Someone with a mood disorder may end up sleeping a lot, or they could find themselves at the other end of the spectrum and find it difficult to fall asleep and stay asleep.

"It's not unusual to see individuals overeat or undereat based on fluctuating mood," says Weaver-Breitenbecher. "Neither pattern points to a particular disorder: Each individual has a different response. Some individuals stop eating when experiencing depression, but others turn to eating as a coping skill."

Sometimes mood disorders can manifest themselves in physical symptoms such as migraines. There is a link between chronic migraines and disorders such as depression and bipolar disorder, according to Healthline, so if you find your head frequently hurts — and you're feeling ups and downs — there could be more at play.

Just because someone doesn't like to wear makeup doesn't make them depressed, but a decrease in personal hygiene or sudden lack in taking care of their appearance is a noticeable symptom. "Some individuals will stop showering or bathing and limit grooming due to fluctuating mood and increased negative feelings," says Weaver-Breitenbecher. "When we don't feel good about ourselves, we tend to manifest that through our appearance."

"When someone who is a consistent person starts to back out of things, not show up for plans, not return calls and messages — this should be a warning sign," says Martinez. "Depressed people find it difficult to impossible to deal with people when they are in this state, and their pulling away is a huge warning sign they are not themselves."

People with bipolar disorder often experience impulsive spending, usually during manic episodes, according to Psych Central. People with anxiety and depression also turn to shopping when they're feeling down, but this can often perpetuate that feeling of isolation and loneliness, according to the Journal of Consumer Research.

Someone with a mood disorder who does not usually get emotional might start crying for what seems like no reason. "They are not really upset about what they lost their composure over," says Martinez. "It was just something that they felt 'safe' to show emotion over versus opening the floodgates of what they are holding in."

Symptoms of mood disorders can be physical, and back pain is common in people suffering from anxiety and depression, according to Everyday Health. Discomfort occurs in areas where people most commonly hold tension, and it can include aches or stiffness up and down the spine and sharp pain in the neck, upper back, or lower back.

"Difficulty concentrating can be a sign of depression that is hard to spot," says Dorian Crawford, PsyD over email. "A person may just seem overwhelmed or disorganized, when in fact, they are struggling with depressive symptoms and a more sluggish cognitive tempo."

"Especially in young adults, mood disorders can look much more like irritability than the more common 'Eeyore' like symptoms of feeling down and out," says Crawford. "If a person has trouble sleeping, has a much shorter temper than usual, has less tolerance to annoyances, and shows an increase in physical activity, they may be struggling with a mood disorder."

If you believe that you are experiencing a mood disorder, it’s best to see a therapist or medical professional for a correct diagnosis.