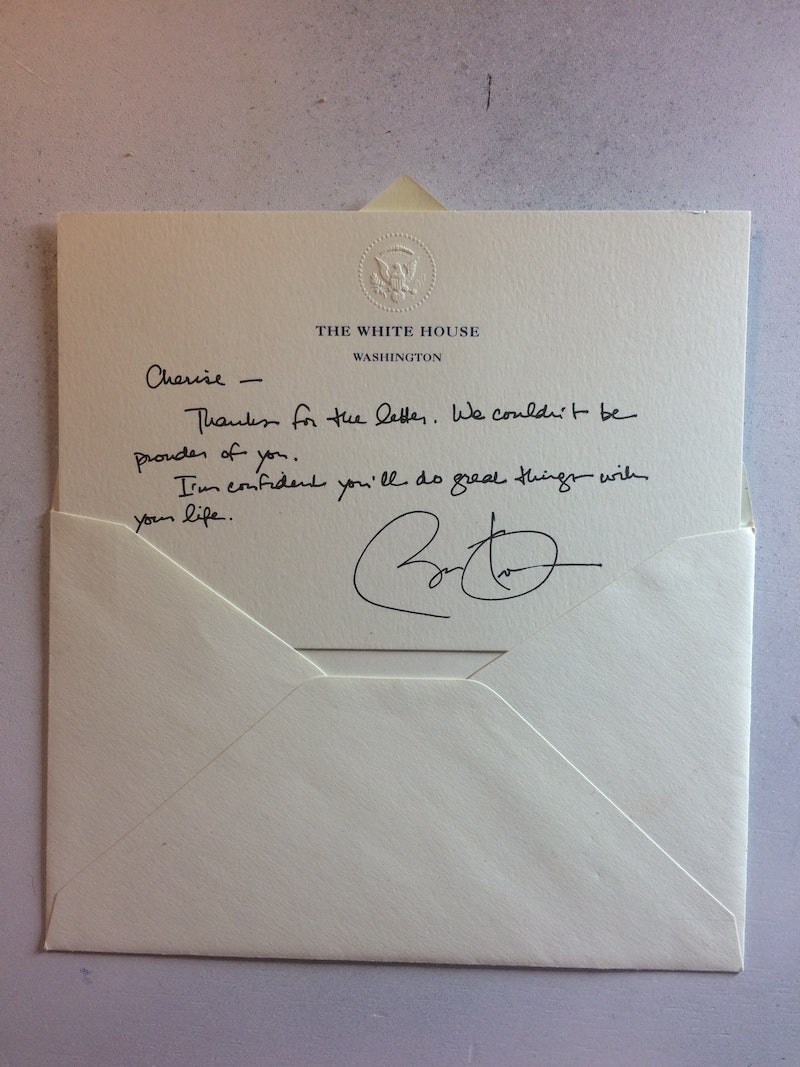 When you won in 2008, I cried and said to my mother, “I finally feel like an American.” It was a feeling that only lasted one night. Americans are supposed to be entitled to Life, Liberty and The Pursuit of Happiness — and if any truth is self-evident to me, it’s that this country entitles our people no such thing.

During your reelection bid, my high school teacher encouraged me to write a letter to you about myself. That same year, unbeknownst to me, someone else would write another letter to you about me. Months later, you surprised me by sending two separate responses, both congratulating me on my “achievements.” The child of a poor, single, loving mother who made it to an Ivy League school on a hope and prayer, I was like you, in some ways.

These notes hung on my freshman year dorm wall above the desk I never sat at. In 2012, I campaigned for you, went door knocking and called phones because I wanted to believe in that sort of thing back then. I wanted to believe the change everyone sought would be as simple as those landslide elections were — but, deep down, I always knew it couldn’t be.

You won again, and I popped champagne. In the last address of your first term, you promised, “We are made for this moment, and we will seize it,” and I wanted to believe you. You worshiped words written by one of the so-called great founders, Thomas Jefferson, a man who helped write laws that stated that “blacks, whether originally a distinct race, or made distinct by time and circumstances, are inferior to the whites in the endowments both of body and mind.” You chose to quote different words by him, declaring,

“What makes us exceptional … is our allegiance to an idea articulated in a declaration made more than two centuries ago: ‘We hold these truths to be self-evident, that all men are created equal; that they are endowed by their Creator with certain unalienable rights; that among these are life, liberty, and the pursuit of happiness.’”

Last week, in your farewell address, you returned to Jefferson’s words, affirming “the conviction that we are all created equal, endowed by our creator with certain unalienable rights, among them life, liberty, and the pursuit of happiness.”

My grandfather’s mother, Big Momma Jefferson-Morris, born into sharecropping, never voted a day in her life. As descendants of the enslaved with the last name "Jefferson," and residents of Central Virginia for as long as any fleeting intergenerational memory could recall, our family folklore always related us to your oft-quoted Jefferson.

My grandfather wouldn’t live to see a Black president. He didn’t want to live to see it — you. He knew no good would come of it.

Her son, my grandfather, John Henry, born into something not-far-from sharecropping, lived and died in rural Virginia, in the house I grew up in. The only life he ever knew was segregation. The only time he ever hung around with white folk was at the baseball games. He knew about the Klan chapter the next town over, and what time of year they would distribute their annual newsletters. He, too, never voted a day in his life, even after the Voting Rights Act passed. He was old school. He never believed in it. He knew this country's so-called democracy, built for white men on the basis that Black people were 3/5 human, was designed to serve white supremacy. He worked a lifetime of backbreaking labor and died poor. He had no faith in a country that had no faith in his humanity.

My grandfather wouldn’t live to see a Black president. He didn’t want to live to see it. He knew no good would come of it. He didn’t want to live to see what it could do to you. Or what it could do to us. How it would change you. And us. He was a few months’ shy of his 92nd birthday when he passed, and after seeing the United States evolve from 1913 to 2004, he didn’t want to believe you would ever do it. A Black president, he joked, would be the coming of a new end. He foresaw the whitelash. All he had to do was stay Black and die. He knew that was the only destiny this country had ever promised people who look like him. Me. You. Us.

My grandfather feared for you, for the world that produced the possibility of you, because, deep down, he knew what it could do to you — and the rest of us. He knew how we’d be let down.

On the day of your first inauguration, which coincided with Martin Luther King Jr. Day, I found the decrepit framed photograph of MLK that used to hang in our living room. Along with those two letters, you sent a signed photograph of the First (Black) Family, which we framed and kept on the mantle next to Dr. King.

When I was a kid, I assumed my grandparents had met everyone, including Dr. King. I couldn’t understand why they’d have a framed picture of someone they didn’t know hanging in their house for decades, and I always heard all the grown folk talk about how All Black folks know each other anyway. They never met Dr. King, but they did, in some small way, all know each other — a little part of each other’s spirit. A feeling.

I watched your hair gray. I watched you with your used-to-smoke-Newports swagger reminding me of every Uncle I ever had. I watched you smooth, acting cute as hell in that Oval Office, like the grown folk used to say. I watched you love a Black woman, and that warmed my heart. I watched her be the best woman, even in the worst of times. The other night, when you cried thanking her and your daughters during your farewell address, it was the only part of you I still believed.

I watched you falter, condemn “rioting” in Freddie Gray’s Baltimore and Black fathers gone “AWOL . ” You condemned the tactics, without unpacking the conditions which necessitated them. During your presidency, I watched Black life after Black life eradicated by the thousands from state-sponsored water crises, inadequate housing and displacement, discriminatory sentencing, police slaughter — the hardships of being crushed under the emotional, psychic and spiritual weight of the terror of more generations than can be counted.

I watched you feel the Spirit and break into song. Amazing Grace, how sweet the sound, that saved a wretch like me.

I watched you, stoic, “this could have been my son... Trayvon Martin could have been me 35 years ago.” I listened to you take it slow, attempt to shape indescribable feeling into metaphors and mannerisms you thought they could understand, and they still couldn’t get it. I watched you try to be the bigger person when hope must have failed you.

It must have been awful to be first Black president of a country built on our blood and sweat. It can’t be easy to live in the highest office of the nation and “wake up every day in a house built by slaves.”

I thank you for being the one to withstand eight years, so we could get wise to what’s really good. Your victory stopped our pretending that someday everything could maybe be OK. And this moment shows us it won’t.

I used to listen to the grown folk rant, He ain't done nothing for Black folks. Ain’t gonna do nothing for us. I write to you now, a few days before your tenure as the first Black president ends, as cynical about the same things as they were back then. They knew that for every policy commitment, and every piece of legislation aimed at bolstering the middle class, our lives would stay the same.

The wealth gap continued to rise. Guantanamo is still open. More than 2.4 million people have been imprisoned in detention facilities and deported. Drones dropped. Silence on matters like Standing Rock spoke volumes. My folks are still uninsured because even the lowest Obamacare premiums were too high for them to afford — but considering how fast the newly-minted conservative Legislative and Executive are moving to dismantle the little good you tried to achieve, that’s neither here nor there.

You did, however, do something very important: You showed us that freedom will take more than our faces in the highest of places. You showed us how misguided stymying our dreams of liberation in symbolism and representation was. You were the parable to let us know that even if we can be the so-called leader of the so-called “free world,” we are still unfree.

I thank you for being the one to withstand eight years, so we could get wise to what’s really good. Your victory stopped our pretending that someday everything could maybe be OK. And this moment shows us it won’t. Being OK isn’t enough, and we should all rather die gloriously on our feet than to live on our knees ok. You’re right, this moment is ours and we will seize it. You let us down only because we were hoping for the wrong thing.

On Election Night night, someone yelled, “kill Obama,” and the next day, I watched you call for unity, knowing it won’t save us. I watched and wondered if any of it scared you the way it scared the rest of us.

I don't remember what or why I wrote to you back then. But I remember when I got those letters from you, all those years ago, I heard the words in your cadence: “we couldn't be prouder of you.” And to you, I say the same: even though you let us down, I’m proud of you for making it out of the Big House alive.

Unlike my grandfather, I lived to see it. A Black president. I watched how it changed you, and how it changed the rest of us. The grown folk used to say, you got to love everybody despite everything. In a legacy of loving despite the letdowns, I’ll always have at least a little love for you.