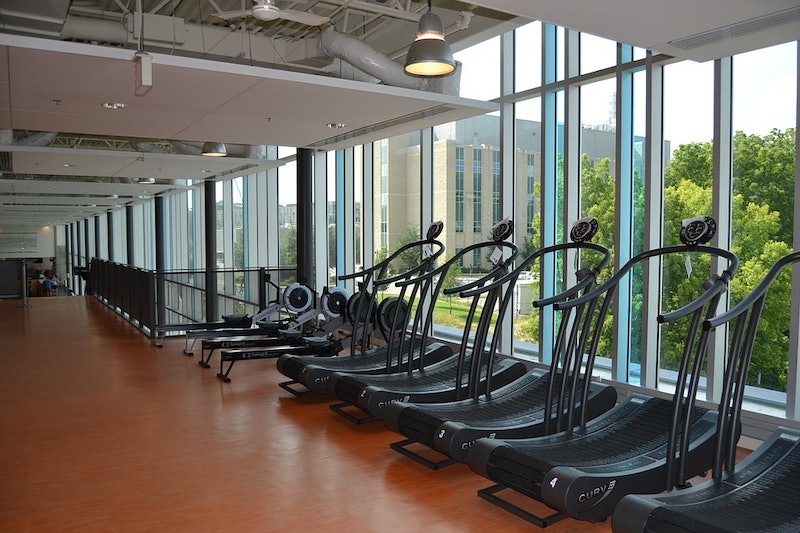 Working out is awesome, so it definitely sucks when you head to the gym and have to deal with gross comments and creepy behaviors from those around you. Before throwing out your sneakers, though, look for creepy signs from people at the gym in order to avoid them and focus on your own exercise and performance, instead. As long as you do you, you should be fine. If you feel unsafe at any point, however, don't be afraid to speak with someone who works at the gym to calm your nerves.

As a certified health coach, I work with clients on finding ways of exercising that provides happiness and health benefits and invigorates them for the day ahead. If you're able to find an anxiety that makes you feel accomplished and confident, there's no point in giving it up due to weird advances or behaviors from the gym crowd. Creepers at the gym definitely exist, and you're bound to witness some forms of interaction from time to time. Instead of freaking out, just take the behavior for what it is and try and separate yourself. Here are 8 creepy things that people at the gym might do, so that you can be more mindful during your next spin class.

If there's someone at the gym who is constantly staring at you during your workout, it can feel pretty uncomfortable, explains Erika Hammond, Founding Trainer at Rumble Boxing over email with Bustle. Instead, "don't make eye contact and keep your headphones on," advises Hammond in order to keep the distance. If you're noticing a creeper, don't be afraid to talk to management for additional protection.

2. Not Cleaning Up After Themselves

While it's not super creepy to sweat everywhere and do nothing about it, it's definitely gross. It's totally OK to sweat, advises Hammond, but you should have the decency to wipe down your machines after use so that you can prevent spreading germs to future users. Hammond recommends getting a towel upon entering the gym in order to be prepared post-workout.

3. Hitting On You During The Workout

Some conversations just aren't called for, especially when you're running on the treadmill and nearly out of breath. While some people do consider the gym a social environment and look to make friends, it's all about detecting the situation and being appropriate. Hammond says, "Some people just don’t understand you go to the gym to workout and not for a social scene." If the conversation gets inappropriate, which it may, it's worth speaking to management at the gym or politely saying that you don't wish to chat.

It's easy to sometimes feel intimated by the weight room, but it's so important for good health, and all people should be encouraged to hit the weights, advised Adam Rosante, fitness and wellness coach, and author of The 30-Second Body over interview with Daily Burn. If someone speaks to you in a condescending or inappropriate manner, acknowledge it, and then say you're not interested in having a conversation. All people should feel confident and able to use weights as much as they like.

Unless you're a trainer, you should keep your opinions on someone's use of a machine, form, or exercise performance to yourself. Sometimes creepy people might comment on your workout, as if he or she is trying to teach you something, explained Tony Gentilcore, CSCS, co-founder of Cressey Sports Performance in Hudson, MA over interview with Daily Burn. Susan Ferreri RYT of L'ifestyle Lounge says over email with Bustle that you can "let them know that you appreciate their advice but don't need it." It's OK to be "blunt and honest," Ferreri says.

According to Par Deus on Bodybuilding.com, sometimes people mutter curses or say things to themselves when doing reps or checking out themselves in the mirror. If that happens, try to ignore it or go to a different space if it bothers you. Everyone is entitled to whatever workout makes them feel their best — and sometimes these kinds of noises are associated with weight lifting, so it might actually be more normal than you think.

According to Ryan Barnhart, MS, PES, is a certified Performance Enhancement and Injury Prevention Specialist through the National Academy of Sports Medicine (NASM) in interview with Fit Day, grunting at the gym can be annoying and creepy to some people. If you hear someone grunting around you, either put on your headphones to block it out or move to a different machine.

8. Being Inappropriate In The Locker Room

Mikey Rox, principal at the New York City creative firm Paper Rox Scissors, explained over interview with Today that there are some creepy people who self-pleasure or self-relax in the locker room, such as in the steam room or sauna, for instance. Doing this behaviors in public is totally unacceptable and actually illegal. Save it for home. If you see someone doing this, alert management asap.

If you notice any of these icky behaviors, don't freak out. Keep your distance, but if it proves to be worrisome or offensive, consider speaking with a manager at the gym to address the issue. Creepy people exist, but don't let that deter you from getting in a sick workout.

More like this
How To Protect Your Digital Privacy If You Need An Abortion Post-Roe
By Kaitlyn Wylde
How 5 People Upended Their Lives To Fight For Abortion Rights
By Hannah Smothers
Eleven From ‘Stranger Things’ Is A Cancer Zodiac Sign, An Astrologer Says
By Brittany Beringer
6 Abortion Advocates To Follow On TikTok
By Sara Youngblood Gregory
Get Even More From Bustle — Sign Up For The Newsletter