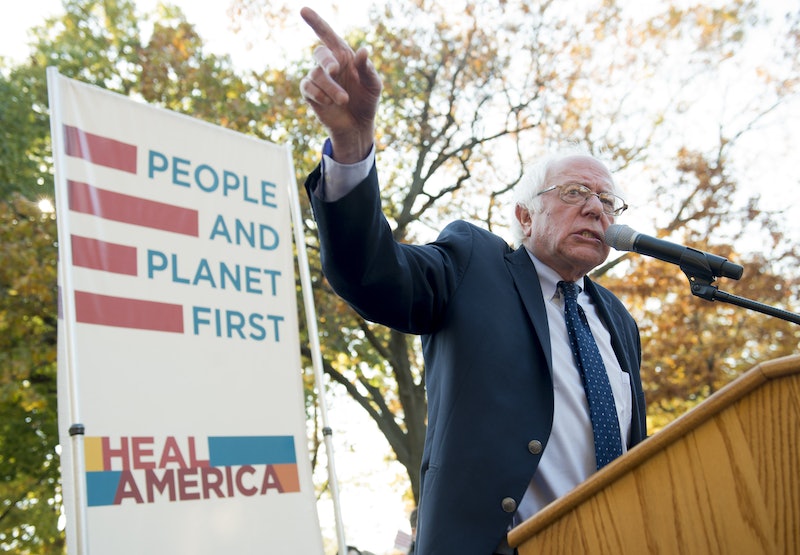 Since the presidential election results rolled in on Nov. 8 and shocked the nation, various vote recount efforts have caught the attention of most major political parties, as well as citizens hoping to avoid a Trump presidency . Though former Green Party presidential candidate Jill Stein has spearheaded the majority of the efforts, Bernie Sanders has weighed in on the vote recount rather candidly. On Nov. 27, he told CNN, "The Green Party has the legal right" to a recount, and he's been supporting the efforts from the sidelines while dismissing President-elect Donald Trump's calling the recount a "scam" and claiming that it's hypocritical of Democrats.

In an interview with Democracy Now's Amy Goodman at the Free Library in Philadelphia, Sanders talked about how recounts are nothing new and stated that people have a right to them. "I'll tell you what it touches on, why it is touching a nerve, is not because I believe that it's going to reverse the results," he said, suggesting that we should go back to paper ballots as Canada still does. He added, "But this is what people, especially with all of this barrage of attacks on websites and so forth, are really wondering, whether when they vote, is their vote legitimate?"

Sanders went on to elaborate on what was perhaps the most important takeaway from his Democracy Now interview. "There's talk: Have the Russians interfered in this thing?" And that question is completely legitimate: In early October, the Obama administration announced that it believes Russia's government interfered in the presidential elections via hacking email accounts among other things.

Hacking or not, the recount, as Sanders sees it, is simply part of the election process. During an appearance on ABC's This Week, Sander insisted that voters keep up with the recount and see it as "not a big deal," and not being driven forward by Democrats. Former presidential candidate Hillary Clinton and her campaign have not initiated the vote recount, but are participating in it, which Sanders sees as no surprise. "Well of course they joined in," he said. "We will see what happens. It's a legal right. It's not a big deal. I don't think anybody, Secretary Clinton or anybody else, thinks that there's going to be profound changes. And we will see what happens."

It seems Sanders will continue to support the efforts of monitoring the voter recount, even though the potential for faithless electors to sway this election is quite slim.