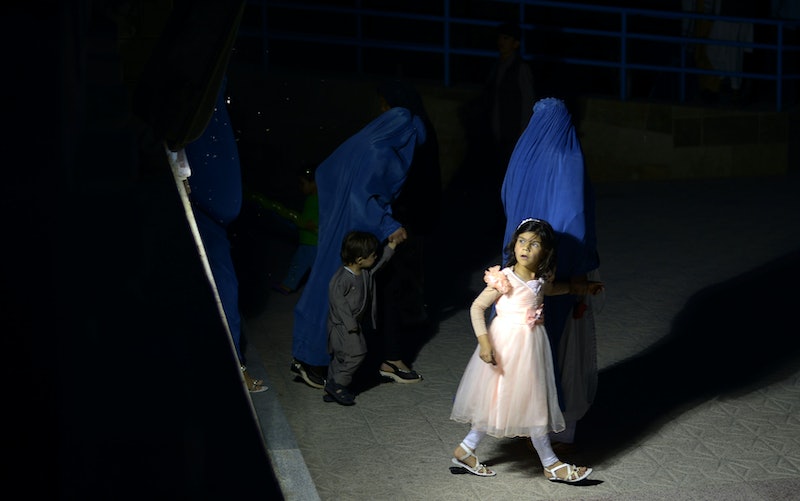 There was a brief period of time when it seemed like the current German Chancellor might be one of the last voices of reason in the rising tide of European Islamophobia. On Dec. 6, all hopes of tolerance from Germany's highest offices were dashed when Merkel called for a ban on the burqa, a full-faced cover worn by some Muslim women, wherever it's "legally possible." This deplorable attack on religious freedom is certainly worth discussion, but Angela Merkel's burqa ban shouldn't be surprising to anyone who's observed the growing discrimination built upon Islamophobia in Europe and the United States.

Given Merkel's seemingly tolerant attitude towards Middle Eastern refugees that resulted in one of Europe's most open refugee policies, warning signs about German Islamophobia have been presenting themselves for a while. In June, a survey revealed that more than 40 percent of German respondents believed that Muslims shouldn't be allowed to enter Germany. Anti-refugee and immigrant sentiment, fueled by Germany's anti-immigration Alternative for Germany party, seems partially to blame for a massive spike in attacks against refugee shelters in the country. There were a startling 300 recorded attacks in the first quarter of 2016 alone. Merkel, who is seeking a fourth term, appears to be taking a hard-lined approach against immigrants to achieve her political ends.

Though The New York Times wondered if Merkel was "the liberal West's last great defender" in the days following Donald Trump's election, the reactionary pronouncement now seems foolishly premature. At first, it seemed as though Merkel's burqa ban announcement broke from her previous stances that welcomed Muslim refugees and condemned other European powers for allowing reactionary Islamophobia to control their politics. However, it's now clear that even she cannot stem the tsunami of Western Islamophobia alone. Between the ISIS specter invoked during the Brexit referendum, the massive xenophobia of Trump's election, and, most recently, Italy's shocking anti-EU populist referendum that resulted in the resignation of Prime Minister Matteo Renzi, anti-establishment anger is extremely popular on both sides of the pond. Unfortunately, it's ridden in on the backs of those seeking to escape war zones.

For all of her legitimately progressive decisions regarding Middle Eastern refugees, Merkel's anti-burqa statements belie a deeply Western worldview. In saying the burqa "does not belong to us," and claiming that Germans don't want "any parallel societies" and won't honor any "tribal rules, codes of honor, and sharia," she perpetuates belief in the fallacious "clash of civilizations," a xenophobic dog whistle for all those who fear the rise of non-European immigrants. Here's hoping that Europe has as dedicated a resistance to this kind of protectionist bigotry as we do here — and that eventually, both anti-discrimination movements can work together to push against the waves of regression and civil rights violations to come.