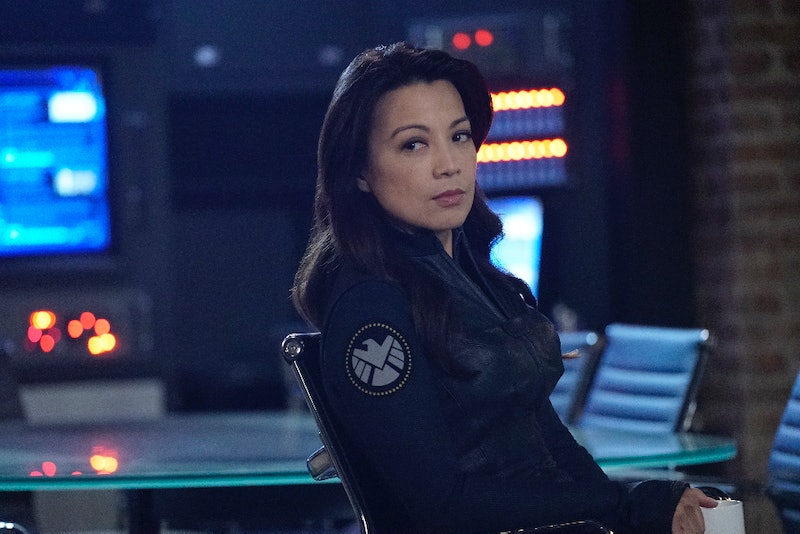 Fans who 'ship Coulson and May on Agents of S.H.I.E.L.D. with each other, or with happiness, should have known than to get excited for any forward motion. As soon as they start flirting over drinks, it is revealed that the May hanging out with Phil is actually a Life Model Decoy. More importantly, is May dead on Agents of S.H.I.E.L.D. ? At the very least, the Agent has been kidnapped by AIDA, which is very bad news and two cliffhangers wrapped into one.

The "real" May was last seen unconscious and locked up in Radcliffe's lab, where she was supposed to be bringing the LMD in to the new Director. AIDA brought water and a wet cloth to wipe blood off of her face and neck. It's unclear whether or not she killed her. I don't think she did, but the fact that May has already been duplicated makes it a possibility for the time being. It would be a bummer, but she could easily have been replaced, the way "Ward" was still on the show long after his technical death.

So, there's no doubt that the Darkhold affected AIDA now. She also killed at least one agent, and according to the promo for the next half season, it's going to be all about Evil AIDA and the LMDs. I suppose this is who the "brain" AIDA was making in last Tuesday's episode was for — at least, I hope it is. How many more LMDs did AIDA make? Even if May is alive, this possessed robot situation is dangerous and deadly.