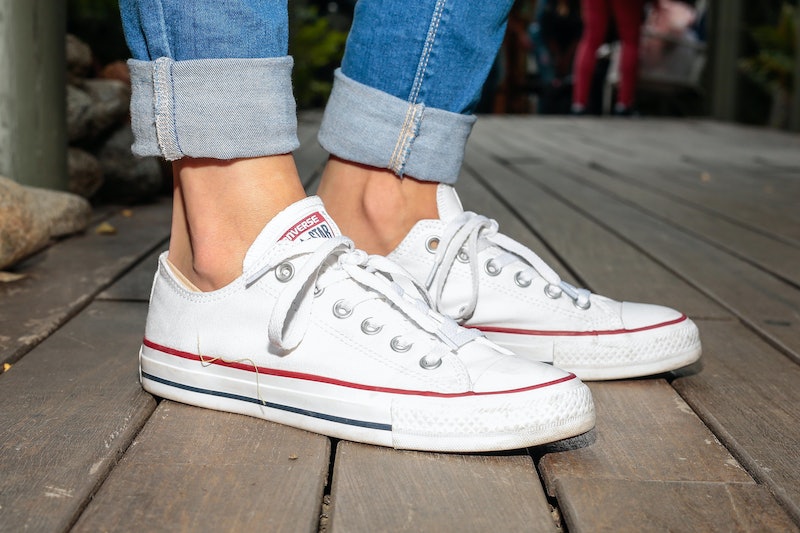 If you have even a vague interest in dressing yourself, chances are you've had at least one pair of Converse Chuck Taylors in your life. After all, the shoe suits all styles: Despite their obvious differences in appearance and taste, celebrities like Wiz Khalifa, Mila Kunis, Blake Lively, and Kurt Cobain are all fans of the quintessential sneaker. But how did Converse become the fashion icon they are today? All Stars are actually a century old, and have an extensive history to match.

The original Converse company was set up in Malden, Massachusetts in 1908 by Marquis Mills Converse, who called his new venture the Converse Rubber Shoe company. The company's first several years were profitable enough to keep the brand running, but it was the transition to producing basketball sneakers in 1917 that really shifted Converse from a simple rubber shoe to the cultural icon it is today. The kicks were given the name "Converse All Stars" as a nod to their athletic design.

When basketball Hall of Fame alum Chuck Taylor lent his name and signature to the trainers in 1921, they became the basketball shoe. Basketball's inclusion in the 1936 Olympics only meant more publicity for the now-popular Converse All Stars, made all the more compelling by American's win against Canada.

Chucks made the leap from athletic wear to alt fashion in the 1950s, when the classic black and white version became part of the youth rocker uniform. Rebel without a cause James Dean cemented their iconoclastic status when he appeared in several photographs wearing his Jack Purcell Converse kicks. Though historically associated with athleticism, Chucks began moving out of the realm of sports and into the realm of chillin'. In the succinct words of Ice Cube:

It's crazy to think that them basketball cats played in Chuck Taylors. I got Chucks in my suitcase right now, but that shit gives you flat feet.

The shoes went through a series of design and marketing incarnations through the following years, but in the 1970s, Converse introduced the One Star, a precursor to the classic design we know today. The One Star featured a streamlined suede design with a star accent on the side, and quickly became the brand's other bestseller.

The Ramones were famously reputed to favor the sneakers for work and play, but in reality, the band initially wore PRO-Keds and later transitioned to Chucks. Drummer Tommy Ramone stated that though he favored the shoe, he was unclear on who Chuck Taylor actually was:

He was maybe a basketball coach or something. I don't know. He made cheap shoes.

The 1980s became yet another crucial decade for Converse, starting in 1984 when the company was named an official sponsor of the Los Angeles Olympics. Despite Ice Cube's assertion that the shoes weren't ergonomic, the U.S. walked away with a gold medal in basketball wearing the shoes.

But when we think of Chucks, it's not their basketball legacy that springs to mind — it's the counterculture icons who wore them in the 1980s and 1990s. Chucks became the shoe of choice for rockers and rebels in the mid-'80s, spurred on by unofficial endorsement by bands from Guns N' Roses to Pearl Jam's Eddie Vedder.

Grunge stars Kurt Cobain and Winona Ryder rocked All Stars into the '90s — the dirtier, the better. The look was later borrowed by Green Day and the All American Rejects, cementing the shoes as a mass market staple. By the end of 1997, the company reported it had produced 550 million pairs over the course of just a single year.

But by 2001, rumors that the company was actually financially failing prompted a mass hysteria and public display of devotion to Converse. The company's financial woes were no mere gossip, and in 2003 Nike purchased the floundering Converse company. Though die-hard Converse fans may have scoffed at the company's decision to sell out to a more mainstream corporation, the settlement ultimately salvaged the company and resulted in countless innovative reincarnations of the famous shoe in the decade since.

These days, Converse seems to be in fine shape. In September 2013, Bloomberg Businessweek reported that "sales of the vintage Converse brand increased 16 percent, to $494 million, in the recent quarter, while earnings before interest and taxes jumped 36 percent," putting Chucks before Nike's own innovations in terms of profitability. Converse has hopped aboard the designer collaboration train in a big way, and this year alone, we can look forward to a Black Sabbath x Nike collaboration, as well as a Simpsons-themed collection.

If we had to guess, we'd wager Chucks will never go out of style.

More like this
The 8 Best Fitbit Bands For Sensitive Skin
By Lauren Moison
Prefer Alcohol-Free Perfumes? Water-Based Fragrances Are On The Rise
By Audrey Noble
12 Absolutely Angelic Cherub Tattoo Designs
By Paris Giles
The Body Shop’s New Range Has More Antioxidants Than Retinol
By Justine Knight
Get Even More From Bustle — Sign Up For The Newsletter