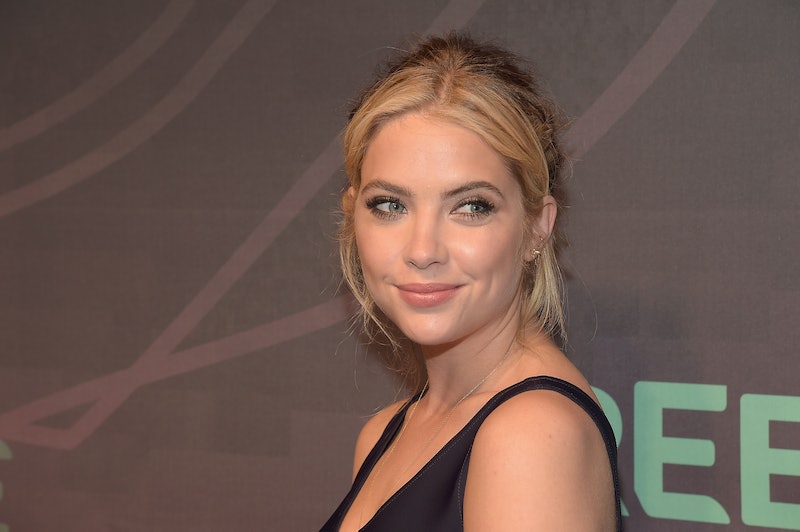 Best known for her role as Hanna Marin on the cult-favorite show Pretty Little Liars, Ashley Benson and her career are currently in a bit of transition period. PLL is coming to an end in April after seven seasons, and Benson just made a huge move to New York City from Los Angeles. But that doesn't mean Benson is slowing down. In fact, Benson tells me at an event for PayPal's charitable Giving Tuesday campaign that the end of the show has given her a chance for her to focus on things that give her satisfaction outside of TV.

While Benson has said she'll certainly miss working with her PLL family, she's not all sad about the show reaching its final season. Benson's massive fan base may see her as basically synonymous with Hanna, but the actress tells me that IRL she couldn't be more different than her character — especially when it comes to fashion. After years of full glam treatment every day for PLL, Benson welcomes the chance to embrace her own personal style.

"I used to care what I look like...of course I want to look good when I go out, but just having to dress up every day and be in hair and makeup for a job every single day and wear heels... all that stuff. It's so uncomfortable. I'd rather look a mess than look put together," Benson says.

"As far as fashion...I hate wearing heels, I hate dressing up. I'm more of a relaxed tomboy...sweater, sweater with Converse and boots. Funny because Hanna on PLL is like super fashionista, which I'm not," Benson says. "I literally wear like socks with flip flops and sweatpants and I think I look great."

When it comes to dressing every day, Benson says she just wants to wear what makes her feel best and more often than not, that means prioritizing comfort.

"I feel good. That's the thing, I dress to where I feel comfortable. I don't care how crazy I look, I just want to be comfortable," Benson says.

And while Benson is certainly no stranger to walking a red carpet and slaying a totally glamorous look, her everyday style is probably a lot more like yours than you think.

"I'll look put together when I need to, but as far as every day... I'll be in pajamas," Benson says.

Benson tells me that having some time off work also gives her the opportunity to invest even more time in charities that she's excited about.

Benson tells me that having the chance to be involved with something like Giving Tuesday gives her a personal "joy and satisfaction." Benson says that "besides just doing stuff for TV, I can actually do it for myself."

"It's really cool that I do have time to do things like this...with having a platform like we do that the show's provided us, I think it's really cool to show people that it's important to do small acts of kindness, and not just during the holiday season," Benson says.

So if you already have the whole pajamas-as-regular-clothes thing down, go ahead and add some volunteering to your schedule this season and you'll have a totally Ashley Benson-approved holiday. Perfect.