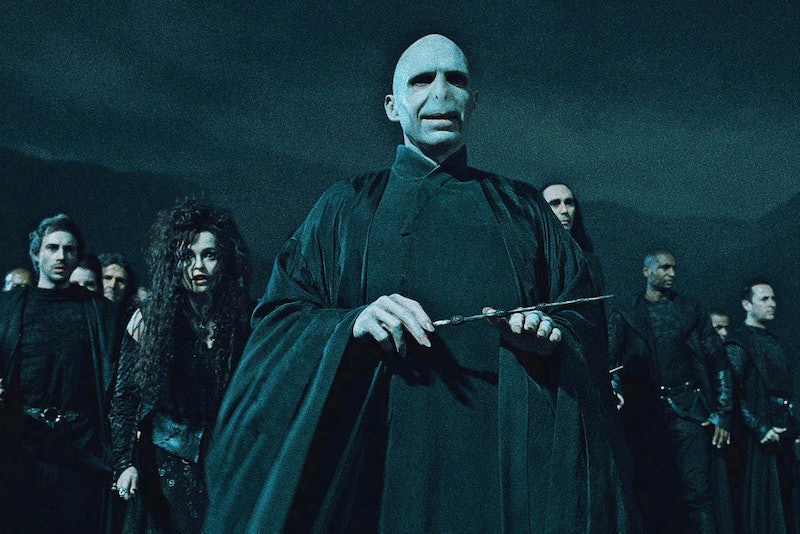 So. Here we are, America. It's been about a month since election day, and a lot of us are still feeling that queasy sort of "is this the end of the republic?" feeling in the pit of our stomachs. Well, in times like these, we naturally want to turn to our favorite anti-fascist boy wizard for help: here are a few very real political lessons we can learn from Harry Potter.

Many people have been turning to Harry Potter for comfort in this post-election world of ours. And look, if it upsets you that people are viewing complex, real-world politics through the lens of a beloved children's series about magic, I get that. The Harry Potter series, like all good and wonderful things in this world, is not without its flaws (I still maintain that Snape is the worst, and Snape apologists can fight me). But if Harry Potter helps you to deal with the post-election trauma, then I say go right ahead. J.K. has been pretty open about the anti-racist, anti-fascist themes in her books, and most of her fans tend to fall on the socially progressive side of the political spectrum.

So reread Harry Potter, if it makes you feel better. Tweet about joining Dumbledore's Army. But remember that Voldemort wasn't defeated with quotes about love and Deathly Hallows jewelry alone. He was defeated with decisive political organizing, civil disobedience, and a whole lot of effort:

Please oh please fact check your news sources. Twitter is not news. Memes are not news. There are a lot of Rita Skeeters out there, looking to make a quick buck spreading misinformation. Even The Daily Prophet was overrun with Ministry propaganda by book five, leaving the poor Quibbler to try and cover the actual news of Voldy's return. If Order of the Phoenix taught us anything, it's that free press without government interference is vital to defeating evil wizards (and also that Harry is terrible with the ladies).

Bank robbing, dragon-freeing, forming illegal societies, sneaking out of bed in the middle of the night—it's no wonder that some people have critiqued the Harry Potter books for advocating anarchy. And while I wouldn't quite go that far, it's fair to say that if Harry & Co. had followed all the rules from the start, Voldy would have gotten the sorcerer's stone back in book one, and there'd be no series at all. Without Dumbledore's Army, none of the kids would have been able to defend themselves when the Death Eaters came calling. Sometimes breaking the rules is not just justifiable, but necessary to survive.

While it's hard to argue that any part of Harry Potter is underrated, one of J.K.'s strengths is how Harry's seemingly minor acts of kindness come back to help him. Harry freeing Dobby in book two is the reason that Dobby can come back to save them. Harry sparing Wormtail is the reason that Wormtail falters and lets them go. Harry saving Draco Malfoy's ungrateful hide from that nutso magical fire is the reason that Narcissa protects him from Voldemort in the end. Large scale political change is important, but so is standing up for your values on a smaller, more personal level.

I think everyone can agree that the Harry Potter books are pretty clearly anti-bigotry (you get 'em, Hermione). But a subtler point the books make is how bigotry and injustice can be normalized. Hermione's S.P.E.W. campaign is laughed at, because all the wizards are like "...meh, the house elves don't even want civil rights, probably." Dementors are clearly evil (like maybe a little too overtly evil, tone it down, Jo), but people accept that Dementors are used to torture prisoners in Azkaban because it's the norm. It's frighteningly easy for any level of injustice to start feeling just kind of... normal.

5. Learning is a political act

Ask almost anyone who grew up with HP, and they'll tell you that the most hateful character in the series is Dolores Umbridge. Not Voldy. Not the Death Eaters. Umbridge. She's the worst. And I think that's because everyone has encountered a real teacher like Umbridge: someone who cares more about following the rules than teaching children the truth (and who likes ugly kitten decor). With the whole D.A. thing, the kids decide to take learning into their own hands, and that's a pretty fantastic lesson: if the powers-that-be haven't taught you what you need to know, seek out knowledge on your own.

6. Even good people can have internalized prejudice

Oh, Ron. Sweet, goofy, kinda-racist Ron. Sure, he's everyone's third favorite of the Golden Trio, but his character development is simply brilliant. He unlearns all kinds of toxic nonsense over the course of the series. He hates giants and werewolves... but he gets over it, because Hagrid and Lupin are harmless cinnamon buns. He's a misogynistic teenage boy... but prolonged exposure to Hermione forces him to respect women more. He thinks house elf liberation is silly... until he wants to save the house elves during the final battle, prompting Hermione to deem him evolved enough to make out with. Ron is proof that even kind, funny people with good intentions can harbor ugly beliefs (and unlearn them!).

7. There is no chosen one

Yeah, yeah, I know Harry Potter isn't the most subversive deconstruction of the "chosen one" narrative in the world... but one of the major lessons of the series is that our choices matter more than our fate. How does this translate into politics? Well, it's easy to feel like you're not the right person to change things, or that you don't have any power against the forces of international government interests. But if Neville Longbottom can kill a giant snake with a sword, you can definitely call up your congressperson. Everyone can make an impact on some level, chosen one or not.

Magic! Whimsy! False imprisonments! The Wizarding World goes from fantasy playground to corrupt government structure over the course of the first few books. We get the message that we shouldn't trust authoritarians like Dolores Umbridge, or even the initially well-meaning Cornelius Fudge. But even "good" authority figures like Dumbledore do some definitely shady things. Harry is forced to learn again and again that just because someone makes the rules, it doesn't mean they're right. People in power don't deserve automatic respect, they have to earn it.

It's tempting to look back on Harry Potter as a story of the inevitable triumph of good over evil. And, while that interpretation has some merit... eh, not quite. Harry doesn't defeat Voldemort alone, he defeats Voldemort through organized resistance. His ability to love is what tips the scales, but his (well, Hermione's) ability to plan concrete action, educate others, and band everyone together is all an integral part of their victory. So read the books, tweet the quotes, and wear your Gryffindor scarf proudly. But you should also donate to political organizations, attend meetings, and research ways to take concrete action. Harry would want you to.