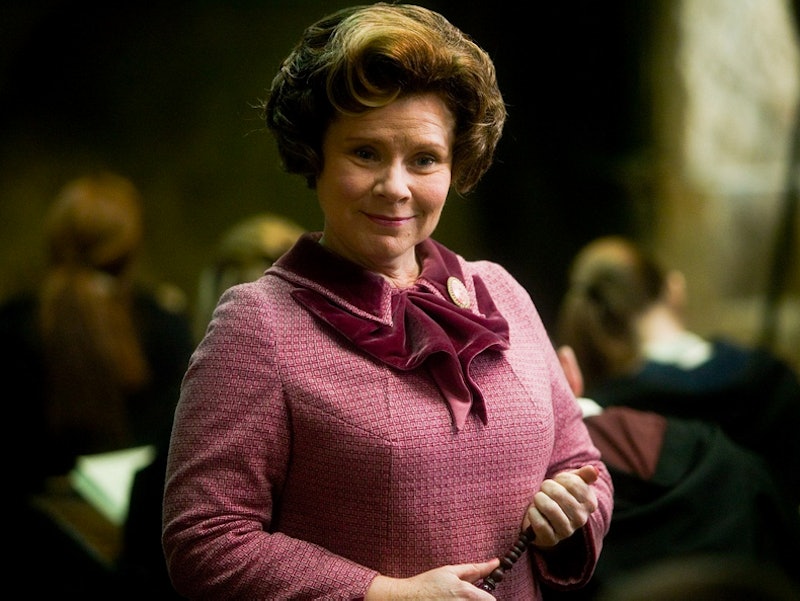 This might be the only time Harry Potter fans won't call for a spin-off movie based on one of J.K. Rowling's Pottermore stories. On Friday morning, J.K. Rowling released a new story about Dolores Umbridge on Pottermore that justifies every Potter fan's hatred they've been harboring for this woman since Harry Potter and the Order of the Phoenix book was released in 2003. Rowling's short story does nothing to make excuses for Umbridge's absolutely nasty behavior — actually, it makes the reader dislike the Ministry of Magic employee and failed Hogwarts professor (can we even call her that?) even more. Yes, that's apparently possible and it's made even more possible by the fact that Umbridge is loosely based on real people J.K. Rowling met.

Obviously, the great, powerful, and kindred Rowling is quick to admit that she's "wary" of discussing these types of inspirations because of how her words might be misinterpreted. But, it seems pretty straight-forward that, while these women never actually did anything to harm Rowling, she just didn't like them. And, well, that's quite enough for me — I have this deep devotion to Rowling where I'm willing to trust her judgment of character. I mean, this is the woman who gave us Harry Potter, the noble, kind, Boy Who Lived, she definitely knows a thing or two about first impressions and which people are good and which, like one of the women she mentions, are pure evil masking their darkness with photos of fluffy kittens.

So, while I try to wrap my head around how there are real people in the world that attributed to Dolores Jane Umbridge's terrifying persona, here are 9 Harry Potter film moments that made fans hate Umbridge as much as Rowling does.

When She Was Condescending To Professor McGonagall

So unacceptable. I can't even stand it.

When She Made This Face

Oh, did I mention she interrupted Dumbledore's speech AND made this face? #fuming

The Way She Drank Tea

Absolutely one of those people that do everything to piss you off.

The Way She Stirred Tea

When She Smiled At Harry's Pain

Sick, evil witch — how DARE you?

Every Time She Said This

When She Said This About Lupin

Again, how dare you?

When She Smacked Harry

I'm sorry, I have to walk away now before I do something I regret.