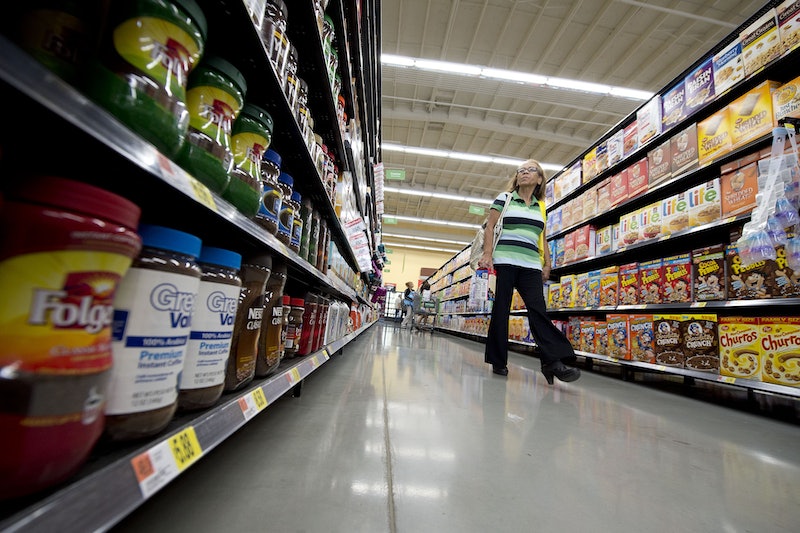 Finally, science has proven that the Cap'n Crunch mascot is just as creepy as you always suspected. A new study shows that characters on cereal boxes are psychologically calling out to your kid, screaming, "Buy me!" Kids' cereal boxes are usually positioned lower on the cereal aisle, where the characters' eyes are drawn to make direct contact with their prey. What happens next is obvious: The kids freak out until their parents buy it.

Just look at that box. Does it look like the Cap'n is eyeing you? That's because he is, say Cornell University researchers in "Eyes in the Aisles: Why is Cap’n Crunch Looking Down at My Child?" The creepily-named study found that characters on cereal boxes are drawn to make eye contact with the consumer and positioned for that consumers' eye level. Which kind of explains why kids' cereal characters have such oddly downcast eyes. According to the study:

Any kids' cereal character with downward-cast eyes is implicated in the sweeping cereal scandal. That means you, Trix Rabbit, and you, Sonny the Cuckoo Bird. This totally explains why your rabid children won't leave the cereal aisle until they're clutching a box full of marshmallows with a giant-eyed leprechaun on it. Yes, Lucky, they're actually after your Charms.

The researchers end with some friendly advice:

If you are a parent who does not want your kids to go “cuckoo for Cocoa Puffs,” avoid taking them down the cereal aisle.

The study was careful to point out that just because the characters call out to kids in the aisle doesn't mean the way the characters are drawn is intentional. But we're pretty sure that the creepy Cap'n hides some secrets — or, you know, a bunch of market research — behind those bulging eyes.

But science, you might be asking, how do you explain the allure of Reese's Puffs, which doesn't have a mascot? Oh, because that's candy-turned-cereal. Right.

More like this
TikTok's Favorite Bartender Thinks Mimosas & Bloody Marys Are Out For Brunch
By Alexis Morillo
If Your Refrigerator Is A Mess, These 25 Organizing Products Can Help
By Courtney Young
The 'Hocus Pocus' Sequel Finally Has A Release Date & It Makes Total Sense
By Shannon Barbour and Radhika Menon
9 Honestly Unbelievable Revelations From The WAGatha Christie Trial
By Frances Stewart
Get Even More From Bustle — Sign Up For The Newsletter