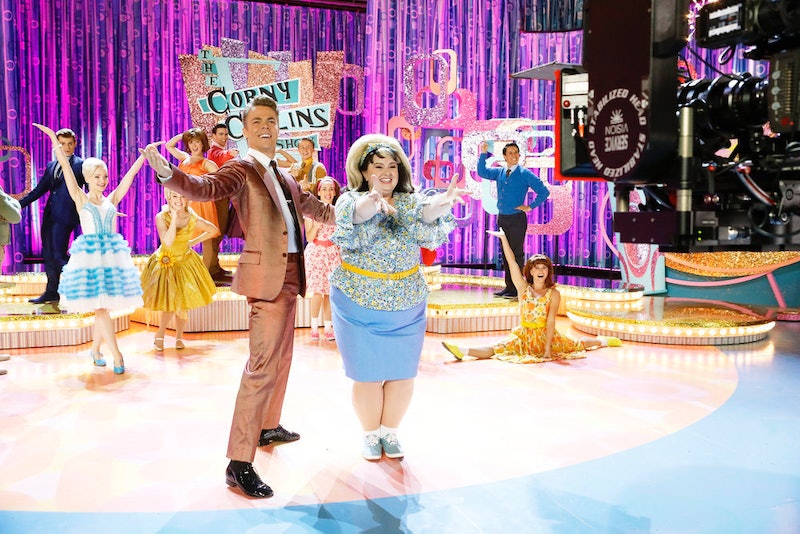 In a world of remakes, reboots, and sequels, the same story often finds itself getting re-used and adapted to new formats every few years. This is especially true in the world of musical theater, where it seems that every Hollywood movie, be it Rocky or Kinky Boots, gets a musical adaptation. Hairspray is one of the earliest examples of the 21st century's love of musicals adapted from films, and has since been re-adapted to a movie based off the Broadway musical. Now, Hairspray Live! comes to NBC — marking the first made-for-television incarnation of the story. But since this version is now three adaptations removed from the original, there will surely be some differences between Hairspray Live! and the Hairspray movies.

Each version of Hairspray tells the same story: in Early 1960s Baltimore, Tracy Turnblad's dream is to be a dancer on The Corny Collins Show. When she does land a spot, she begins fighting against the show's racial segregation policies to create a more inclusive Corny Collins Show. While that core story remains the same, each version has different flourishes that differentiate each installment from the last. Here are a few of the changes that Hairspray Live! is making to stand-out amongst the crowd.

The biggest difference between Hairspray Live! and the 2007 Hairspray film is the inclusion of two songs that were cut from the film. The song "Mama, I'm A Big Girl Now" was one of the stand-out songs from the Hairspray musical, but it and the song "Cooties" didn't survive the jump from stage to screen. Film director Adam Shankman told Broadway World that "The scariest [song] to approach them all about is "Mama I'm a Big Girl Now". It's a fan favorite, and one of my favorites too, but ... I'd have to shoot it like the movie version of [complicated Bye Bye, Birdie musical number] "Telephone Hour". One other thing; it doesn't further the plot! I'm truly depressed, because I love the song, but honestly it lifts right out of the script."

Luckily for fans, Hairspray Live! is able to provide a more accurate presentation of the live musical and will finally be bringing "Mama, I'm A Big Girl Now" and "Cooties" to screens everywhere.

Hairspray Live! and similar live broadcasts of musicals are a dream-come-true for theater fans the world over who don't have access to Broadway shows — but Hairspray Live! might be pulling a major risk by switching out the closing number. In the original musical and film adaptation of the musical, it closes with the jovial, bombastic "You Can't Stop The Beat." The classic closing number will still be in the musical, but for Hairspray Live! the final number will be "Come So Far (Got So Far To Go)," a song that was originally written for the film version and included as an end credits song. While this is an untraditional choice, it's impossible to shake a stick at the prospect of an Ariana Grande and Jennifer Hudson duet.

The original film is nearly 30 years old, and even then was set in the early 1960s, but much of the political and social turmoil portrayed in the film is sadly relevant in 2016. In the original 1988 film, Tracy Turnblad is arrested following a protest against segregation, which is represented in the stage musical in the number "The Big Dollhouse." This number was cut from the film, and is also not featured in the Hairspray Live! TV adaptation. There are a number of possible reasons that the song may have been cut, but it looks like Tracy's arrest won't be brought to the screen yet again.

While the differences in song and plot have altered the story of Hairspray over the years, the film's overwhelming message of acceptance and understanding for others is still alive and well in Hairspray Live! These are the major changes that we know will change the structure of the musical, there will surely be plenty of tiny differences between characters, choreography, and presentation that can only be noticed by watching Hairspray Live! when it airs on NBC on Wednesday, Dec. 7 at 8 p.m. ET.

More like this
Kimberly J. Brown & Daniel Kountz Looked Back On Their ‘Halloweentown’ Romance
By Stephanie Topacio Long
All The Sneaky Lindsay Lohan Movie Easter Eggs In Her New Ad, Explained
By Stephanie Topacio Long
You Might Want To Rewatch 'Elvis' For This Britney Spears Easter Egg
By Grace Wehniainen
'Friends' Creator Marta Kauffman Opened Up About Misgendering A Guest Character
By Grace Wehniainen
Get Even More From Bustle — Sign Up For The Newsletter