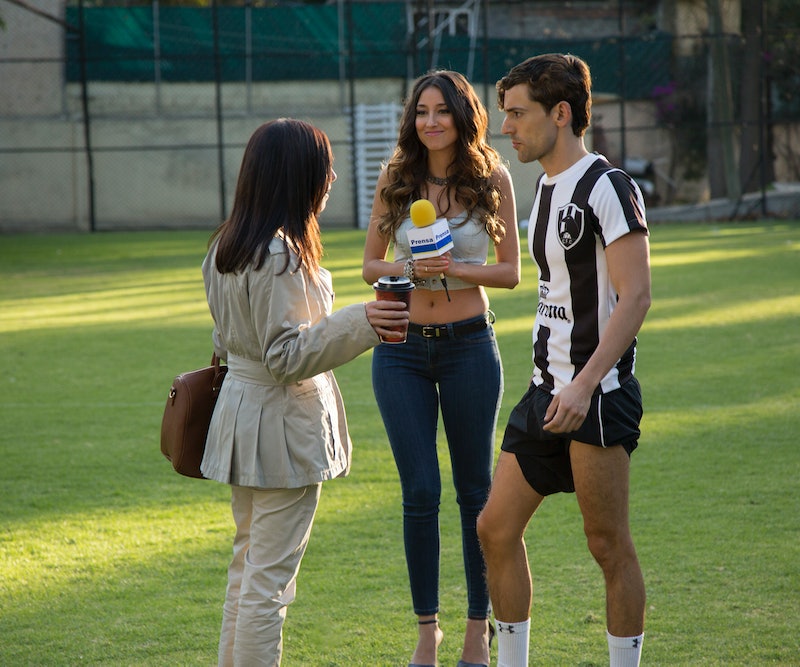 Netflix has already achieved an incredible amount of success, and now, it's taking chances on series with specific, niche audiences, like soccer comedy Club de Cuervos, which will debut its entire second season on Dec. 9. But will Club de Cuervos return for Season 3? Netflix is known for renewing its shows early and often, so I'd be willing to bet that it will be returning. It's rare that a Netflix series would get cancelled so quickly, especially if it's unique, the way Club de Cuervos is not only Netflix's first Spanish-language original series, but also a sharply written sports satire. The streaming service has been working to make sure its stable of original series are as diverse and different as they are entertaining, and so while the streaming service has yet to make an announcement about the future of Club de Cuervos, I think it's reasonable to expect a renewal.

However, I do have one word of warning — the first and second season of Club de Cuervos premiered over a year apart, even though the series was renewed soon after its August 2015 premiere (in late October). So there could be up to a year and a half between seasons, as opposed to the more typical waiting period of about a year. But there's one easy way to keep from getting impatient: marathon more TV series! These shows all share either the language, culture, or style of Club de Cuervos, and are available on Netflix to make the marathon process even easier.

This series from Spain is set in the 1950s and follows the love story between a young woman who is the heir to a department store and a long-absent friend of the family. It's soapy, and while it might not be trying for comedy, there's certainly a comedic side to the proceedings for anyone aware of telenovela (or even English soap opera) tropes.

This series from the Wachowskis and J. Michael Straczynski is set all over the world, with characters played by actors from all over the world, making it perfect for anyone who loves international, globe-spanning series, but doesn't want to read subtitles. And if you get through Season 1 quickly, you'll be caught up in time for the Christmas special premiering on Dec. 23.

If you love how well Club de Cuervos manages to lovingly mock the football industry, then Bojack Horseman is the read on Hollywood culture that you've been waiting for. It's funny and... deeply depressing, but only because that's what Hollywood is really like.

This is a remake of one of American TV's best shows, Breaking Bad. And if you're curious how this series gets translated by and for a Colombian audience, check it out the next time you want to watch a chemistry teacher transform into a drug dealer.

This new Netflix series is about kids competing in a Brazilian dystopian society for the chance to live longer. It's very Hunger Games, which should make it more than worthy of a marathon.

This satire is probably my favorite out of all those available to stream on Netflix. What makes the IFC series work so well is its goofy sense of humor mixed pointed commentary and observations, just like Club de Cuervos.

It won't be here until 2017, but Variety reported that a currently untitled Spanish series will premiere on Netflix next year, from the team behind Velvet and Gran Hotel (a sort of Spanish version of Downton Abbey). According to Variety, it will focus on four women who work as switchboard operators in 1920s Madrid. With Club de Cuervos, other original series like 3%, and this upcoming series, it's clear that Netflix is bringing its Spanish-language offerings to the next level.

More like this
Patrick Dempsey Explained Why Playing McDreamy Was Frustrating
By Grace Wehniainen
Ava DuVernay Thought The 'Queen Sugar' Series Finale Felt “Really Satisfying”
By Brad Witter
Will 'The Walking Dead' Return For Season 12?
By Grace Wehniainen
Idris Elba "Breaks Out" Of London In 'Luther' Film First Look
By Sam Ramsden
Get Even More From Bustle — Sign Up For The Newsletter