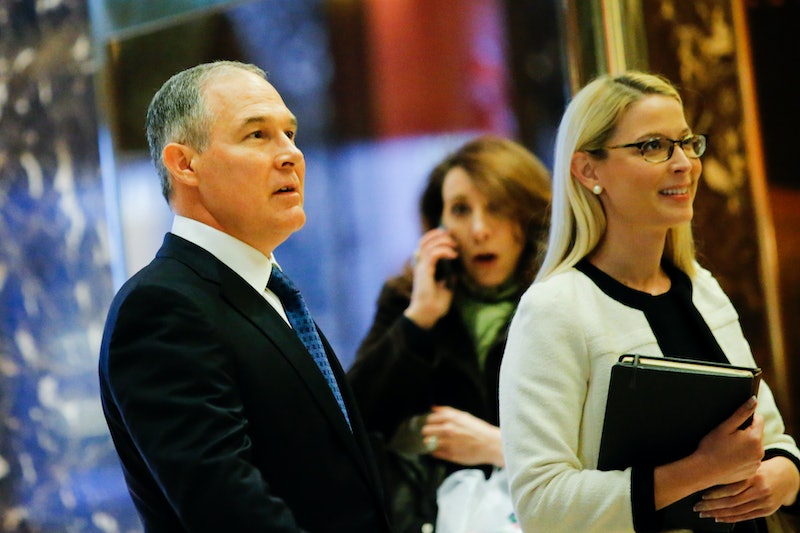 President-elect Donald Trump has announced his choice for the next administrator of the Environmental Protection Agency, and the selection has environmental and clean-energy activists on red alert. Trump plans to nominate Oklahoma Attorney General Scott Pruitt to lead the agency tasked with addressing and responding to climate change — but Pruitt has been one of the key opponents to President Obama's clean energy efforts, and has longstanding ties to the oil and gas industries, according to The New York Times.

Perhaps most astonishing about Trump's selection of Pruitt to lead the federal agency is the fact that Pruitt is currently suing the EPA in federal court. Like many of Trump's cabinet picks, Pruitt's selection may be unprecedented, but this time it's that it puts someone in charge of the same agency that he is currently challenging in court. In his capacity as Oklahoma's top law enforcement official, Pruitt has joined 28 other states asking a federal court to block climate change regulations set by Obama's EPA. The case, which challenges the constitutionality of the EPA's Clean Power Plan that regulates the carbon output of fossil fuel factories, is currently pending in federal appeals court, but is expected to reach the U.S. Supreme Court, according to The Times.

Picking Pruitt to lead the EPA is a clear indication that Trump intends to follow through on his campaign promises of dismantling existing efforts to address climate change. While Pruitt and Trump couldn't immediately roll back all existing regulations on carbon emissions and power plant outputs, The Times explains that "it would be possible for a legally experienced E.P.A. chief to substantially weaken, delay or slowly dismantle them."

As a state attorney general who — in the vein of former Texas Attorney General (now Governor) Greg Abbott — has filed dozens of lawsuits against various Obama Administration guidelines, Pruitt may very well become the "legally experienced EPA chief" who intimately understands how to pick apart regulations and, ultimately, could make good on Trump's campaign promise to do away with the federal agency entirely.

While there is no record that Pruitt shares the president-elect's belief that climate change is a "hoax" perpetuated by the Chinese, the future EPA chief did co-author a May op-ed in the conservative National Review, where he wrote that the "debate" over man-made climate change "is far from settled."

"Scientists continue to disagree about the degree and extent of global warming and its connection to the actions of mankind," Pruitt wrote in the piece co-authored with Alabama Attorney General Luther Strange. While it's technically true that there is some scientific disagreement about the extent and particular ramifications of climate change, The Weather Channel has systematically debunked the claim that climate change is not a scientific fact. It is.

Trump's decision to appoint a documented climate change skeptic and close friend to the fossil fuel industry to lead the federal agency tasked with protecting the environment from the harm caused by fossil fuel extraction is, unfortunately, consistent with the kind of appointments he's been making for his future cabinet.

Whether it's anti-public education advocate Betsy DeVos tapped to lead the Department of Education, retired neurosurgeon (who has never lived in public housing) Ben Carson as secretary of the Housing and Urban Development, or staunch Obamacare opponent Tom Price to lead the Department of Health and Human Services, Trump's cabinet seems poised to gut each of the public institutions that, ironically, benefits many in the struggling white working class that helped Trump win the election.