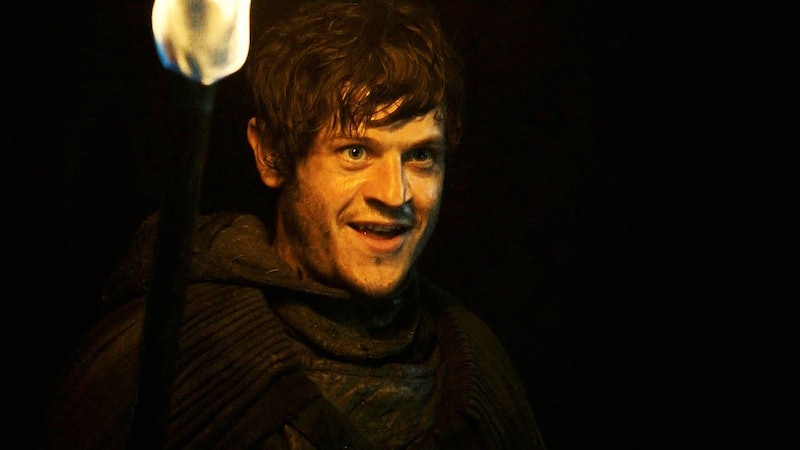 Men. What are we going to do with them? For all the inspiring, feminist characters out there in book world, there's a whole legion of gross men skulking about in the shadows. For every Hermione Granger or Lizzie Bennet, there's a Joffrey Baratheon, skinning his little brother's kittens alive. There are plenty of stand up guys in literature (well, there are a few), but there are also plenty of male characters, both heroes and villains, who embody the very worst of toxic masculinity. So here are some the most toxic male characters in all of literature.

Now, full disclosure, I liked some of these characters when I first read their books. OK, scratch that: I like some of these characters. That's partially because I'm garbage and The Phantom of the Opera imprinted heavily on the lizard part of my brain when I was twelve. But that's also because fictional characters, unlike real humans, don't have to be good people to be compelling and well written—nasty, toxic, and downright evil men have their place in fiction. Literature helps us to understand our own world, and toxic men exist. Books can often use these gross and horrible male characters to show just how toxic they are, and why their behavior is unacceptable.

But with that said... if any of these guys ever shows up on Tinder, throw away your phone and head for the hills:

Yeah, Cathy is worse. But Heathcliff is bad. Like, yes, Heathcliff, your childhood was no good, but that does not give you license to be an abusive father to Linton and all those other Next Gen Wuthering Heights kids. Heathcliff and Cathy have this whole "romance" that's pretty much just them gaslighting each other and making out. After Cathy dies, Heathcliff becomes even worse, and forces his son Linton to marry Cathy's daughter, Cathy Jr., making Heathcliff notable because he is both a terrible boyfriend and a terrible dad.

OK, let's get this sad mess out of the way: Edward Cullen is a hundred-year-old man dating a seventeen-year-old girl. It's not cute. He stalks Bella and watches her while she sleeps without her knowledge or consent. He also repeatedly ignores Bella's wishes, controls her social life in the name of "protecting" her, and physically harms Bella when they finally have vanilla sex after two books of lead up. Bella has all the personality of beige wallpaper, but she still deserves better.

Shakespeare is pretty well-versed in writing toxic dudes. King Lear is a pretty classic Bad Dad. Othello murders his wife over a misplaced handkerchief. But Hamlet is kind of... messing with Ophelia for fun. Look, sure, he has a lot going on, but he's verbally abusive to Ophelia for no dang reason, except that he's mad at his mom. Ophelia's madness isn't entirely Hamlet's fault... but he was a total asshat and then he killed her dad, so it's not not his fault.

...what was going down in the Brontë household? No, really. Charlotte and Emily, are you guys OK? Because both of you seem to think that "angry" and "alcoholic" and "borderline violent" are sexy qualities in a man. I love Mr. Rochester with all of my dorky fangirl heart, but dude locked his wife in the attic for years and never told his new girlfriend? That's not cool, man. Bertha needs a psychotherapist, not a locked attic room. Jane Eyre deserved so much better (but not St. John Rivers, stay away from me, St. John Rivers apologists).

Sure, he's evil... but he's so darn cute. Dorian is a hedonist, a narcissist, and a womanizer. He bullies his girlfriend Sibyl until she drinks acid. He bears a striking resemblance to that one guy on your Freshman hall who you had such a crush on, but who then slept with both you and your roommate and it ended poorly.

I mean... I don't know if "toxic" is really a strong enough word to apply to a serial killer. But in American Psycho, Patrick Bateman's brand of evil is very much rooted in a toxic idea of masculinity: despite being wealthy and successful, he is deeply insecure, and feels the need to rape and murder (and eat his victims) to reassert his dominance.

Ugh. Why do people hate Daisy when they could hate Tom? The Great Gatsby is stuffed full of unlikable rich people, but Tom is the most racist, mean, and misogynistic of them all. He's not even that upset when his mistress dies. Tom sucks.

Room gave me some serious nightmares. The book is told from five-year-old Jack's point of view, so we thankfully don't know too much about the character of Old Nick—but he's the one who kidnapped Jack's mother and kept her in "room" to repeatedly abuse her. It... doesn't get any more horrifying than that.

Maybe he didn't imprison his daughter in a room for years on end, but Bob Ewell from To Kill a Mockingbird is another character who falls on the "sick and horrifying" side of "toxic." He assaults his daughter, and then tries to shift the blame from himself by being racist. It's hard to be much worse than that.

Look, next to some of these monsters, Snape is a precious little puppy dog. He did everything for love, after all! And... that's what make him so very toxic. I mean, I love Snape as a character. He's a great antagonist/double agent. But the fact that he's so nasty to Harry and all the other children? Not great. Just because Lily didn't want to bone you doesn't mean it's OK to join a wizard ethnic-cleansing movement, Snape. If you liked her so much then why would you call her a mudblood? Sorry, unrequited love is not a good enough excuse for terrorizing eleven-year-olds.

This is the last one on the sick-and-twisted fathers list, I promise. Cholly had a traumatic upbringing, which translates into him being a violently abusive father. He's a complex character, but he's also an alcoholic who molests his daughter, and one of the most memorably awful men in literature.

12. The Phantom of the Opera

Oh, Phantom. Damn you for making me love you. There are many different iterations of the Phantom character, but in the original book, Erik is a train wreck of a human being. He's not as sexy as his musical counterpart and he has no nose. He's going to blow up the entire Opera house unless Christine marries him. He redeems himself in the end, when he learns the lesson that you can't threaten women into making them love you, but... really, Erik? It took you a whole book, years of extortion, and several murders to figure that one out? Stop kidnapping women, Erik. Just buy her flowers or something, dang.

Ugh. UGH. Ramasy Bolton (née Snow) is the most toxic man in A Song of Ice and Fire, and that's saying something. He's worse than Joffrey and the Mountain combined. He flays men alive, and he starved his first wife until she ate her fingers. He assaults women for fun and hunts people for sport.

And who wins the prize for most toxic male character in this or any other universe? Why, Humbert Humbert of course! He kidnaps and serially abuses twelve-year-old Lolita, and frames it as a love story. That, truly, is what makes a character toxic: not just that they're bad and no good at all, but that they use their awfulness to exert power over and abuse other characters. Especially characters they "love." So... yeah Humbert Humbert is thoroughly toxic. Now everyone go home and take a shower.

More like this
The 20 Best Audiobooks To Fall Asleep To
By Aoife Hanna and K.W. Colyard
'Games of Thrones' Fans May Recognise This 'Conversations With Friends' Location
By El Hunt
10 Must-Read New Books Out This Week
By K.W. Colyard
Conversations With Friends' Endometriosis Scenes Are As Brutal As It Gets
By Ivana Rihter
Get Even More From Bustle — Sign Up For The Newsletter