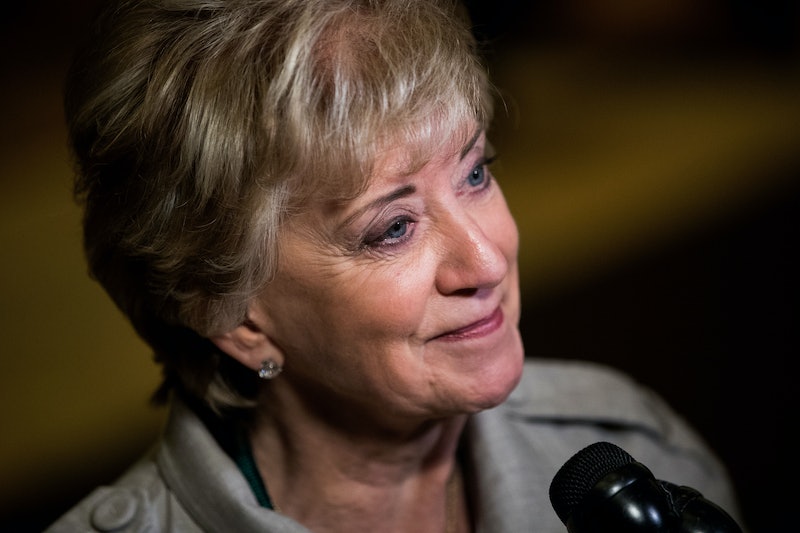 As Inauguration Day draws near, President-elect Donald Trump is filling up his future cabinet, announcing new appointments daily. And while it's no secret that Trump has a penchant for putting his pals in high-ranking positions, his pick to lead the Small Business Administration (SBA) is raising more than a few eyebrows. On Dec. 7, Trump's transition team announced that Linda McMahon, co-founder and former CEO of World Wrestling Entertainment Inc. (WWE), will head the federal agency tasked with advising and supporting America's small businesses. And since the multinational entertainment organization that McMahon and her husband, Vince, created is by no means a "small business," many observers are suggesting that McMahon's sizable contributions to Trump's campaign and charitable foundation could have influenced the President-elect's decision.

The Washington Post reported in October that McMahon gave $6 million to Trump's Super PAC, Rebuilding America Now, in August and September of 2016. That sum, made in five separate donations, made up almost a third of the Super PAC's total contributions during that quarter. The McMahons were the single largest donors to Trump's campaign and Super PAC, according to campaign finance documents reviewed by the Post. The McMahons also have a longstanding business relationship with Trump, and reportedly donated $5 million to Trump's charitable foundation between 2007 and 2009.

This won't be McMahon's first foray into public policy. She ran two unsuccessful campaigns for a Senate seat in Connecticut, and has been a vocal Republican for many years. During the presidential primary, McMahon supported former New Jersey Gov. Chris Christie's bid for the White House, and told Katie Couric in March 2016 that she found Trump's comments on women "deplorable." (Keep in mind, that denouncement was prior to the release of the Access Hollywood tapes that showed Trump bragging about being able to grope women without permission.

But $11 million dollars and a cabinet appointment later, McMahon seems to have changed her tune on Trump. If confirmed by the Republican-dominated U.S. Senate, McMahon will become Administrator of the SBA, inheriting the position from Maria Contreras-Sweet, who welcomed McMahon to the agency with a tweet on Wednesday.

Like many of the President-elect's cabinet appointments, McMahon's professional qualifications appear to be out-of-step with the duties she will assume when she is confirmed. Despite her family's entrepreneurial streak, the WWE has a near monopolization over the industry and has been accused of allegedly prioritizing money over the health of its wrestlers. "We of course had a responsibility to our shareholders,” McMahon told the Times in response, denying the allegations. “But every good chief executive understands that in addition to maintaining profitability, companies that hope to be successful in the long term absolutely have to put people first.” Whether McMahon will be able to use her experience with big business to benefit small businesses around America has yet to be seen.