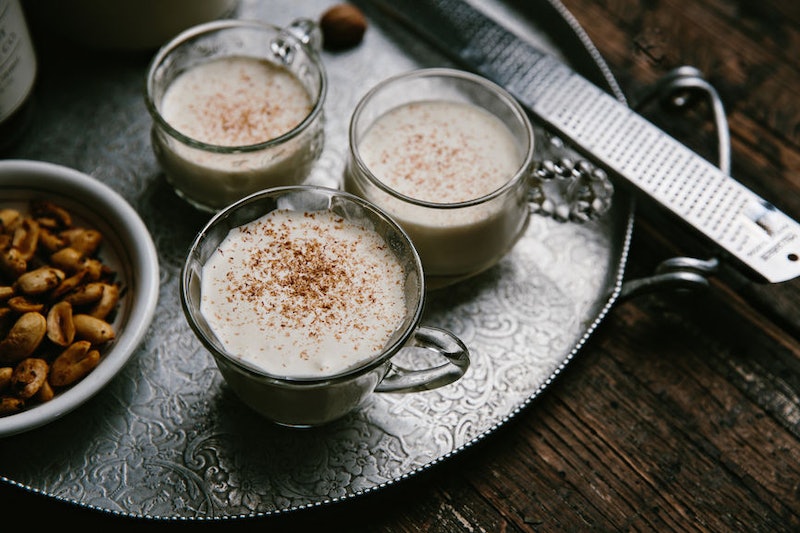 While a lot of people have heard of eggnog — the delectable, spiced holiday drink, of course — a lot of people don't actually know exactly what it is, or what eggnog even tastes like. This could be because the name of the drink is actually not as self-explanatory as it might sound. The name suggests they might taste "eggy," but in reality, its flavor profile is much more sweet than savory. In fact, a glass of eggnog tastes like the farthest thing from morning eggs or a warm dinner meal — a glass of eggnog actually literally tastes like melted ice cream in a glass that's somehow hugging your throat as you drink it. There really is no equivalent to eggnog — it's one-of-a-kind.

Eggnog is both simple and intricate at the same time. The main ingredient is milk (or cream, depending on how rich you want it to be) — though you can also substitute the milk with nut or rice milk — followed by eggs, sugar, vanilla, cinnamon, and nutmeg. The wet ingredients are blended together in a pot and brought to a boil. At that point, you can either take it off the stove and serve it warm, let it cool and serve it chilled, or add in some bourbon, whiskey or scotch and turn it into a cocktail. When you add alcohol to the mixture, the taste changes from that melted ice cream flavor to a more complex flavor that's heavy, warming and has a bit of a bite.

Whether you're planning on serving your eggnog this holiday season boozy or alcohol-free, you should consider making it from scratch. Not only is it incredibly easy to make, but you have better quality control when you make it yourself — and, more importantly, you can get to know how the drink really tastes,and how you like it by playing around with different recipes, adjusting the sugar and spice levels, and testing out different alcohol combinations. Not all alcohols mixes the same, after all: Some people prefer liquors like peppermint schnapps, while other people prefer bourbon or aged scotches. Mess around with it until you find the recipe that works for you, and then master it.

While the traditional recipe is pretty simple, there are tons of ways to modify it to your liking. As long as you've got the staples that make it a proper custard, it's going to taste like that classic Christmas-in-a-cup flavor. There's really no wrong way to mix eggnog, and so many ways to enjoy it.

And what makes eggnog so special is that it's really only around this time of year, so take advantage of the season that welcomes it most!