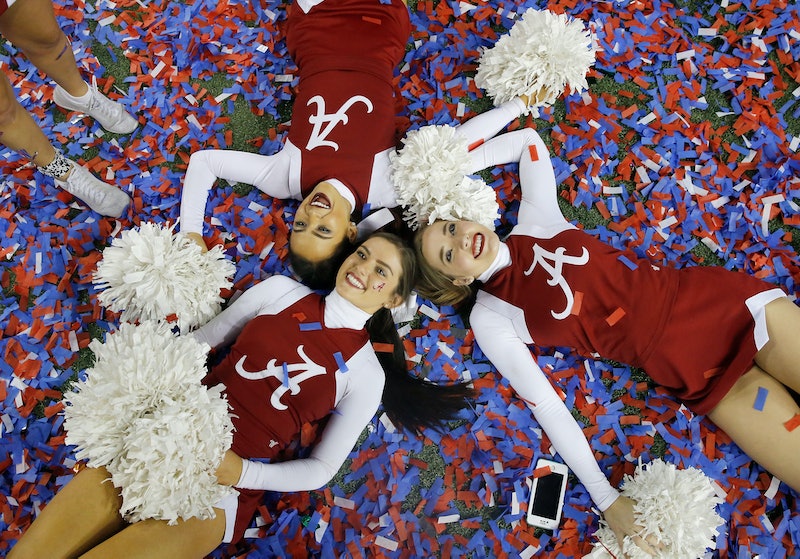 Next time someone says cheerleading isn't a sport, you can tell them the International Olympic Committee (IOC) begs to differ. According to the BBC, the IOC's executive board voted on Tuesday to recognize cheerleading as an Olympic sport, and it's about time. Something tells me the people who doubt its athleticism haven't had to toss someone around in the air like a leaf in the wind and, more importantly, catch them afterward without anyone getting kicked in the face. And what's more, the ruling has major implications for gender norms — specifically that it's a sign they're evolving in positive, much-needed ways.

Before you start cheering at the news, though, there's a catch. The IOC's recognition is provisional, so cheerleading isn't guaranteed to show up in the 2020 Olympic Games in Tokyo. Rather, the IOC voted to give cheerleading the chance to apply to be included in the Games. Here's how provisional recognition works: The sport's governing body, the International Cheer Union, will now receive $25,000 annually from the IOC and the opportunity to apply for additional grants. This money is to help them build their application to be in the Olympics. Provisional recognition lasts three years, during which time the IOC can vote to officially recognize cheerleading as an Olympic sport. After that, the International Cheer Union petitions to be included in the next Olympics.

The IOC also voted to provisionally recognize the martial art Muay Thai. According to the New York Times, recognition of both sports is part of an effort by the committee to appeal to "a new generation."

In the past, competitive cheerleading has struggled to receive the same recognition as other athletic activities. In 2010, a federal judge ruled that it wasn't an official, competitive sport under Title IX, a ruling which was upheld two years later in appeals court. One of the most commonly-cited reasons is that cheerleading has a focus on supporting other sports, so it doesn't count as one in its own right.

However, it's naive to deny the role gender plays in cheerleading's treatment. Athletic pursuits like competitive cheerleading and ballet are often denied the recognition that other sports receive, even though they're just as rigorous. Ballet is perhaps a little more complicated of an issue; some ballerinas maintain that it's an art, not a sport. But ultimately, the dismissal of sports traditionally associated with women comes down to the devaluation of femininity. Because our culture so frequently sees women as inherently weaker and more delicate than men (even though they're absolutely not), the difficulty of activities like cheerleading are downplayed. You can also see this play out in the treatment of male cheerleaders, who are often mocked for being interested in a "feminine" sport. The underlying assumption is that it must not be hard if a girl can do it, right?

Like many gender norms, though, this attitude is beginning to change. In 2014, the American Medical Association recommended it be considered a sport due to its rigor and risks. According to the Washington Post, doctors pointed out that cheerleading is the leading cause of catastrophic injury in female athletes, and recognizing it as a sport would require better safety measures to protect athletes. "These girls are flipping 10, 20 feet in the air. We need to... demand they get the same protection as their football colleagues," said Dr. Samantha Rosman, according to the Washington Post.

Now that cheerleading has a chance to become an Olympic sport, millions of people will have the chance to see how physically demanding it is. Besides, who doesn't love watching people do ridiculous stunts like this?

That deserves all the applause in the world.

More like this
25 Quotes About Love To Share During Pride Month 2022
By Madeleine Aggeler and Emma Garza
Chelsea Woody On Shattering Stereotypes In Surfing
By Leah Groth
9 Low-Impact Workout Ideas, From Yoga To Rowing
By Carolyn Steber
An Honest Review Of Kane's Revive Post-Workout Recovery Shoes
By Carolyn Steber
Get Even More From Bustle — Sign Up For The Newsletter