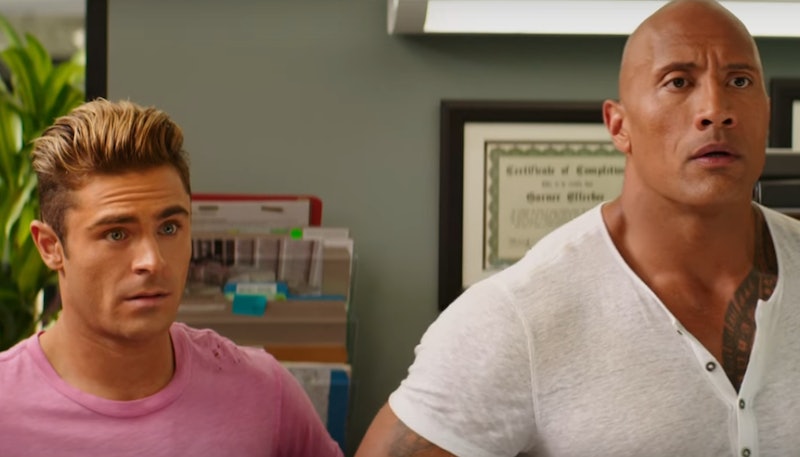 We're currently in what feels like the peak era of three pop cultural phenomenons. I'm talking Dwayne Johnson, Zac Efron, and cinematic reboots of old TV shows. So, for all three of these powers to combine in the creation of the Baywatch reboot movie has been making my heart gallop in sweet anticipation of the end result for some time now. On Thursday, the first official trailer for Baywatch was shared exclusively by the Today show, and it's so full of throwback goodness and the joys of Efron and Johnson that I'm about fit to squeal. Though I'm highly appreciative of every dynamite, shirtless shot of the movie's two leads that we're treated to, I'm specifically loving all of the meta jokes from the Baywatch movie trailer.

Those of us who grew up watching the TV series will no doubt remember it for its basest qualities. Though specifically about a group of lifeguards rescuing an entire beach-loving populace from dangers such as sharks, drowning, and even serial killers, Baywatch was mostly known for its never ending line-up of outrageously beautiful women (such as Pamela Anderson and Carmen Electra) in tiny red bathing suits.

With that in mind, the first official Baywatch trailer is full of jokes that recognize and pay hilarious tribute to these qualities. Watch the trailer below, and then join me in enjoying all the meta jokes that it offers:

Back in the original series of Baywatch, saving lives went pretty much hand in hand with scoring dates. Within just a few seconds of the new Baywatch trailer, we see that premise definitely hasn't changed when Johnson's character, Mitch Buchannon, gets hit on as he saves a beautiful woman from a burning boat. So '90s. And also, can anyone really blame her?

2. "It's Up To Us To Restore The Baywatch Brand"

This one is so meta in hurts. In realizing that they have to fight to keep Baywatch Headquarters funded properly and fully functional, Captain Thorpe (Rob Huebel) tells Mitch that they need to do something to boost their PR. Like hire double gold medal winner, Matt Brody (Zac Efron). Sure, it works in terms of the plot line, but we all know that this a big old nod to the fact that the movie is also aiming to restore the Baywatch brand IRL.

Listen, there's no delicate way to put this, but the prominent boobs of the majority of the female cast of Baywatch were a big part of what made the original TV show such a roaring success. Thankfully, times have moved on and matured a little since then. As shown by the trailer, Summer Quinn (Alexandra Daddario) is not happy to be there just to be objectified. After she catches Matt staring at her chest, she reminds him, "you should look at my face."

4. "Why Does She Always Look Like She's Running In Slow-Mo?"

Speaking of which, the notorious slow-motion shots of the original series also get a major shout-out. Summer, completely frozen in awe, questions why it seems like that particular life guard seems to run so slowly and majestically. Her friend beside her asks, "you see it too?"

And, finally, we have a fantastic callback to the manner with which many of the Baywatch lifeguards would act well beyond their jurisdiction in the show, involving themselves in scenarios and crimes that it most definitely wasn't their place to be involved in. As Matt calls it, that's being in "lifeguard pursuit," and it's totally legit. Except it's totally not a thing, as the sensible police officer is forced to inform him.

With these five throwbacks to the original show bringing all of the funnies already, I'm eagerly expecting even more within the actual movie itself. I'll definitely be looking out for more of them when Baywatch finally comes to theaters on May 19, 2017.