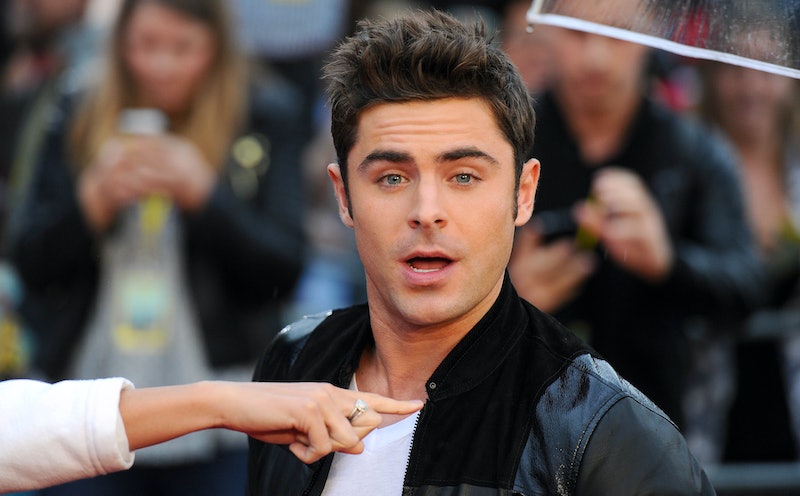 OK, before we even dive in, I am going to pump the brakes for a sec and recommend that you go put on your sunglasses. Double check that the lenses will protect your eyeballs from both UVA and UVB rays. Oh, and you will probably want to apply some sunblock, too. OK, are you prepared to continue? Here we go: Some behind-the-scenes Baywatch reboot pictures have cannonballed into the Internet seas, and looking at this series of piping hot images is almost like staring directly at the sun. Filming on the silver screen adaptation of the iconic television series—which is slated to hit theaters in 2017—commenced on Monday, and the documentation of day one does not disappoint. What might these photos be of, you ask? Oh, just Zac Efron and Dwayne “The Rock” Johnson in board shorts and rash guards.

Yep. Yep. Said photos are a gift, and I will cherish them wisely.

So, how'd day one go? According to The Rock, Baywatch 2k17 is off to a great start. "My character 'Mitch Buchannon' just gave @zacefron's character 'Matt Brody' the all important beach speech about what it means to have manly 'Alpha balls,'" the WWE legend wrote on Instagram. "Zac's ad-libbed responses were brilliant! Talented and great dude. World get ready to have some fun, 'cause the beach will never be the same again."

Ugh, this movie had me at "The Rock and Zefron," but "Alpha balls" really takes things to the next level.

What's that? The pic magic has only just begun?

I am not mad at these photes. Not mad at all.

More like this
Watch Zac Efron Just Learn What “Zaddy” Means
By Hugh McIntyre
Laura Dern Said “Cultural Awareness” Made Her Rethink This 'Jurassic Park' Fact
By Grace Wehniainen
'Stranger Things' Star Joe Keery Is Dating An "Indie Scream Queen"
By S. Atkinson and Grace Wehniainen
Amanda Seyfried Reflects On 'Mean Girls' & "Gross" Remarks That Men Made After It
By Jake Viswanath
Get Even More From Bustle — Sign Up For The Newsletter