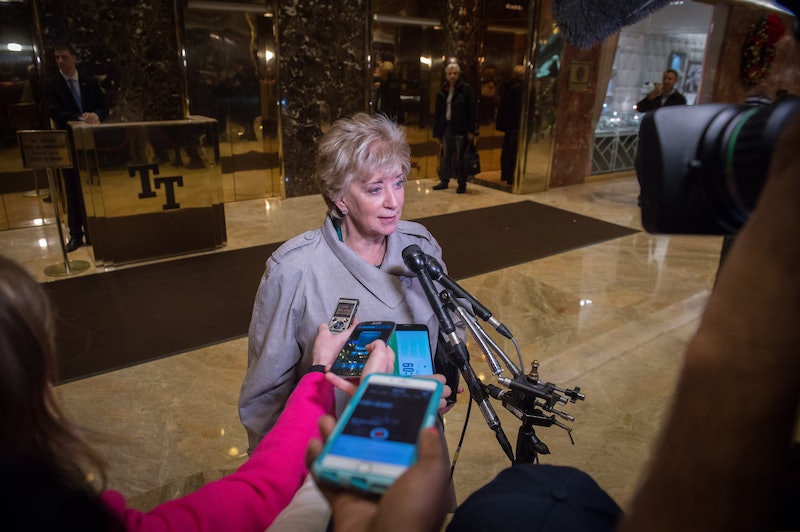 During her presidential campaign, Hillary Clinton (rightfully, I believe) got in hot water for a story reported by ABC News about a major donor to the Clinton Foundation, Rajiv K. Fernando, who got a position in the State Department. ABC News detailed in the June 2016 report how it had been trying to track how Fernando, who had "no obvious experience" in State Department work, was appointed to the International Security Advisory Board (ISAB). At the time, Clinton's traveling press secretary, Nick Merrill, said, "This was an unpaid, volunteer advisory board, and one of several foreign policy-focused organizations that he was involved with. As the State Department itself has said, the ISAB charter calls for a diverse set of experiences for its members. That's all there is to it." Still, the story added evidence to a narrative that dogged Clinton throughout the campaign — that she was beholden to large campaign donors, and her administration's integrity would be compromised.

Throughout his campaign for president, Donald Trump's supposed independence from the special interests which he claimed corrupted traditional politicians defined the argument for his candidacy. Though he eventually backed off it (and arguably never followed it closely in the first place), Trump alleged during the primary campaign that he was self-funding his campaign and therefore couldn't be bought like other candidates. He said during a Republican debate in February, after being booed:

However, now that he's won, Trump is appointing people who gave him money to his administration. Perhaps the clearest example is Linda McMahon, whom Trump appointed Wednesday to head the Small Business Administration. McMahon, along with her husband Vince, is a co-founder of World Wrestling Entertainment (WWE), and gave $6 million to Rebuilding America Now, a Super PAC that supported Trump. The couple were together the 20th-largest donors to the 2016 election, according to the Center for Responsive Politics, giving a total of $9,797,184 exclusively to Republicans or related groups. They were also the largest donors to the Trump Foundation (far more than Trump himself).

McMahon is not alone. According to to the Center for Responsive Politics, Steve Mnuchin, the former Goldman Sachs executive set to become Trump's treasury secretary, donated the maximum amount of $5,400 to Trump's campaign, as well as over $400,000 to the Republican National Committee and Republican state parties. He served as National Finance Chair for the Trump campaign, responsible for raising money for the candidate through his financial connections. In a Bloomberg profile shortly after he joined the campaign, Mnuchin said: "Nobody’s going to be like, ‘Well, why did he do this?’ if I end up in the administration.”

Betsy Devos, Trump's pick for Education Secretary, is a billionaire whose family has given over $20 million to Republicans since 1989, including over $10 million this year, according to the Center for Responsive Politics. Though none of Devos' own giving went directly to Trump, her brother, Erik Prince gave $150,000 to the Make America Number 1 Super Pac supporting Trump. The billionaire investor Wilbur Ross, Trump's Commerce Secretary, gave the maximum $5,400 to Trump directly, as well as over $700,000 to the RNC and state parties. Andrew Puzder, the Carl's Jr. and Hardee's executive who was named Thursday as Trump's Secretary of Labor, gave the maximum $5,400 to Trump, as did his wife, according to the Center for Responsive Politics.

Unsurprisingly, watching Trump, the man who touted himself as above money's influences, appoint big donors to top positions is earning criticism from some of Clinton's former staff, like Jesse Ferguson, who was her deputy national press secretary.

Trump's appointments certainly have their own qualifications and reasons for nomination. But that shouldn't negate scrutiny of their donations. Trump claimed he'd be free of corrupting influence because he was self-funding his campaign, and he argued Clinton would be bought by donors. We should be at least as tough on him as we were on her.