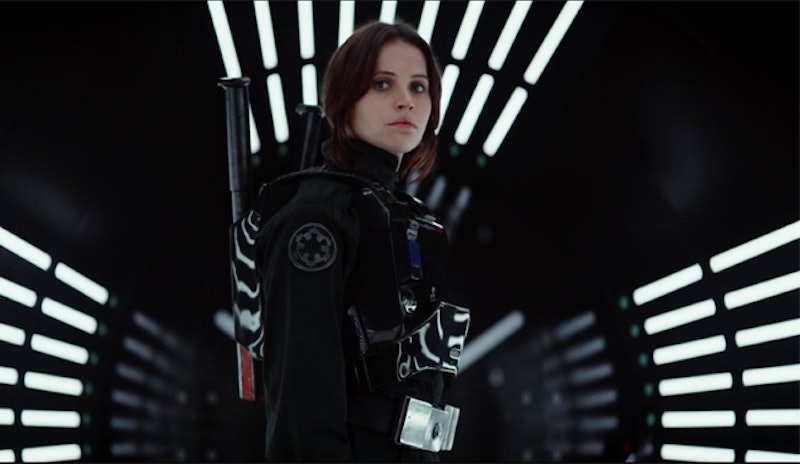 It seems like just yesterday that LucasFilms started teasing us about the potential for the first Star Wars Anthology film, set in the Star Wars Universe but existing as a standalone movie. Rogue One's release is now only days away, and understandably, the director of the film, Gareth Edwards, has been trying to keep secret as many of the movie's details and surprises as possible, which means it's up to fans to deduce plot points and character cameos from trailers, posters, and the occasional scrap of info slipped into an interview. One of the biggest questions fans have, of course, is: will Leia be in Rogue One? After all, the character is an icon in the Star Wars universe.

Edwards is way too tight-lipped to give any direct confirmation, but a recent interview suggest that moviegoers should keep an eye out for the iconic princess-turned-general. As many outlets, including SlashFilm, have reported, Edwards was recently on a French news program where he was asked to reveal whether certain characters were in the new Rogue One. Now, he didn't abandon his ethics and start blabbing spoilers to the crowd, but he did offer a hint by way of avoidance. When he was asked if Luke Skywalker is in Rogue One, he said, "No." And when he asked if there will be Jedi in the film, he gives a response of "technically, yes."

However, when Edwards was prompted about whether Leia will be in Rogue One, he suddenly hesitated and switched to a much more noncommittal — and much more enticing — answer: "I don’t want to ruin it for people." That has to mean yes, right? If he was willing to confirm that Luke won't be in the film, and he was willing to acknowledge some presence of Jedi, then Edwards' non-answer about Leia has me thinking she's surely going to show up.

It would make sense to see Leia in Rogue One. After all, as Inverse pointed out, both her biological father, Anakin aka Darth Vader, and her adoptive father, Bail Organa, are going to be in the film, so it's reasonable to expect that Leia will show up as well. Plus, she has the the Death Star plans with her at the beginning of A New Hope, and an onscreen confirmation of how she got them would make sense in the new film.

Now, no one will know for sure until they're in the theaters, but I think Edwards' little reveal in that interview has given folks reason to hope that Leia will make an appearance in Rogue One.