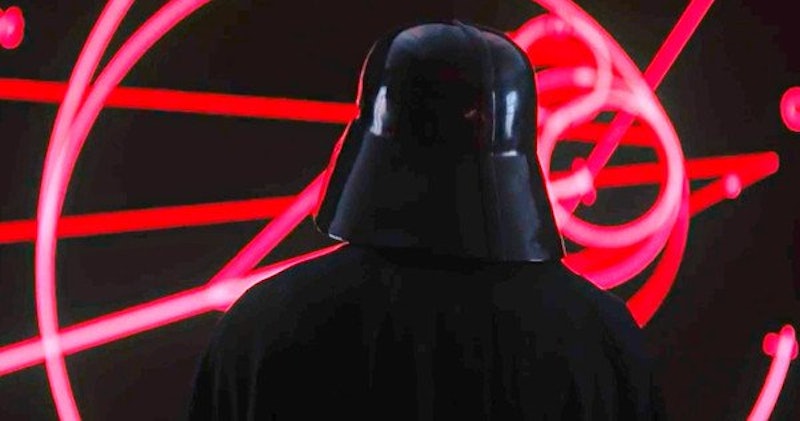 There are only three weeks standing between audiences and Rogue One: A Star Wars Story, but lucky for us, the latest Rogue One TV spots are still leaving, well, pretty much everything unanswered. (Read: They're still building hype.) Speaking of hype, take a look at Darth Vader, everyone. He makes another debut in the latest promo, breathing heavily against a backdrop of what appears to be his scary space station. At this point, it's still not clear how big of a role Darth will have in Rogue One, but he sure is getting an awful lot of trailer screen time for a guy who isn't the main villain of this story.

Rogue One: A Star Wars Story follows what happens after Revenge of the Sith and before Star Wars: A New Hope. A group of rebels (plus a droid, but more on that in a moment) steal plans for the Death Star. The rogue group is helmed by the main protagonist and most rebellious of the rebels, Jyn Erso (Felicity Jones). All of this rebellion seems to irk one man in particular — head of the Advanced Weapons Research for the Imperial military, Orson Krennic (Ben Mendelsohn), a man who's unhealthily preoccupied with the completion of the Death Star project. Though Orson makes an appearance in this spot, it's Darth Vader's under-the-mask respirations that will send chills down your spine. (Starting at the 0:37 mark.)

Taking Orson aside for a moment (because it's already been made clear that he will be Rogue One's main villain), how much story will Darth Vader be afforded? There are no details on how Darth Vader fits into Rogue One, but the Death Star plans are important to his general cause, so surely, he'll be involved in that capacity. At the very least, he'll be the puppeteer, pulling the strings to Orson's rebel-stopping plans. (Though, please note, Darth and Orson are not villainous comrades.)

But, it's not all stressful news and Darth Vader threats for the rebels. We also get a glimpse of K-2SO, who we can now ascertain from this trailer, will appear as comic relief even in the darkest of Rogue One's moments. "I'll be there for you" the droid tells Jyn, before matter-of-factly adding, "The captain said I had to." Droids: the ever-dependent truth tellers.

Even if his moment on screen only lasts about as long as the troubling romantic connection between the Skywalker siblings, the fact that Darth Vader will be present at all is uplifting. If everything goes rogue in Rogue One, at least we can count on Darth Vader to make us feel right at home in a galaxy far, far away.