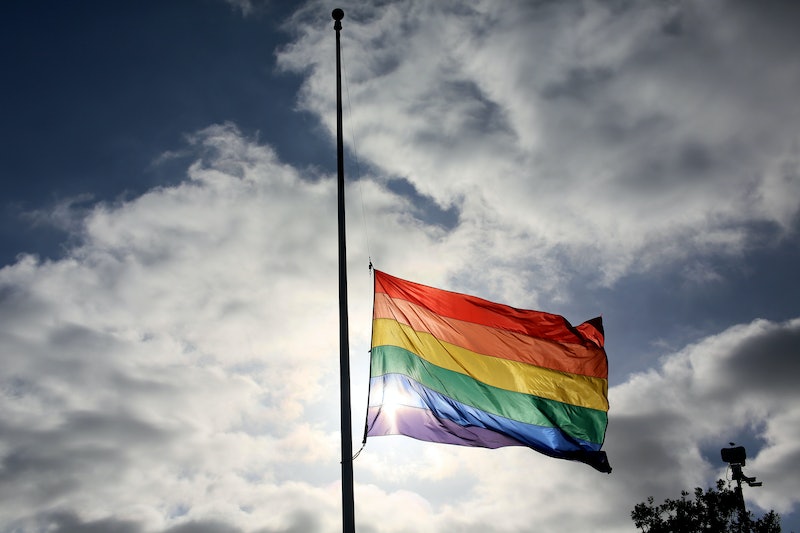 The holidays are the most wonderful time of the year in many ways, and chief among them is the spirit of giving. (A close runner-up: Seasonal movie marathons.) And considering how difficult this year has been for the LGBTQ community, donating to LGBTQ organizations is an excellent way to spread the holiday spirit.

In case you missed it, 2016 has been tough for women, people of color, LGBTQ people, and basically anyone who isn't a straight, white, cisgender man in America. Even before Donald Trump and his firmly anti-LGBTQ running mate, Mike Pence, won the presidential election, the Human Rights Campaign predicted that there would be backlash against the rights LGBTQ people won last year — and they were sadly proven correct. Some states considered enacting legislation restricting transgender access to sex-segregated facilities, and North Carolina actually passed one such "bathroom bill." In March, the Mississippi Senate passed a similar bill allowing businesses and public employees to deny services to LGBTQ individuals. The law was later blocked by a federal judge, but it gives you an idea of the legislative climate this year.

The most tragic event, of course, was the mass shooting at an LGBTQ nightclub in Orlando, Florida. The attack killed 49 and left dozens of others wounded, making it the deadliest mass shooting in American history.

These are just some of the obstacles the LGBTQ community has faced in 2016, and it can use all the support it can get. So while you're out shopping for your friends and family this year, consider adding the following organizations to your list.

As 2016 has shown, legislation is one of the most important battle fronts in the fight for LGBTQ equality. The Transgender Law Center's mission is to change "law, policy, and attitudes so that all people can live safely, authentically, and free from discrimination regardless of their gender identity or expression." It has a variety of programs, including a project dedicated to protecting the rights of transgender prisoners and a legal information helpline.

Allies are an important part of LGBTQ rights, and with more than 400 chapters nationwide, PFLAG is one of the best-known organizations uniting LGBTQ people and their supporters. (The name stands for Parents, Families, and Friends of Lesbians and Gays.) Accordingly, its work focuses on education and advocacy, including a program working with schools.

The American Civil Liberties Union brought its first LGBTQ case in 1936, and it founded the LGBT Project several decades later, in 1986. Its mission is fairly self-explanatory; the LGBT Project defends LGBT rights on fronts like nondiscrimination protections and criminal justice reform.

Donate to the ACLU here. If you've experienced LGBTQ or HIV discrimination, you can report it to the organization here.

Although the National Runaway Safeline (NRS) doesn't focus on LGBTQ runaways alone, a disproportionately high number of homeless youth are LGBTQ. According to the Williams Institute, as many as 40 percent of those served by homelessness agencies were LGBTQ youth. According to its website, the NRS "provides education and solution-focused interventions, offers non-sectarian, non-judgmental support, respects confidentiality, collaborates with volunteers, and responds to at-risk youth and their families."

Donate to the NRS here.

Founded in 1994, CenterLink supports the development of LGBTQ community centers across the country. Programs include a leadership summit, capacity building and technical assistance, and bi-monthly newsletters.

The Gay, Lesbian, and Straight Educators Network (GLSEN) has been around since 1990. True to its name, the organization unites parents, educators, and students working to end LGBTQ discrimination. Resources include a "safe space kit" for teachers and a page dedicated to helping students register a Gay-Straight Alliance at their school.

Immigration Equality, which calls itself the nation's foremost LGBTQ immigration rights organization, provides legal representation and advice to LGBTQ and HIV-positive people seeking to immigrate to the U.S. As the organization points out on its website, this is especially important work considering "there are nearly 80 countries around the world where it is a crime to be LGBTQ, with consequences up to and including the death penalty."

Better known by its acronym OYA, the Orlando Youth Alliance works to provide a place for LGBTQ youth to "gather, talk about issues and concerns that are important in their lives, [and] meet other gay youth." It's a peer-based organization, so while there are adults leading OYA, the focus is on the population it serves. As you may recall, the Pulse nightclub shooting occurred in Orlando, so you may want to consider supporting LGBTQ organizations in the area.

One of the most well-known LGBTQ organizations out there, the Trevor Project provides crisis intervention and suicide prevention services, including a 24-hour hotline. According to its website, the Trevor Project's mission is to "end suicide among gay, lesbian, bisexual, transgender and questioning young people," who tend to have higher rates of suicide than the general population.

You can donate to the project here.

After the ongoing legal battles over LGBTQ rights in North Carolina this year, it's safe to say the state's LGBTQ population could use support. Equality North Carolina's mission is to fight for "equal rights and justice for lesbian, gay, bisexual, transgender, and queer (LGBTQ) North Carolinians" by lobbying and serving as a resource for LGBTQ news.

The Los Angeles LGBT Center obviously serves Los Angeles, but it's one of the most extensive LGBT rights organizations in the nation. (It receives a four-star rating from Charity Navigator, which is ridiculously high.) Programs include legal services, affordable housing for LGBTQ seniors, and a range of medical services.