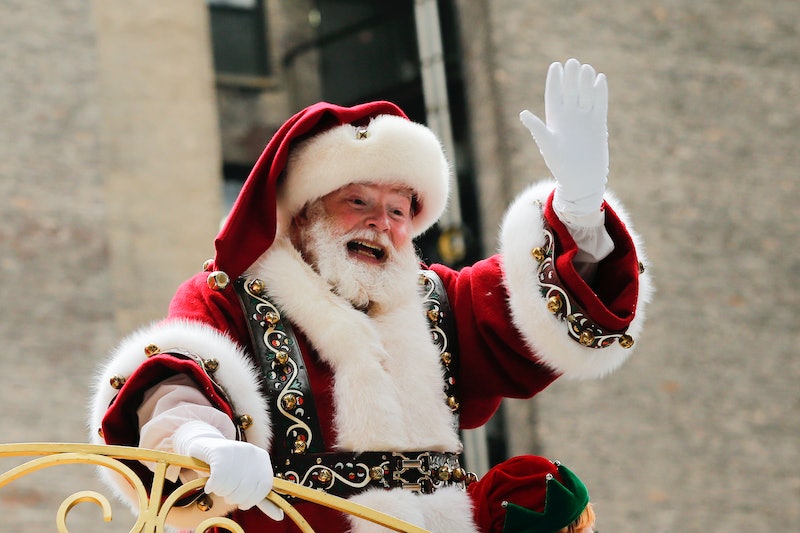 Small children who steadfastly believe in Santa Claus are just about the cutest thing ever, but, as kids get older, they’re going to discover the ruse one way or another. A Canadian mom recently posted a brilliant idea of how to tell kids the truth about Santa Claus on Facebook. By having older children “become” Santas themselves, adults can tell them the truth without crushing their little spirits or making them feel like they’ve lost something. Even better, this method teaches older kids about selfless giving. UPDATE: Although Charity Hutchinson didn’t know who wrote the original post when she put it up on Facebook, the writer’s identify has since been found. Leslie Rush tells Bustle that she originally wrote the story for a 2006 About.com forum, and reposted it in a Sjogrens Syndrome support forum two years later. Rush’s own sons are now adults, and she says they’ll be telling her grandson about “becoming a Santa” this year. Of her post's sudden fame, she tells Bustle, “I am thrilled so many people are taking it to heart!”

Charity Hutchinson, of Kelowna, British Columbia, found this story on a friend’s Facebook feed. "After wiping away ugly mom tears while reading it I knew a lot of my friends would love the idea too so I decided to share it as well," she tells Bustle. Hutchinson, who has two sons and two nephews at home, was impressed by the writer’s method, writing in her post, “This is by far the best idea I've seen about telling your kids about Santa.” The origins of the story are unknown; the Huffington Post has tracked it to forums going back as far back as 2007.

In our family, we have a special way of transitioning the kids from receiving from Santa, to becoming a Santa. This way, the Santa construct is not a lie that gets discovered, but an unfolding series of good deeds and Christmas spirit.

When they are 6 or 7, whenever you see that dawning suspicion that Santa may not be a material being, that means the child is ready.

I take them out "for coffee" at the local wherever. We get a booth, order our drinks, and the following pronouncement is made:

“You sure have grown an awful lot this year. Not only are you taller, but I can see that your heart has grown, too. [Point out 2-3 examples of empathetic behavior, consideration of people's feelings, good deeds etc, the kid has done in the past year]. In fact, your heart has grown so much that I think you are ready to become a Santa Claus.

You probably have noticed that most of the Santas you see are people dressed up like him. Some of your friends might have even told you that there is no Santa. A lot of children think that, because they aren't ready to BE a Santa yet, but YOU ARE.

We then have the child choose someone they know--a neighbor, usually. The child's mission is to secretly, deviously, find out something that the person needs, and then provide it, wrap it, deliver it — and never reveal to the target where it came from. Being a Santa isn't about getting credit, you see. It's unselfish giving.

The writer goes on to share how her own kids became “Santas.”

My oldest chose the “witch lady” on the corner. She really was horrible--had a fence around the house and would never let the kids go in and get a stray ball or Frisbee. She'd yell at them to play quieter, etc — a real pill. He noticed when we drove to school that she came out every morning to get her paper in bare feet, so he decided she needed slippers. So then he had to go spy and decide how big her feet were. He hid in the bushes one Saturday, and decided she was a medium. We went to Kmart and bought warm slippers. He wrapped them up, and tagged it "merry Christmas from Santa." After dinner one evening, he slipped down to her house, and slid the package under her driveway gate. The next morning, we watched her waddle out to get the paper, pick up the present, and go inside. My son was all excited, and couldn't wait to see what would happen next. The next morning, as we drove off, there she was, out getting her paper--wearing the slippers. He was ecstatic. I had to remind him that NO ONE could ever know what he did, or he wouldn't be a Santa.

Over the years, he chose a good number of targets, always coming up with a unique present just for them. One year, he polished up his bike, put a new seat on it, and gave it to one of our friend's daughters. These people were and are very poor. We did ask the dad if it was ok. The look on her face, when she saw the bike on the patio with a big bow on it, was almost as good as the look on my son's face.

This is all of us:

Hutchinson’s post has resonated with readers, who have shared the story more than 7,500 times. "I think it's struck a chord with so many parents because it keeps the magic of Christmas alive for your kids and teaches them some incredible life lessons about giving and helping others," she tells Bustle. "It's really so much more than just not easing the blow when having to tell the truth about Santa. It helps parents to inspire their kids to be gracious givers and the joy that comes when you do something nice for someone else."

Although Hutchinson's sons are too young to learn the truth about Santa, she has gotten to try out this method with one of her older nephews. "Coincidentally he had come to me just a couple of days before telling me that he knew that Santa wasn't real and neither was the Tooth Fairy or the Easter Bunny," she explains. She talked to him about becoming a Santa and discussed most of the things that the original writer suggested. "Instantly a huge smile lit up his face and his eyes bugged open," Hutchinson recalls. "You could tell how thrilled he was that HE was going to be SANTA. He started asking me a million questions about how long I had been a Santa for and if he would go down a chimney too. He's seriously been the happiest kid this week telling me about his plans." SO SWEET.