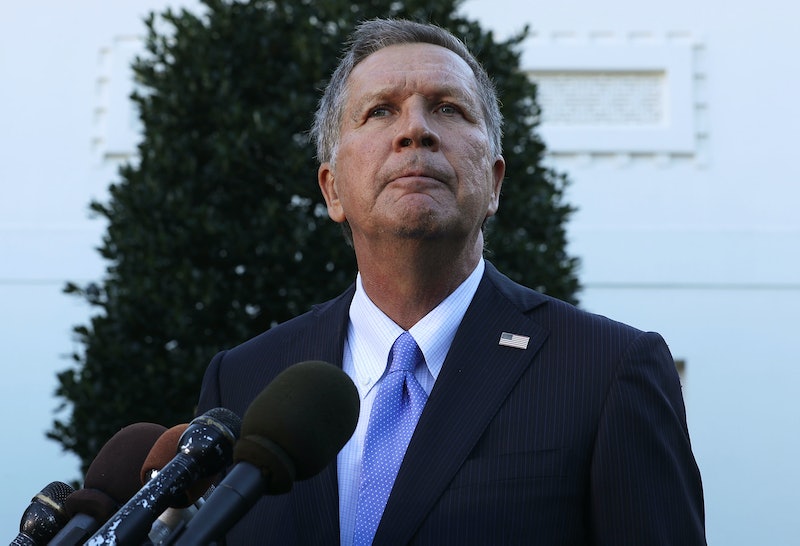 An Ohio bill banning abortions after six weeks is on its way to John Kasich's desk. There, the professed anti-abortion governor will decide whether or not to sign it into law. And if he does, the bill could spell trouble for the state's few abortion clinics in operation. Ohio currently has seven surgical abortion clinics statewide, according to The Columbus Dispatch. And according to The Dispatch's Alan Johnson, one of only two in Central Ohio was already at risk of closing in November.

Just two years ago, the Guttmacher Institute, a reproductive health research and policy organization, reported that in 2011, when the state had 18 clinics, 91 percent of Ohio counties still lacked their own, meaning that already-outrageous number is even higher now.

Kasich's signing the "heartbeat bill" into law could snuff out the already struggling few abortion clinics in the state. Besides restrictions on patients seeking abortions, clinics themselves must contend with a number of complicated regulations that have made many of them ultimately unable to operate. Closing clinics is the ultimate end goal of anti-abortion advocates, and this latest restriction will certainly make keeping clinics open even harder. But will the bill be enough to close the few remaining clinics completely?

Yes and no. Clinics like those of Planned Parenthood, which currently offer a number of health services that include but are by no means limited to surgical abortions, are safer. The two PP clinics in Ohio that offer abortion amongst other services may stand a chance to survive.

At least one abortion provider in the state has made a public statement about what the "heartbeat bill" will mean for them. Cleveland-based nonprofit clinic Preterm released a statement on their website yesterday, urging people to take action and reassuring their community that their work will endure. Other clinics have not been as vocal about their outlooks for the future.

The future of reproductive rights in Ohio have been dealt a serious blow by the passage of the "heartbeat bill" and public health in the state depends on what Kasich decides to do next. Either way, Ohio's open and operating abortion clinics need to not only survive, but they must become more numerous, something that seems to be slipping more and more out of reach.

Whatever happens in Ohio, lawmakers, advocates, and activists across the nation will be watching, waiting to see what the repercussions will be in their own states.

More like this
How To Fight For Reproductive Rights, Based On How Much Time You Have
By Courtney Young
Harry Styles Called For "Backlash" In Powerful Statement On Abortion Rights
By El Hunt
LGBT+ Men Fleeing Afghanistan Were Denied Asylum By The Home Office, New Findings Show
By Sam Ramsden
10 Times Boris Johnson Got It Wrong On Trans Rights
By El Hunt and Sam Ramsden
Get Even More From Bustle — Sign Up For The Newsletter