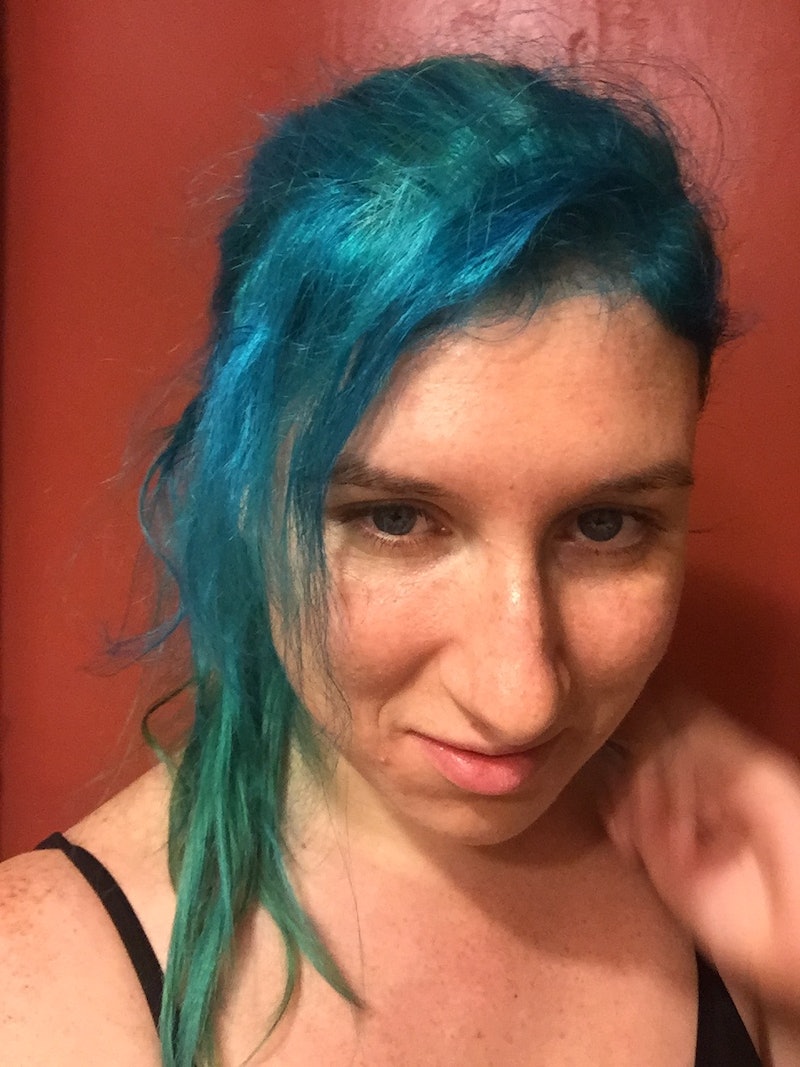 I went eight years believing my body was somehow just not able to orgasm in the presence of another person. Then, one Saturday afternoon, a guy I was newly dating was fingering me, and I felt one coming on. I refrained from saying anything because I feared I might lose it. But I didn't! Then, after a short rest, the same thing happened again. Then, we took a nap, and after we woke up, he made me come a third time. It's true what they say: when it rains, it pours. And that's a wonderful thing when it's raining orgasms. Turns out my body was working peachy keen all along!

But that didn't just happen overnight. Here are some things I did to go from unable to orgasm with a partner to orgasming almost every time.

A lot of the advice I read online on this topic was far from encouraging. Vaginas were depicted as complicated. Analogies comparing men to microwaves and women to ovens got tossed around a lot — hence my belief that my body was the problem. But if you can orgasm alone, it's probably not your body. You probably are fully capable of doing so with a partner. So let go of that voice in your head that says (if you're anything like I was) "should I fake it?" or "how can I take the attention off me?" You've got this!

2. Give Yourself The Chance

Don't automatically jump to plan B (which, for me, was faking it or reverting the attention back to my partner). Believe you're worth the time to accomplish plan A. Sex therapist Vanessa Marin's class Finishing School, which teaches women how to overcome blocks to orgasm, recommends allowing yourself at least 20 minutes. I realized I'd been brainstorming how to make my lack of orgasm less awkward before I even waited to see if one would show up. Just entertain the possibility that this sexual encounter will be different from your past ones. And remember that your partner enjoys pleasing you, so the more time they can spend on it, the better!

3. Make It Your Goal

I know this goes against a lot of common advice, and it's true that obsessing over whether or not you'll orgasm can kill your chances. But when I was thinking "forget about the outcome" or "just enjoy the sensations," I wasn't really giving my body what it needed to finish or sticking around long enough to make it happen. So, try making it your mission. Tell yourself, "I will not stop until I come." After all, what had really hurt my shots wasn't thinking about orgasming but thinking about not orgasming. Thinking about it — how good it'll feel and how badly you want it — can even help turn you on and get you closer.

But here's where forgetting about the outcome comes in. Instead of thinking about how you'll feel a few minutes from now, focus on the sensations you're experiencing right now. A weird mental exercise I like to do is to tell myself that I am actually orgasming already. Instead of just thinking of climax as that one split second, I imagine it as that whole period of time when my excitement is high and it feels really good. This makes me more aware of the sensations I'm feeling, which in turn makes them more intense and leads to quicker and better orgasms. Another trick I use to bring my mind to my sensations is to ask myself really specific questions about the stimulation. Is it more on the left side of my clit, or the right? It sounds silly, but drawing your attention to the feeling makes it much more pleasurable.

One note: While it may seem like holding your breath or tensing up helps, that's what I did at first, and it felt like trying to jump up onto a ledge and missing it several times before I got over, rather than just taking the stairs and getting there more quickly and less frantically in the end.

If you're not at that point yet, don't be afraid to spread your legs, lie on your stomach, fantasize, groan, be quiet, or whatever you need. Your need for it may be temporary, and trust me — it'll be worth it.