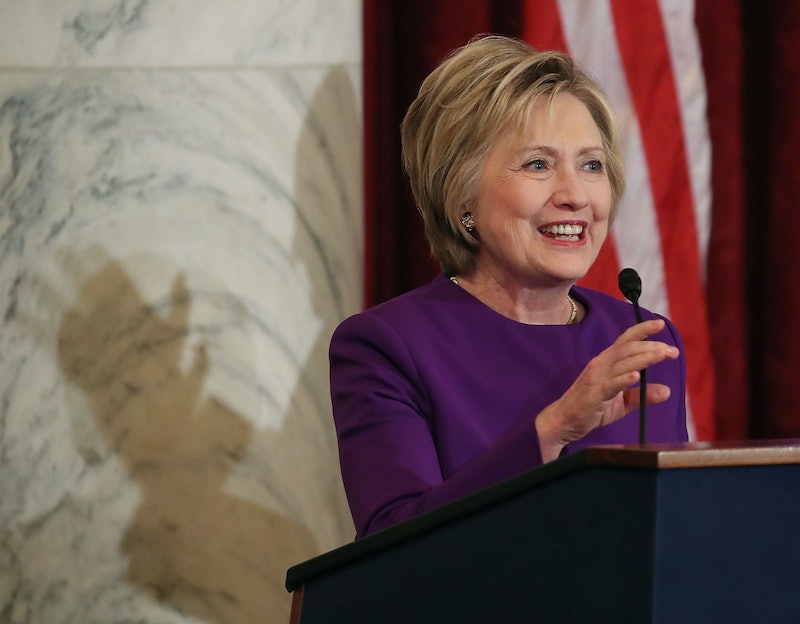 On Thursday evening, in one of the few public appearances she has made since being defeated by Donald Trump in the presidential election, Hillary Clinton condemned the spread of fake news, citing the very dangerous implications its propagation can have in the real world. During an event honoring outgoing Senate Minority Leader Harry Reid, Clinton reflected on the increasing prominence of fake news online and the dangers it poses. Clinton asserted, "The epidemic of malicious fake news and fake propaganda that flooded social media over the past year, it's now clear that so-called fake news can have real-world consequences."

Clinton's comments come in the wake of the recent "Pizzagate" incident. Pizzagate describes an outlandish conspiracy theory that popular D.C. pizzeria Comet Ping Pong is the central hub of an international child-trafficking ring that has ties to Hillary Clinton. These completely untrue rumors were perpetrated online and scarily culminated in a man coming to Comet Ping Pong with a loaded gun on Sunday to "investigate the issue." He fired at least one shot during the incident, but thankfully, no injuries were reported.

Sunday's incident, coupled with the extensive death threats and harassment that the entire block of businesses around the pizzeria have recently faced, epitomize the type of dangerous real-world consequences to which Clinton was referring in her speech.

Indeed, the promulgation of fake news is not only dangerous in its distortion of facts and truth, but also because it is a threat to safety and security. As Clinton aptly described in her statement, "This isn't about politics or partisanship — lives are at risk. Lives of ordinary people just trying to go about their days, to do their jobs, contribute to their communities."

In addition to drawing attention to the implications of fake news, Clinton also advocated for both public and private sectors to curb its spread. She commended pending Congressional legislation to address foreign propaganda, and also noted that Silicon Valley is beginning to find ways to address the pervasiveness of fake news.

However, while noting this momentum, Clinton's speech implied that she likely believes much work still needs to be done to comprehensively and effectively address the issue. In reflecting on the urgency of the matter, Clinton stated, "It's a danger that must be addressed, and addressed quickly ... It's imperative that leaders in both the private sector and the public sector step up to protect our democracy and innocent lives."

Overall, Clinton's decision to discuss the problem of fake news in a rare post-election appearance clearly indicates the significance she believes the issue holds and the importance of addressing it before it becomes even more problematic. Policymakers, business and technology leaders, and the general public would wise to heed her advice and actively work towards a solution to curb the spread of fake news, for the sake of promoting facts and protecting lives.