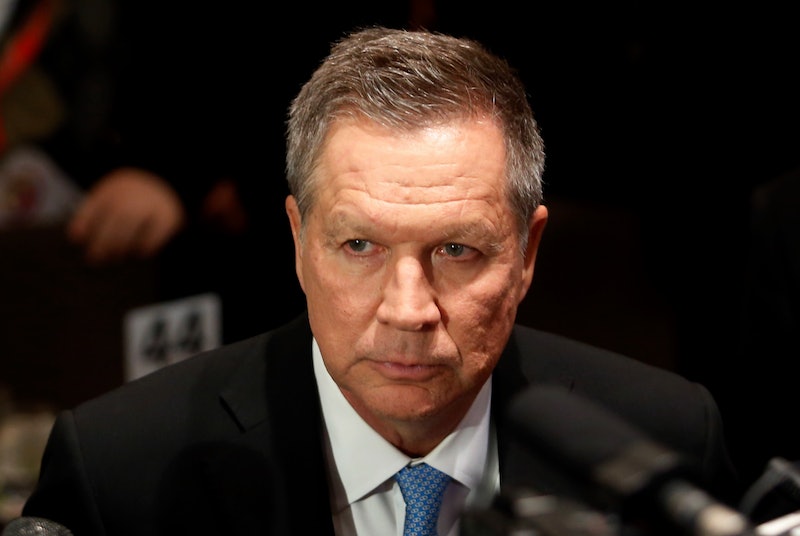 On Wednesday, the Ohio state legislature passed a fetal "heartbeat bill" that would ban abortions in the state once a fetal heartbeat can be detected, which usually occurs approximately six weeks into pregnancy. Now that it has passed through the legislature, Ohio Governor John Kasich will decide to sign the heartbeat bill into law or veto the restrictive anti-abortion legislation.

While Kasich has previously expressed hesitation about heartbeat legislation due to constitutionality issues, his veto or lack thereof cannot be assumed either way; therefore, it is incredibly important to advocate against the bill in the next few days to help encourage a veto from Kasich.

The most direct way to protest the legislation consists of contacting Governor Kasich's office to express your concerns. This Facebook event offers a script that you can use to indicate your concerns with the bill and share requests with the Governor. Kasich's office number is (614) 466-3555. If you prefer to contact the Governor via email, NARAL Pro-Choice Ohio offers an email template directly on its website, which you can fill out and submit electronically to Governor Kasich's office. Should you choose to call or email (or both), it is recommended that you do so multiple times to ensure your message is heard.

In addition to directly contacting Kasich's office, a quick and easy way to protest the heartbeat bill consists of signing online petitions. Bustle has compiled a list of six key anti-heartbeat bill petitions from various rights advocacy organizations that you can sign. While petitions may seem like a more passive way to protest the bill, they are still incredibly important; having several petitions with thousands of names on them indicating opposition to the bill serves as a very powerful reminder to Kasich of how many people are unsupportive of this legislation and would be disenfranchised by it.

Furthermore, acting as an advocate and information disseminator in your community and online can help serve as a means of protest. Take the initiative to inform friends and family about the bill and why it will have such negative implications for women, and ask for their support in helping you protest. Also, make a particular effort to reach out if you have friends and family in Ohio, ensuring that they know about the bill and its ramifications and asking them to get involved in helping ensure that it is vetoed.

Finally, particularly if you are in Ohio, consider organizing an in-person protest (or joining one should the option become available). One such protest already came to fruition outside the Ohio governor's mansion soon after the passage of the bill, and there is certainly opportunity for follow-up protests. Protests are so important because they serve as a very visual and public means of opposition, so, if you are up for it, consider taking the leap and organizing or getting involved in a heartbeat bill protest.

Overall, if you oppose the heartbeat bill and want to ensure that Governor Kasich vetoes it, right now is the time to make sure your voice is heard. These are just some of the ways in which you can quickly and easily make a significant difference in helping ensure that women's rights and lives are protected.