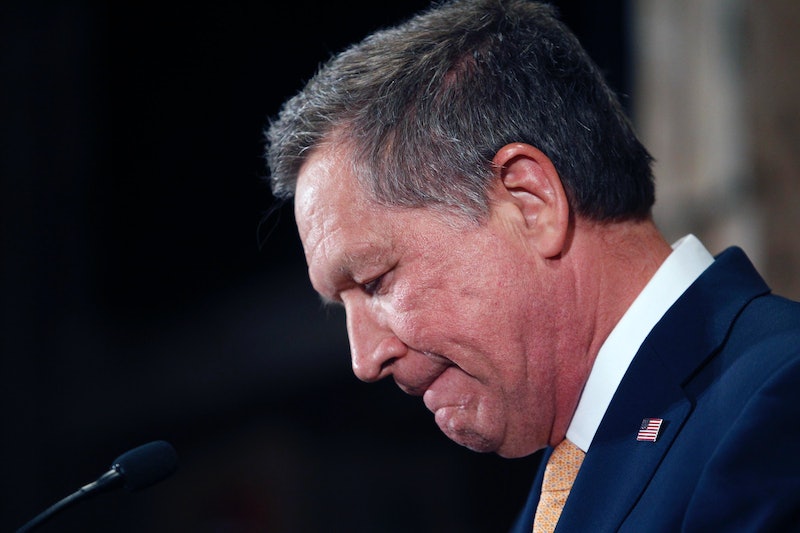 Ohio's state legislature has passed a bill with devastating consequences for reproductive rights. But is the Ohio "heartbeat bill" constitutional? House Bill 493 would ban all abortions once a fetal heartbeat is detected, which is around the six-week point of a pregnancy. As in, before many women would even figure out they were pregnant, leaving no window for abortion. The bill also controversially doesn't offer exceptions in cases of rape or incest, and no other state would have such a small window for abortions. Ohio Gov. John Kasich, who holds anti-abortion viewpoints, is still in the 10-day signing window for the bill. But even if he signs it into law, the heartbeat bill most likely won't hold up in court, based on past precedent.

The bill was passed on Dec. 6, after the election of President-elect Donald Trump inspired the emboldening of anti-abortion legislators, the Ohio Senate president, Republican Keith Faber, told CNN. He explained that "a new president, new Supreme Court justice appointees change the dynamic," and increase the bill's chances of winning a court battle. Trump has previously explained that he would appoint pro-life Supreme Court justices, with the intent of having the Supreme Court overturn Roe v. Wade, the case which secured the right to abortion in the United States.

For those concerned about this attack on reproductive rights, there is most definitely reason to be concerned. However, there's also a good chance the bill might not survive. Abortion bans in other states, including Arkansas, Arizona, and North Dakota (which passed a similar heartbeat bill) were all overturned by courts, and the Supreme Court wouldn't hear appeals on the cases, Vox reported. The reasoning behind this is that the restrictive abortion windows wouldn't work under Roe v. Wade, which protects the right to have an abortion before a pregnancy is viable or, in other words, until a fetus is able to survive outside of the womb.

So even if Kasich signs the Ohio bill into law, it likely wouldn't go into effect due to court action. But even if the "heartbeat" abortion restrictions seem unlikely to become a reality, it's still important for people who respect reproductive rights to make their voices heard, whether by protesting the Ohio bill or by donating to feminist organizations. That way, maybe state legislators would stop attempting to institute restrictions or bans on abortion.