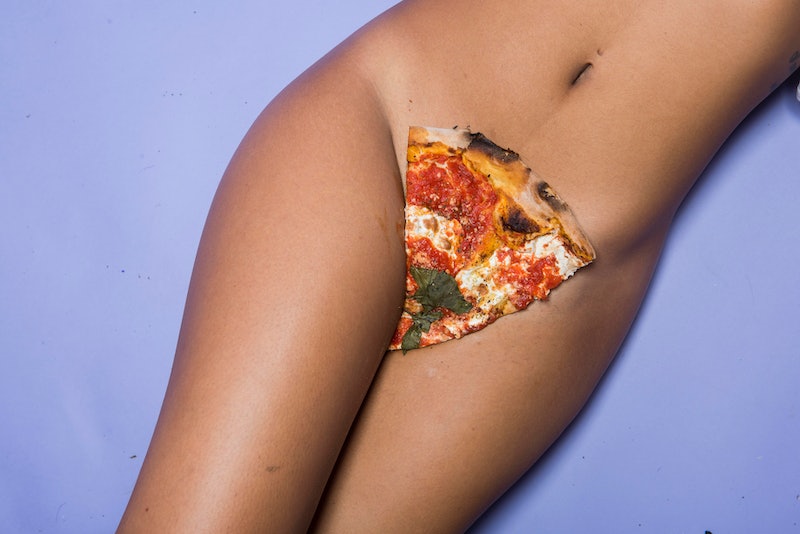 What you choose to do with your pubic hair is totally up to you. While a 2016 study published in JAMA Dermatology found that most women say they groom their pubic hair, if you love your full bush, keeping doing you. But if you're in the majority of women who do make the effort to trim, shave, wax, or laser, there's a downside to grooming that you should be aware of. According to a new study, grooming your pubic hair can lead to an increased risk of sexually transmitted infections — and there are two theories on why.

In a study published in the journal Sexually Transmitted Infections, Dr. Charles Osterberg from the University of Texas Dell Medical School surveyed over 7,500 Americans on their grooming habits, sexual history, and whether or not they’ve had an STI. It was found that people who say they groom daily or weekly were 3.5 to four times more likely to also say they’ve had an STI such as herpes, HPV, chlamydia, or HIV. Since the study was observational and based on results from a self-reported survey, the authors recognize their study has some obvious limitations. It’s pretty impossible to determine whether grooming caused an infection, or if an infection was already present. However, they do have a couple of theories that may explain why.

1. Grooming Can Cause "Microtears"

"Shaving and waxing causes micro tears in the vaginal skin and can increase the risk of infections namely a virus, Molluscum contagiosum which is harmless, but can be very annoying," Dr. Jessica Shepherd, MD, OB/GYN, the Director of Minimally Invasive Gynecology University of Illinois at Chicago, tells Bustle.

So treat the area gently after shaving or waxing. Also, after shaving and waxing be sure to give yourself a day or two before having sex since grooming can cause damage and microtears. "This leaves a tiny wound just under the surface and if sexual intercourse occurs shortly after it can increase exposure to STDs," Shepherd says.

The study found that people who groomed were more likely to be younger, more sexually active, and have more partners than people who didn't groom. Those people were also more likely to report having an STI. Again, cause and effect can't really be determined due to the nature of the study. But either way, a link between constantly pubic hair grooming and an increased risk of STIs is there.

So What Should You Do?

"While women should never feel obliged to remove their natural hair growth in the pelvic area, many still choose to do so," Shepherd says. "If you do decide to groom, whether it be shaving or waxing, it's imperative that you do it properly to avoid the health risks." Just be smart and careful. This means properly prepping yourself by cleansing, exfoliating, and sanitizing before you begin grooming, and treating it afterward.

With the exception of the possibility of crab lice, Carol Queen, the staff sexologist at San Francisco-based sex store, Good Vibrations believes natural is healthiest. "When people think that removing hair is more sanitary, they ignore the reason for the hair — to protect the genital area,” Queen tells Bustle. “It does so in two ways: as a physical cushion against friction and irritation and as a partial barrier to pathogens. If you want the pubic area to be clean, wash it!”

It's important to remember the study found an association, not a causation, so until more research is done, don't feel like you need to change up your grooming routine ASAP. The most important takeaway here is to just be mindful of your body and take care of it — from shaving carefully to getting tested to talking about safe sex with a partner.