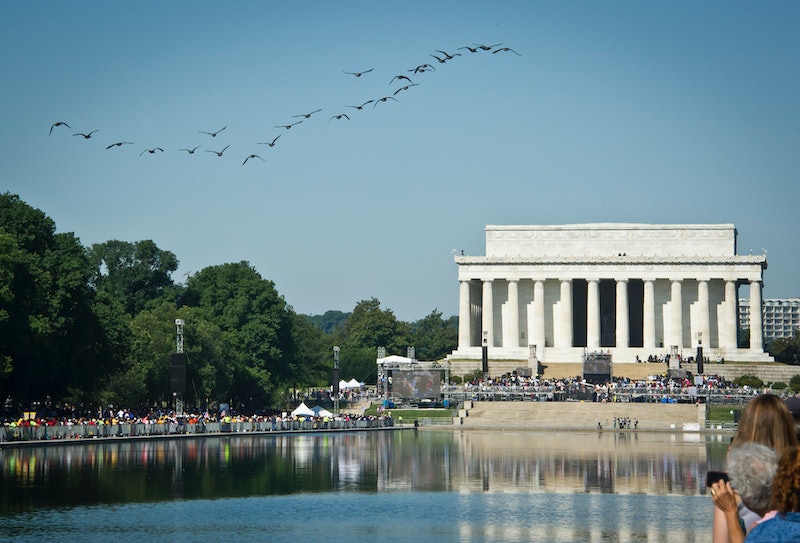 If you're planning on going to Washington, D.C. to advocate for women's rights the week of the presidential inauguration, take note of a change in location. The Lincoln Memorial will no longer welcome the Women's March on Washington, so the organizers have had to find a new spot to host the tens of thousands of engaged citizens coming in from near and far. According to the Guardian, the National Park Service has filed the paperwork to block off large sections of the National Mall to protesters, including the areas around the Washington Monument and Lincoln Memorial. If your first thought after that was Pennsylvania Avenue, move along — that will be roped off for the "inauguration festivities" as well.

The National Park Service was apparently working on behalf of the Presidential Inauguration Committee when they filed the "massive omnibus blocking permit" that will block the aforementioned areas off to everything except inauguration activities for the days surrounding Jan. 20, Inauguration Day. The Women's March on Washington is set to take place the day after Donald Trump's inauguration, but with the blocking permit in place, participants still won't be able to march in front of the Lincoln Memorial. Like so many things that the country has been witness to in the last couple of months, having this much important public land blocked off to protesters is unprecedented.

The Women's March went viral on Facebook in the days and weeks following the election, and the national event page now shows that there are 137,000 people who report that they are attending with another 227,000 interested. There are also separate events for each state and a number of locations abroad, so the number of people hoping to get involved could easily reach into the hundreds of thousands. They currently have the Lincoln Memorial as the location where the march will take place, which makes sense given the site's history. It has been an important site for civil rights protests since the first half of the twentieth century, most notably because Martin Luther King Jr. gave his "I have a dream" speech there.

The organizers have now decided on an alternative location, which they haven't yet announced publicly. In the meantime, they're working with Mara Verheyden-Hilliard, a constitutional rights litigator, who believes that the block is an "illegal abridgment of first amendment rights." The Constitution does, of course, protect the right to protest — it's written pretty clearly in the First Amendment. Less clear is the question of whether this even will be able to take place as planned, in the most meaningful spot possible.