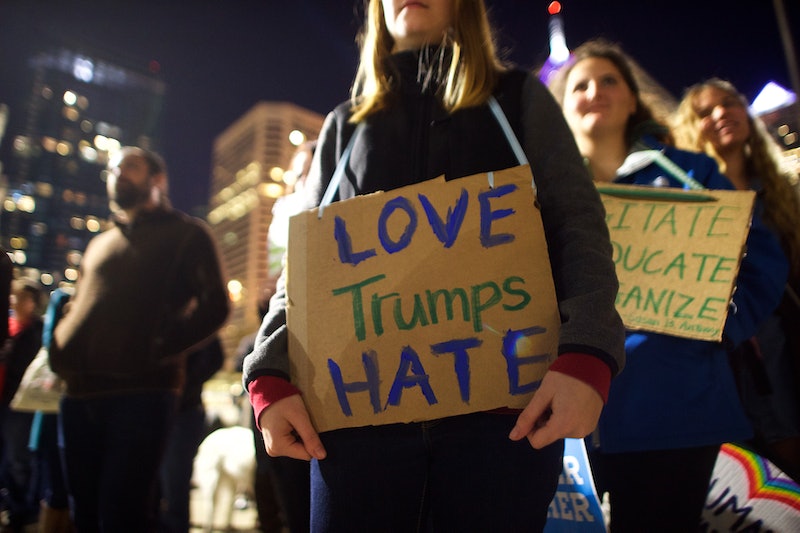 On Jan. 21, the day after Donald Trump's inauguration, women will be marching from the Lincoln Memorial to the White House in Washington, D.C. to protest Trump's policies. Exactly what policies they are objecting to are as varied as each of the protestors — and through Mogul's #IWillMarch campaign about the Million Women March, many of those protestors are answering why they will be marching in many different ways.

The Million Women March's co-organizer, Breanne Butler, told The New York Post recently that the event's goal is to amplify the voices of the people most vulnerable under a Trump administration. "We are doing it on his first day because we want to send a very strong statement... saying all of the marginalized groups that you’ve attacked during your campaign and that have been silenced throughout the years — we’re here unified together as one," she said.

Similarly, Mogul, a social media platform for women all over the world, is aiming "to allow individuals to voice their thoughts on why they specifically support women's rights," VP of Content and Community Bethany Heinrich tells Bustle. "Whether marching in person or in spirit on Jan. 21, we wanted to provide a safe place where the global community could shed light on issues of concern in their specific area when it came to standing up for the rights of women in their lives, and for all women in general. As a result, we are seeing men and women from across the world posting around the themes of marching for their daughters and other family members, for victims of domestic violence, for the right to choose, and their hopes for the future regarding equality."

The event has 122,000 confirmed guests on Facebook, and through Mogul's campaign, some of these women have powerfully and eloquently described why they're attending.

"I will march for women to have the right to choose. The right to choose without shame," wrote one Mogul user under the name Chep. "The right to say 'no' without being questioned why because 'no' is a complete sentence. A woman’s right to choose our own path, our religion or none, our career and education ambition and whether to have children or none and stand strong in our decision." This writer may be referring to Trump's intention to overturn Roe v. Wade, his belief that he can "do anything" to women, or a number of issues. A woman's right to make her own choices has come under threat in many different ways in the United States and around the world.

Nitya Satyani, a writer from India, participated with a call for gender equality across the globe, focusing on how women can change their own behavior to combat internalized misogyny. "After proving to the world that we can do everything men can, every woman is now fighting a passive aggressive war... with other women," she wrote. "Let's fight for equality. Equality among women…. and end the one up-womanship."

Some are marching as a more general gesture of support for women. "I will march for these women who have overcome — not the gender gap, nor done anything worth global recognition — but the ones who are daily inspirations for themselves. Everything I'm doing is for my children, who will exist maybe tomorrow, maybe six months from now, maybe three years from now — because when they're born, I want to instill in them the same kind of fiery drive my mother instilled into me," explained writer Courtney Dercqu. "I will march for those everyday women, because at the end of the day, they are my inspiration because they are the ones who never give up, who never give in."

You can share why you are marching — or why you support those who will, regardless of whether you'll make it — by signing up and posting on Mogul with the hashtag #IWillMarch.