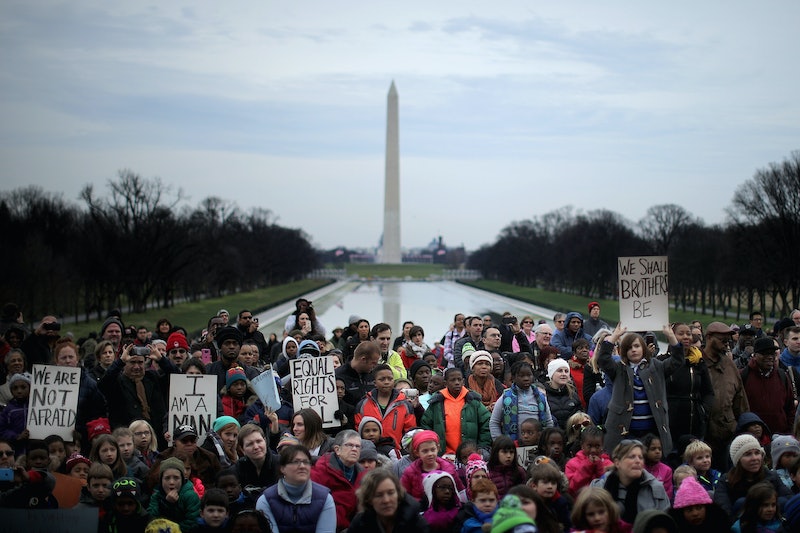 On Thursday, we learned that the Women's March on Washington wouldn't be allowed to protest in front of the Lincoln Monument on Jan. 21, thanks to the Presidential Inauguration Committee. While so far this is just an isolated case, it's absolutely necessary to remember that barring protests from public land is not a normal thing to do. The Lincoln Memorial and the surrounding public area has been an important site for protests and marches since the first half of the 20th century, soon after the memorial's completion, and it's an unprecedented move for the Women's March on Washington to be banned from the site.

The first major, memorable protest to take place at the Lincoln Memorial was when opera singer Marian Anderson gave a concert there in 1939, because she wasn't allowed to perform at Constitutional Hall. That event drew about 70,000 attendees, and ever since then, people have gathered in huge groups to make their voices heard at that most meaningful of places. In 1943, 400 rabbis marched to raise awareness of the Jews being killed in the Holocaust; the Black Panthers held a rally there in 1970 to promote their "Revolutionary People's Constitutional Convention"; and most famously, Martin Luther King Jr. gave his "I have a dream" speech there in front of 200,000 protesters. Authorities worried that the protest would turn violent, but instead of canceling it or forcing it to move, they prepared the hospitals and the police. That's how things are supposed to work.

Forcing the Women's March on Washington to move elsewhere is not only unheard of, it's also an affront to the American democracy. These places are symbols of the democratic institutions that the country has built up over the last couple of centuries — institutions that are stronger than the people in charge of them, but that still must be carefully maintained.

The National Parks Service and the Presidential Inauguration Committee have their reasons to filing the blocking permit; it's basically a construction zone, an NPS spokesman told the Guardian. But in such a tense political climate surrounding the election of a president-elect who has already shown so little concern for the very rights that the First Amendment of the Constitution protects, forcing this one, huge march to move is a significant gesture. It's a slippery slope — what will the excuses be next time? What about those libel laws that Donald Trump claimed he wanted to open up? If freedom of the press and the freedom to protest are no longer held sacred, what's next? Limiting protests is not a normal thing to do in an open democracy, and it cannot be allowed to become one.

More like this
How To Fight For Reproductive Rights, Based On How Much Time You Have
By Courtney Young
Twitter Was Saying The Same Thing About Sam Ryder’s Surprising Eurovision Result
By El Hunt
President Zelensky Spoke Out On Ukraine's Chances Of Hosting Eurovision Next Year
By Sam Ramsden
Harry Styles Called For "Backlash" In Powerful Statement On Abortion Rights
By El Hunt
Get Even More From Bustle — Sign Up For The Newsletter