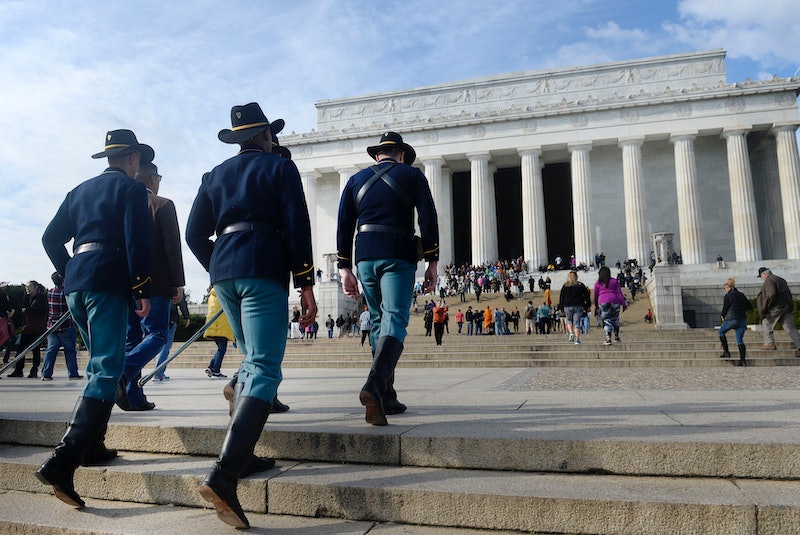 The Lincoln Memorial in Washington, D.C. has long been the site of rallies, with dissenters gathering around the monument from the civil rights protests of the 1960s to the Million Man March in 1995. But with a sweeping permit that bans access to broad swaths of D.C.'s public land, the National Park Service is seeing to it that no such protests occur in the weeks before and after President-elect Donald Trump's inauguration. The ban, which comes at the request of the Presidential Inauguration Committee, will block protests from the Lincoln Memorial, large areas of the national mall and Pennsylvania Avenue, and the Washington Monument.

For the thousands of women who were planning to descend upon Washington in protest of Trump's inauguration, this creates a unique problem. The Women's March on Washington, scheduled for the day after the inauguration, will be unable to use the popular Lincoln Memorial for its protest.

The event quickly garnered national attention in the days following the election, and currently shows 137,000 people attending on its official Facebook page. But with the NPS filing a "massive omnibus blocking permit," the event will need to find another space for the protest — quite a feat given how little public space will be available in the days and weeks both before and after the inauguration.

But Mara Verheyden-Hilliard, executive director of the Partnership for Civil Justice Fund, is hoping to reverse the NPS' decision on the grounds that it may be unconstitutional. She is not a part of the official group of organizers, but is working alongside the Act Now to Stop War and End Racism (ANSWER) Coalition. Verheyden-Hilliard has previously led court battles to protest access on inauguration day, though she stressed to the Guardian that this instance is "extremely unique" given the decision to specifically block off public spaces, which have served as the typical grounds for dissent for decades.

Of course, the park service securing space for the Presidential Inaugural Committee isn't without precedent. It is a historical transaction between the service and committee that keeps the inaugural activities effectively flowing. But Verheyden-Hilliard argues that the denial of protest permits — the Answer Coalition was already denied a permit for a rally on Pennsylvania Avenue — has far exceeded previous inaugurations and is unconstitutional.

"This is public land. This land belongs to all of us. The park service's role is only to act as a neutral administrator and steward of public land," she told ABC News. "They have done a massive land grab, to the detriment of all those who want to engage in free speech activities."

Yet Verheyden-Hilliard is optimistic that the park service will ultimately turn their decision around in time for the protest. She told the Guardian: "We’ve issued the demand to the parks service because this is an illegal abridgment of first amendment rights... We expect they’ll conform to the constitution and make permits available."

Despite these setbacks, the organizers of the event are also certain that the march will go on. The group told People that they "are in conversation with the police" and are in the permitting process to secure a new location.