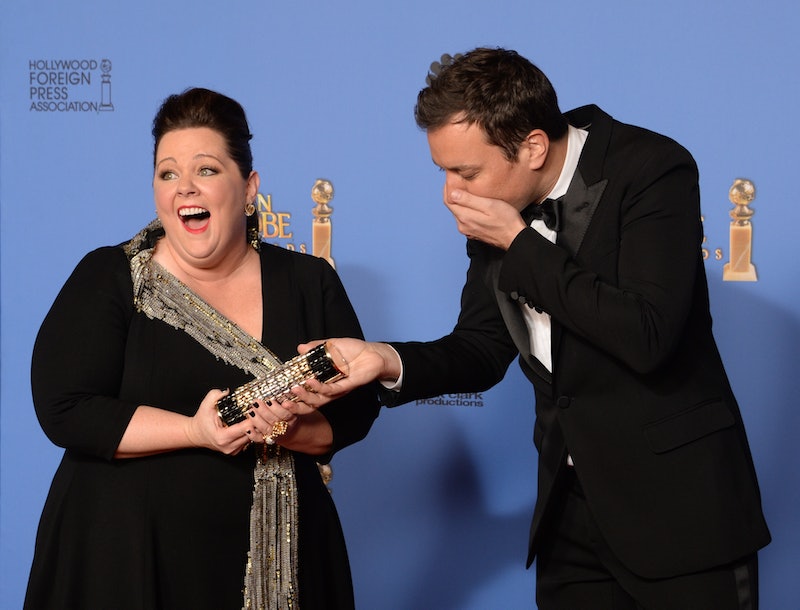 As anyone who loves watching award shows can attest, the Golden Globe Awards is certainly one of the more unpredictable shows out there. As the boozed-up, more casual, fun sibling of the Oscars, you can always rely on this award ceremony to deliver the sort of jokes, acceptance speeches, wins, and totally unscripted moments that you just wouldn't get at any other award show. Some of the best moments from the Golden Globes have been those within which actors and celebrities let their hair down, have fun, or provide a candid display of their emotions. There's something honestly very special about the awards show, and as these facts about the Golden Globe Awards prove, that's something which has always been historically true for the event.

With the 74th Golden Globe Awards taking place on Jan. 8, 2017, it's about time that we all scrub up on our knowledge of the show, so that we might know what to expect. Except, let's be honest, we likely never will. The Golden Globes are unpredictable, and that's just the way people like it. So I recommend that you start stockpiling the wine, plan a (very) early dinner, and be prepared to take your heels and walk around with them in your hand all night, because here's all the strange facts about the show that will definitely get you in the mood for the upcoming ceremony.

1. You Have The Rat Pack To Thank For All Those Celebrity Presenters

Prior to 1958, celebrities didn't hand out trophies to other celebrities. No, ma'am. Back then, Hollywood Foreign Press Assocation members were instead tasked with that job. That's up until Frank Sinatra, Dean Martin and Sammy Davis Jr., aka The Rat Pack, stormed the Golden Globes stage with their whiskey and cigarettes to dish out the trophies. Afterwards, the HFPA then asked the notorious trio to repeat their performance the next year, and the tradition has continued with different celebrities handing out awards on a yearly basis.

2. The Golden Globe Trophy Is Heavier Than You Might Realize

Plated in 24-karat gold and estimated to cost $800 each, each Golden Globe trophy apparently weighs 5.5 pounds. Which is approximately the weight of a slightly chubby chihuahua.

3. Only Seven Celebrities Have Ever Hosted The Show

4. Amy Poehler Is The Only Host To Have Won An Award While Hosting

Poehler, as well as being one half of the greatest Golden Globes hosting team of all time, also happened to win an award while hosting. In 2014, the superbly funny actress won for her lead role on Parks And Recreation.

Back in 2014, Variety noted that the Golden Globe Awards dinner is served up to nominees and guests at around 3:30 p.m. That way, when the show starts at 5 p.m., the broadcast isn't sullied by the background noise of dishes or clinking silverware.

6. The 2008 Golden Globe Awards Didn't Have An Actual Show

When members of the screen actors guild pledged not to cross picket lines in solidarity with the Writers Guild Of America writers strike, the Golden Globe awards was forced to cancel the ceremony. Instead, a televised press conference replaced it, with actors like Jeremy Piven apparently receiving his statuette in his driveway.

7. Three Actors Have Won Two Awards In One Year

8. The First-Ever Ceremony Was Held During A Luncheon

Having been founded in 1943 by 21 foreign journalists, the ceremony was held at 20th Century Fox and had only five categories (Best Motion Picture, Best Actor, Best Actress, Best Supporting Actor, and Best Supporting Actress) — the winners of which were given scrolls.

9. Two Actors Have Almost Missed Their Winning Moment, Because They Were In The Bathroom

The first time was in 1998, when Christine Lahti had to be hurried out of the bathroom when she won the Best Actress in a Drama TV Series for Chicago Hope. (Robin Williams, adorably, jumped up on stage and killed some time for her return.)

Unbelievably, three years later when Renée Zellweger made the same mistake and left Hugh Grant awkwardly awaiting her award acceptance when she won for Nurse Betty. Zellweger was found and rushed to the stage, just in time to stop Grant from accepting the honor on her behalf (and to confess that she'd been removing lipstick from her teeth in the bathroom at the time that her name was called).

10. An Award Was Once Given To Someone Else By Its Recipient

In 1998, Ving Rhames won the Best Actor in a TV Miniseries award for his role in HBO's Don King: Only In America. However when it came time to accept his trophy, Rhames invited fellow actor Jack Lemmon to join him on stage (who'd been nominated for his role in 12 Angry Men) and sated, "I feel that being an artist is about giving, and I'd like to give this to you," before handing Lemmon the trophy. The moment garnered a more than worthy standing ovation and now I seriously have something in my eye.

11. Emma Thompson Once Presented An Award While Making A Truly Feminist Statement

In 2014, Thompson lived the dream for the rest of us mere mortals by quite casually presenting an award with her high heels in one hand and a cocktail in another. Like an absolute boss, I might say.

12. Two Awards Have Been Declined Throughout The Show's History

In 1970, the producers of Z refused the Best Foreign Language Film award, as they wanted the film to be included within the main Best Motion Picture category instead. And in 1973, Marlon Brando declined his Best Actor accolade for The Godfather in a protest against American "imperialism and racism," for the way in which Native Americans had been treated by the movie industry.

13. Elizabeth Taylor Once Read Who The Winner Was Before She Read Out The Nominees

In 2001, while presenting the award for Best Drama, Taylor made the major faux-pas of opening the winning envelope of the category before she'd even named the rest of the nominees. The audience panicked, someone came out to stop her, and thankfully nobody had to hear who had won the award far earlier than protocol would usually allow.

I'm so ready for the 2017 ceremony to happen now. Here's hoping that this year no famous actors get stalled from accepting their trophy due to being in the bathroom. (Ah, who am I kidding? I totally hope this is the case.)

More like this
Amanda Seyfried Reflects On 'Mean Girls' & "Gross" Remarks That Men Made After It
By Jake Viswanath
Laura Dern Said “Cultural Awareness” Made Her Rethink This 'Jurassic Park' Fact
By Grace Wehniainen
Colin Firth Revealed His Favourite Mr. Darcy (& No, It's Not Himself)
By Sophie McEvoy
Watch The Dramatic First Trailer For Netflix's Jennifer Lopez Documentary
By Alyssa Lapid
Get Even More From Bustle — Sign Up For The Newsletter