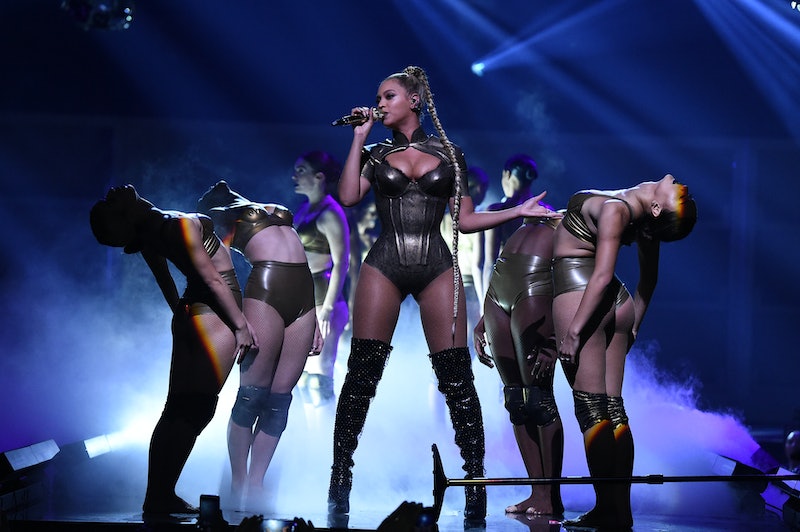 One of the greatest mysteries of 2016 has been solved: the origin story behind Beyoncé's now iconic Red Lobster "Formation" lyric was revealed by Pitchfork. How the home of those delicious cheddar biscuits worked their way into the song will make Bey fans cheer. During an interview with Red Bull Music Academy, music producer Mike WiLL Made-it discussed the contributions he and Rae Sremmurd made to "Formation." The best secret he dropped was that flawless Red Lobster reference was originally going to be something way more high end — namely a trip to Margiela.

That's right, the original lyric was "If he f*ck me good, I’ll take his ass to Margiela," and it was penned by Slim Jxmmi. Margiela refers to Maison Margiela's luxury brand, and, while the name drop would have made sense in your average hip hop video, "Formation" was a deeply personal anthem for Beyoncé. Throughout the song, she weaves together her experiences growing up in the south with the life of success and fame she has today while still keeping the song grounded in the reality of what it is like being a black woman in America. Margiela is a brand not everyone has heard of, and it's certainly not an instantly relatable place your average person has visited at some point in their lives.

When Beyoncé was presented with the lyric by Mike WiLL Made-it, she was inspired to put her own spin on it. She took what was a solid, but ultimately less universal, lyric and turned it into "when he f*ck me good, I take his ass to Red Lobster." One small tweak gave birth to the lyric that launched a thousand memes and made you crave Red Lobster all year long.

It just proves that, while Beyoncé's Lemonade visual album was a collaborative process, it was her heart and soul that made it come to life. Every lyric was carefully written to tell the story Beyoncé wanted to tell. The root of the Red Lobster line came from someone else, but she is responsible for making it an unforgettable anthem to female empowerment. No offense to Margiela, but Red Lobster was a way better choice. It made the lyric sexy, memorable, and hilarious, while also touching on an experience that is real for everyone and not just those with lots of cash to spend.

Without Beyoncé's genius, "Formation" would have been a completely different, and way less compelling, song. As in all things, Queen Bey knew best. Is anyone else craving cheddar biscuits now?

More like this
Taylor Swift, Kerry Washington & More Speak Out On Uvalde Mass Shooting
By Jake Viswanath
The Joys of Eating
By Samantha Rollins
BTS Is Visiting The White House To Discuss Anti-Asian Hate Crimes With President Joe Biden
By Jake Viswanath
Harry Styles Performed A Snippet Of Taylor Swift’s “22” & The Crowd Went Wild
By Jake Viswanath
Get Even More From Bustle — Sign Up For The Newsletter