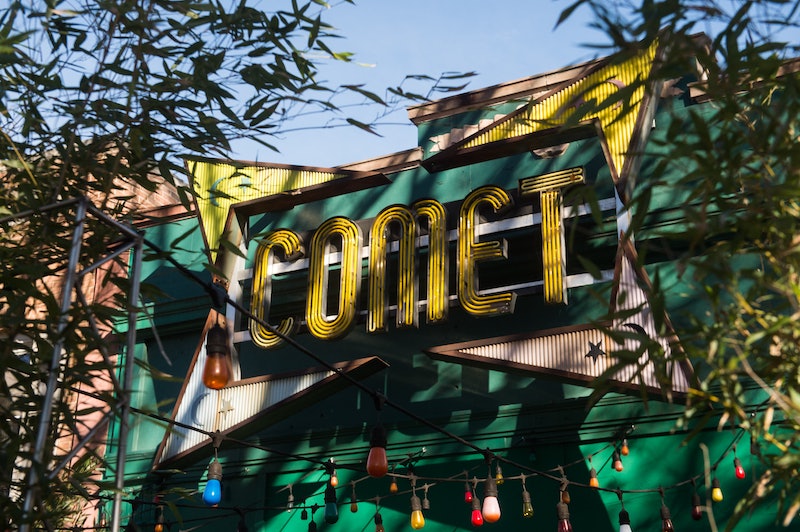 If you've been following the news lately ― or, rather, the news about conspiracy theory-laden "fake news" ― then there's a pretty good chance you've heard what just happened to Washington, D.C. pizzeria Comet Ping Pong. The target of a baseless, hysterical, and ever-expanding conspiracy theory known as "Pizzagate," the popular D.C. eatery has been bombarded with threatening phone calls, condemning reviews, and last week, the arrival of a gunman who fired off shots inside the restaurant. That is why it's now raising money ― here's how to donate to the Comet Ping Pong pizzeria, because its employees and customers are being put in danger by deranged internet theories.

The conspiracy theory itself, in simple terms, is that the pizzeria is a front for child sex abuse that involves former Clinton campaign manager John Podesta. It's an utterly fact-free and dangerous accusation, drenched in the same insular, wild jumps to conclusions that typify internet conspiracy theories ― it all essentially sprouts from the idea that references to "pizza" in the Wikileaks-released Podesta emails couldn't possibly actually be referring to pizza, and are more likely code for some sort of child sex trafficking operation.

That's why an armed man descended on Comet Ping Pong last week ― he was trying to rescue the non-existent group of children he believed were being held in captivity inside the restaurant. He didn't find any, needless to say, at which point he surrendered to the police.

The incident is precisely why Comet Ping Pong is looking to up its security, among other things, and it's set up a GoFundMe page to help out, with a target goal of $28,000. As of this writing, it's brought in more than $11,000, but is still less than halfway from it's stated goal. Here's how the page describes what the money will be put towards:

- Lost wage compensation for our amazing cooks and FOH staff.- Paid security we have hired to ensure the safety of our patrons and staff.- Legal expenses.- Security upgrades.- Physical damage.

It's worth noting that if you're interested in donating, but you're also averse to the idea of having internet conspiracy theorists start examining your online life, you might want to do so anonymously, because some Pizzagate believers on social media have already suggested digging into whoever donates.

The thing about these kinds of theories is no amount of exculpatory reporting can dissuade the people who've given over their minds and hours upon hours of their lives to it ― the Pizzagate gunman, for example, has already been widely dismissed by the Pizzagate believers as a plant, a trick to discredit their "investigation." In short, in the mind of the Pizzagater, any contrary evidence is lies from shadowy and powerful forces, and lack of evidence is suspicious, and reason to dig further.

Here's hoping the Comet Ping Pong ― as well as the slew of other businesses this ever-expanding conspiracy theory is pulling together, including Roberta's Pizza in Brooklyn ― will be free of this dangerous stigma soon. But for the time being, it's clear that the scourge of baseless suspicion and insinuation is still rolling along at full strength.