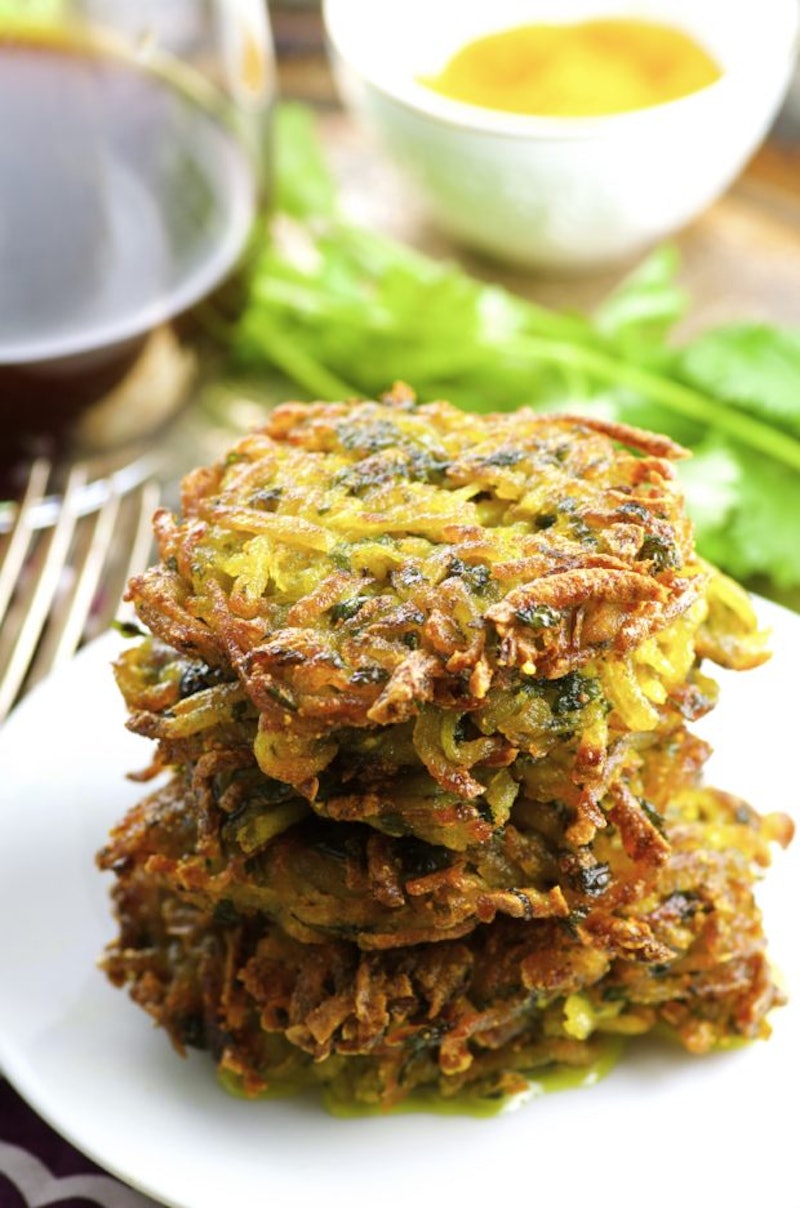 When I told my dad I was heading home for the holidays this year, he said, "Great! I'll make you some latkes!" I responded, "Sounds good! So long as they're vegan!" and I promised to send him some vegan latke recipes. Though the standard latke calls for eggs, I knew it wouldn't be a problem to find a vegan latke recipe online. As I suspected, luckily, it's totally doable to make vegan latkes, and there are plenty of traditional vegan latke recipes to be found. I did some digging, and rounded up some of the more interesting ones here. (Hint hint, Dad.)

While traditional latkes are made with potatoes and onions, I also see no reason not to try some variations on the form. Traditional Hanukkah food is really just all about frying things in oil, so as long as you're making a fritter, I think it can count as a latke. As a result, I've included some classic-style vegan latke recipes below, as well as some more unique takes on everyone's favorite applesauce and vegan sour cream vehicle.

Happy Hanukkah, and remember: you are allowed to make these delicious vegan latkes any time of year. The Maccabees would want it that way.

Since I'll have more than a few less-than-traditional latke recipes on here, I wanted to start off with this solid, classic vegan latke recipe by May I Have That Recipe. Make these if you just crave a standard latke, minus the egg.

A slightly more original take on traditional latkes, these haystacks by Minimalist Baker use corn in addition to potatoes. Starch+starch+oil? Yes, please.

Yes, I know they aren't potato-based, but I just love corn fritters. Hanukkah is really just about frying things in oil, so take a spin on the classic latke and make these sweet and spicy corn fritters by Vegan Richa, complete with vegan sour cream.

These gluten-free latkes by Pure Ella are healthier for going heavier on the parsnips and lighter on the potatoes (and egg, of course). Still fried in oil though, not to worry.

Go beyond traditional latkes by making these amazing samosa potato pancakes by Minimalist Baker. I mean, everyone knows samosas are the best appetizer, so why not make them into latkes?

Another less-traditional spin on latkes, these chickpea pancakes by Vegan Richa look delicious — and more nutritious — than your average latke.

These traditional potato-based latkes by Vegan Richa have a delicious twist in the form of a creamy avocado basil sauce.

I can't have just one samosa latke recipe on here! This recipe by The Pretty Bee incorporates scallions and frozen peas and looks damn delicious.

If you really want to celebrate that oil, why not deep-fry some onions this Hanukkah? Onions are half of the classic latke anyway, but Indian spicing will make this Vegan Richa recipe a unique addition.

This recipe by Vegan Richa uses quinoa for some extra nutrition and protein with your fried potatoes.

These smashed baked potatoes by Oh She Glows look like partially-reconstructed latkes and fully-assembled deliciousness.

These colorful latkes by Simply Delicious incorporate not only potatoes, but also carrots, parsnips, and zucchini. Finished with an avocado cream, they look like something you will definitely not have any leftovers of.

Images: May I Have That Recipe; Simply Delicious; Oh She Glows; Vegan Richa; The Pretty Bee; Minimalist Baker; Pure Ella