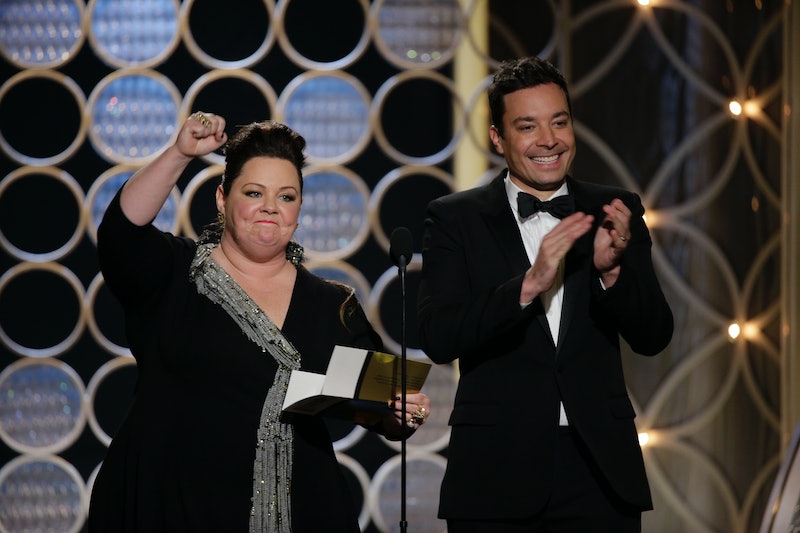 If all of the boozy, sparkling fun of the holiday season is already giving you a serious hankering for the glitz and glamour (and celebrity partying) of awards shows, then you may be wondering, when are the Golden Globe Awads taking place? Thankfully, the truth is that you don't have too long to wait until you can watch them, because the 2017 Golden Globes are on Jan. 8. You can even watch the ceremony the same day as it's set to air live on NBC from 5 p.m. PT .

With speculation already rife as to which TV shows and movies could win at the Golden Globes, the 2017 ceremony looks set to be just as exciting as ever. And with the added delights of Jimmy Fallon hosting the Golden Globes for the first time in his career, we're definitely in for a good time.

As the first major award show of the year, the Golden Globes don't just help to kick start the year in style, but also to supply a taster as to what movie fans could expect from the Academy Awards, which follow it. And considering what a great year 2016 has been for entertainment, the ceremony should help define what the absolute best shows and movies of the year have been. Making the Golden Globes a show that you definitely don't want to miss (so save the date to your calendars now, ladies).

With nominations being announced on Dec. 12, there's a few particular names and titles which stand out as potential contenders for a nomination, or even a win. Damien Chazelle's critically acclaimed musical La La Land is tipped as an awards favorite in 2017 and a definite Golden Globe contender, as well as the performances of its two stars, Ryan Gosling and Emma Stone.

Likewise, the brooding drama Manchester By The Sea is also being hotly tipped as something of a Golden Globe magnet, along with the acclaimed performances of its stars, Casey Affleck and Michelle Williams. However, one of the greatest things about the Golden Globes is that it's also unpredictable and a little offbeat, occasionally honoring movies or performances that the Academy Awards does not.

There's already talk, for example, that R-rated superhero comedy, Deadpool, has the potential to pick up nominations in the Best Musical Or Comedy category and even a possible Best Actor In A Musical Or Comedy accolade for Ryan Reynolds.

Though it would be hard to imagine such a movie being favored more highly than La La Land or Gosling in said categories, the very fact that such a delightfully crude comedy could even receive the honor of a nomination in itself is quite an achievement worth celebrating.

Whatever the nominations reveal, and whatever actually happens on the night, I have no doubt that the 2017 Golden Globe Awards will be quite the show worth watching, as always. And what better way to ring in the New Year than by celebrating all the best entertainment of the past one when the winners are announced on Jan. 8.

More like this
Colin Firth Revealed His Favourite Mr. Darcy (& No, It's Not Himself)
By Sophie McEvoy
'Doctor Who’s New Star Is Already Huge On TikTok
By Maxine Harrison
How Ncuti Gatwa's 'Doctor Who' Casting Impacts His 'Sex Education' Future
By Nola Ojomu
Sandra Bullock, Girlboss Extraordinaire
By Matt Harkins & Viviana Olen
Get Even More From Bustle — Sign Up For The Newsletter