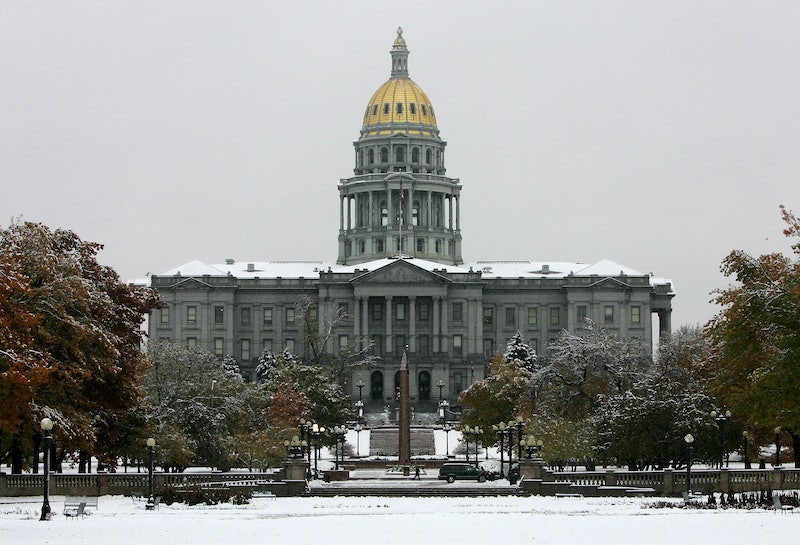 The 538 electors who make up the Electoral College will vote for the next president of the United States on Dec. 19, upholding a tradition almost as old as the country itself. This year, however, the run-up to the Electoral College vote has been marked with a bit more talk of dissent than usual. Two of Colorado's Democratic electors are now suing the state in an attempt to overturn a law requiring they cast their electoral votes for the candidate who won the state's popular vote.

Altogether at least eight electors — seven Democrats and one Republican — have reportedly come together in hopes of keeping the Electoral College from confirming President-elect Donald Trump as president. Their plan is relatively simple: Deny Trump the 270 electoral votes he needs to win. To do this, they've proposed casting their votes for an alternative Republican candidate rather than Trump (for Republican electors) or Democratic nominee Hillary Clinton (for Democratic electors). But with Trump holding 37 electors over the required 270 majority, the plan is a long shot. Further complicating matters are states who criminalize electors who break from their state's popular vote results, known more commonly as faithless electors.

While there is no federal law requiring electors to abide by the results of their state's popular vote, some states, like Colorado, have enacted laws that make voting out of line with the statewide popular vote a misdemeanor. In Colorado, electors are reportedly required to sign affidavits in which they swear to support the candidate chosen by voters in the statewide election. If they fail to do so, they could be charged with a misdemeanor under Colorado law, Lynn Bartels, spokeswoman for Colorado's secretary of state told the Denverite.

Two of Colorado's nine Democratic electors are suing for the right to cast their electoral votes for the candidate of their own choosing. The lawsuit argues the Electoral College is meant to function as an independent body and state laws dictating how electors vote are a violation of the Constitution. A lawsuit filed in a federal district court Tuesday by former Colorado State Senator Polly Baca and Robert Nemanich stated that electors "are entitled to exercise their judgment and free will to vote for whomever they believe to be the most qualified and fit for the offices of President and Vice President, whether those candidates are Democrats, Republicans, or from a third party." A hearing is reportedly scheduled for Dec. 12.

Some Colorado state officials have come out in heavy opposition to the lawsuit. According to Politico, Cynthia Coffman, Colorado's Republican attorney general called the lawsuit "an attempt to dismantle the Electoral College from within" and "an affront to this nation's model of democracy" in a document filed in federal court Friday. She warned allowing the case to proceed "would cause chaos."

Colorado's secretary of state has also called for the lawsuit to be rejected. "To take away that right to vote from the 2.9 million Coloradans, from the tens of thousands of people in the Pikes Peak area who put their lives on the line to protect that right to vote is intolerable," Secretary of State Wayne Williams told KKTV. "That lawsuit should be dismissed." Williams filed a separate legal motion Friday in which he asked for legal clarification regarding how the state should handle electors who violate Colorado's Election Code by not voting for the candidate who won the state's popular vote.

The lawsuit in Colorado is not the only legal challenge to be levied against the Electoral College in light of the 2016 presidential election. According to Salon, California lawyer John Birke has filed a restraining order against all 538 members of the Electoral College in an effort to ban them from voting for Trump on the grounds their votes violate the Equal Protection Clause of the Fifth Amendment. In Florida, Sarah Howland has filed a lawsuit seeking to overturn a state law binding electors to the winner of the state's popular vote.

While it remains unclear whether any of these lawsuits will succeed in enabling bound electors to break from their state's popular vote without consequence, they're certainly representative of how contentious Trump's election has been.