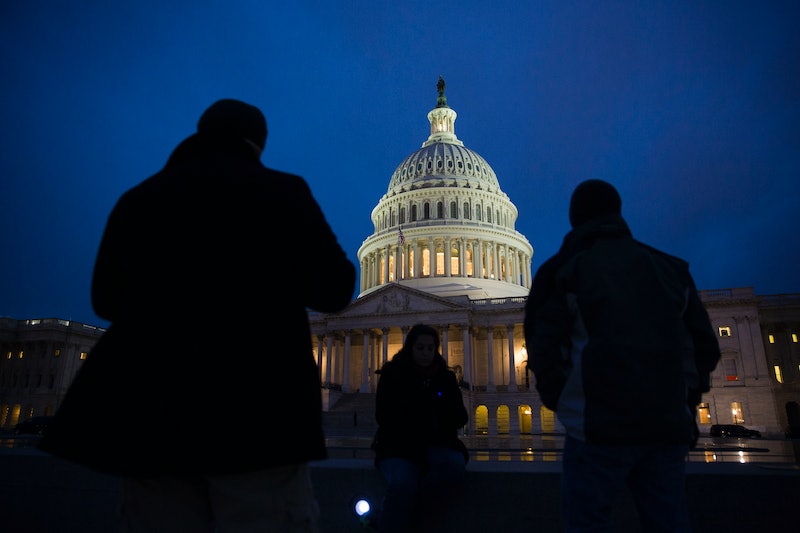 Every year millions of people resolve to be kinder, thinner, happier, and healthier when the new year rolls around. We resolve to eat kale, smoke fewer cigarettes, call our parents more often, and spend less time sweating the small stuff. Thanks to eternal optimism, there's no limit to what might be achieved via the New Year's resolution. But what if, as we resolved to change our daily habits, we made a few political resolutions as well? These seven political New Year's resolutions can help you turn your 2016 worries into effective action.

Now, I'm not here to tell you not to resolve to change everything about yourself (although, good luck with that), but rather to suggest a few political resolutions you might consider adding to your list. Resolving to eat better is great. I can't argue with that. Yet considering what a tumultuous year it's been for politics and what we have to look forward to with the Cabinet President-elect Donald Trump is assembling, a few political resolutions might not be a bad idea. Squeeze them in somewhere between your resolution to stop eating dinner standing over the sink and that one about spending less time searching for Joe Biden gifs.

Here are seven political resolutions to make in 2017

If you make only one political resolution this year (but really why not make a few) have it be this one. Keep abreast of what policy changes are happening at both state and federal levels. Research the people appointed to positions of power within Trumps incoming administration. Follow up on policy or legislation that you find particularly interesting.

2. Advocate For The Facts

With a president-elect who pushes unproven conspiracy stories and tweets baseless claims, it's hardly surprising America's political discourse has become so fact free the Oxford Dictionary made "post-truth" its word of the year. But facts are important. Resolve to search out the facts even when they appear to be presented. Know how to tell real news from fake news. Hold politicians accountable for their deceptions, falsehoods, and manipulation of the facts.

Resolve to do more than tweet your opinion in 2017. Start by finding a cause that resonates with you or a political issue you feel particularly passionate about. It might be immigration, refugees, healthcare, gun control, reproductive rights, transgender rights, capital punishment, climate change, raising the minimum wage, campaign finance reform, or any number of issues currently swirling about in the political arena. Reach out to related organizations about ways you can help with outreach, organizing, raising money, or lobbying.

4. Get To Know Your Congressional Representative

If you're more familiar with the Kardashian family than you are with the folks representing you in Congress, resolve to spend some time getting to know them better. This government website can quickly help you learn who your Congressional representative is. Call them a few times a year to share your thoughts on whatever bills are currently up for a vote in the House. Better yet, show up to any meetings they organize in your area. Tell them what you think about how they've voted in the past and how they should vote in the future.

5. Help Others To Get Involved

If you're already fairly politically active, you might consider resolving to help others with similar concerns find ways to get involved. This might mean circulating a petition door-to-door to increase awareness and involvement on an issue. It could also mean launching a recruitment campaign via social media to bring in more volunteers. However you decide to reach out, helping others get involved is a great way to aid a political cause.

6. Run For Office Yourself

If you followed Sen. Bernie Sanders' presidential campaign then you'll have heard this idea before. If you feel passionate enough about political matters, why not resolve to run for an office at the local and state level this year? Be it a position on the school board, city council, county commission, or in the state legislature, engaging in politics beyond the ballot can be an effective way of driving change – as Sanders says – "from the bottom on up."