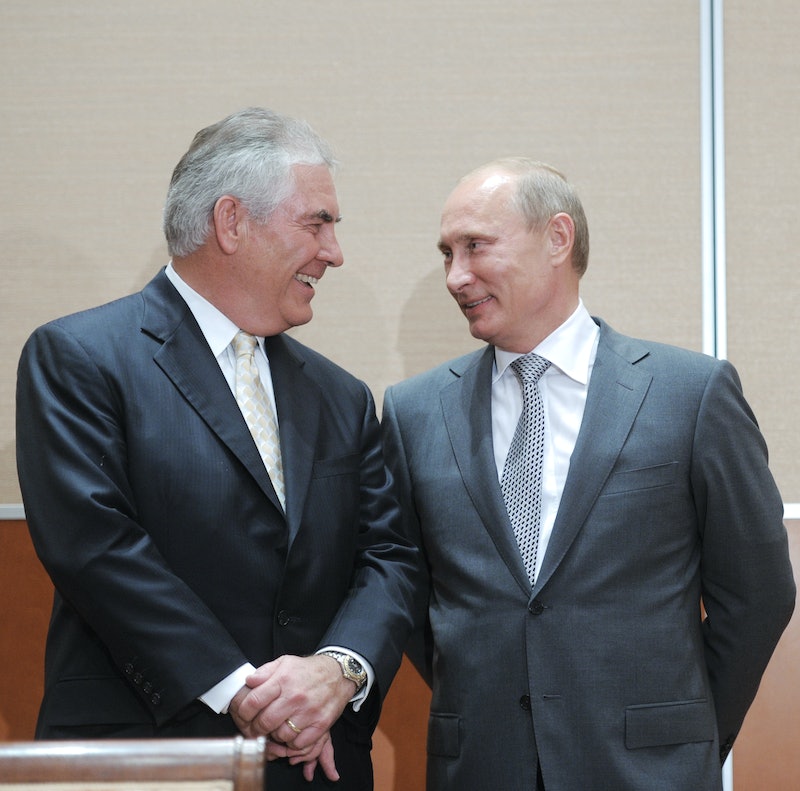 If you thought Donald Trump's wildly controversial Cabinet appointments had finally ended, guess again. New reports Saturday allege that the president-elect will appoint oil giant Exxon Mobil CEO Rex Tillerson to the crucial post of Secretary of State, which is particularly concerning due to Tillerson’s friendly relationship with Russian president Vladimir Putin. Even in a regular election year, a potential Secretary of State with close ties to a foreign government would be cause for concern, and this has been anything but a regular election year. These seven photos of Tillerson and Putin show how chummy they are, which could be a huge problem for the United States if the oil exec is confirmed as the country’s second-leading diplomat.

The news of Tillerson's rumored appointment came at an especially bad time for Trump’s budding administration — The CIA announced Friday that the Russian government directly interfered with the presidential election with the specific intent of helping Trump become president. Tillerson’s long and well-documented history with Putin and the Russian government as part of his tenure at Exxon spans almost two decades, since the pair first met in 1999. Since then, their professional relationship has grown, with Exxon forming a major partnership with the government-owned Russian oil company Rosneft in 2011. These seven photos show how friendly the two are, which means that if Tillerson does become Secretary of State, Putin could have unprecedented influence within the U.S. government.

That Look Only Your BFF Understands

They Even Have Inside Jokes

These photos are especially concerning when combined with the news of Russia's influence in the presidential election, but this situation is so unusual that the next step forward isn't immediately clear. Whatever it is, though, must involve a strong and unequivocal defense of U.S. sovereignty.