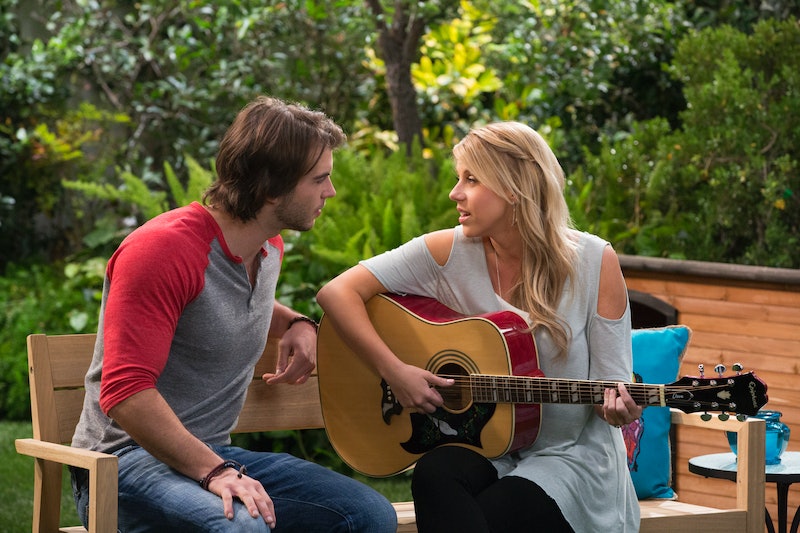 There are SPOILERS for Netflix's Fuller House ahead. In Season 2, Stephanie Tanner says she wants to focus on her music — and she writes a new song, inspired by her new muse. Yup, Stephanie (played by Jodie Sweetin) has a new man — and he's Jimmy Gibbler (Adam Hagenbuch), Kimmy's brother. Once she moves past the whole "He's a Gibbler" thing, Stephanie and Jimmy are very happy together and it's reflected in the lyrics to Stephanie's "The Boy Next Door" song in Fuller House . In Episode 8 of Season 2, Stephanie shares the song with Jimmy, who then makes a YouTube music video that shows the world just how happy they are together.

It makes sense for Jimmy and Stephanie's love to be cemented in song, since they first met (as adults) and bonded as Stephanie sings a song called "Gotta Take Love Slow" in the first episode of Season 2. Then in Episode 8, she debuts "The Boy Next Door," which she says she wrote for her "dreamy boyfriend" Jimmy, who indeed grew up next door to the Tanners (even though his character did not exist in the original Full House). As I previously mentioned, the first music video for the song features Stephanie and Jimmy, but it doesn't do too well with (fictional) YouTube commenters, so Kimmy takes the reins, replacing them with Baby Tommy and Cosmo the dog in her own version, which goes viral. "The Boy Next Door" propels Stephanie to a big TV appearance on father Danny and Aunt Becky's morning show Wake Up USA in Los Angeles in Episode 9.

And the lyrics totally reflect Stephanie's past heartache, her initial hesitation to get into a relationship with Jimmy, and her newfound happiness with her new beau. Check out the lyrics to the catchy tune below.

"The Boy Next Door" sung by Sweetin herself is available for purchase on Amazon and iTunes, as well as being available for listening Spotify. According to the episode credits, the song was written by Siedah Garrett, a Grammy-winning songwriter, and Fuller House composers Jesse Frederick and Bennett Salvay.

No matter what the (fictional) YouTube commenters say, Jimmy and Stephanie are adorable together and it's so appropriate that their love is sealed in a such a fun song — and a viral video, because that is so 2016.