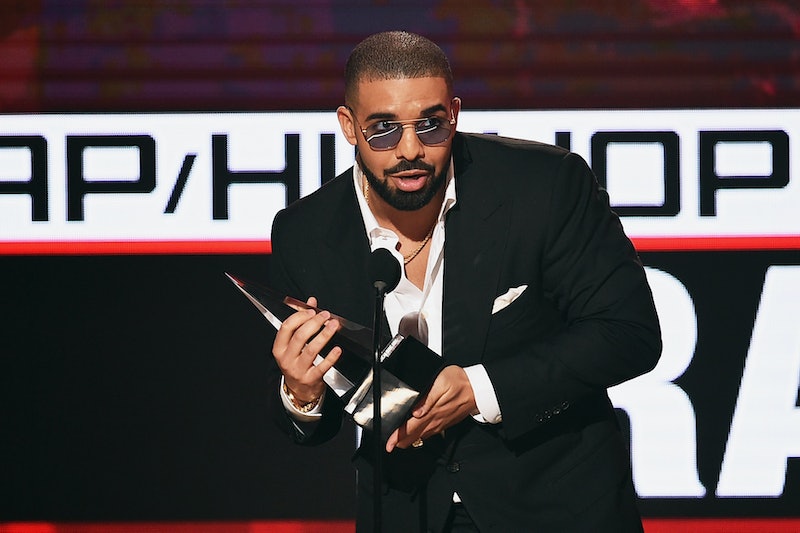 There may be a new dynamic Hollywood duo on the horizon, and it's so, so good. You see, on Saturday night, Drake took a selfie with Jennifer Lopez. But, it wasn't just any selfie. Drake looked positively jazzed to be in the star's presence, and honestly who could blame him? He even insinuated he was giving off heart eyes, which was quite obvious by how hard he was cheesing. So, I think it's now fair to ask, are Drake and J.Lo friends? And if so, can I get in on this friendship?

Sure, anyone can take a selfie together. But while J.Lo might be inclined to take a photo or two with a fan or fellow celeb, she probably doesn't then trust them with her prized possessions. Case in point, before the selfie was posted, Drake bragged just a little bit about watching Lopez's hat for her while she was otherwise preoccupied, as MTV News points out, performing at her show. He wrote in his caption, "Sure I'll hold your diamond encrusted fitted while you catch this Vegas body #Jenny 🌺."

So, you know, no big deal or anything... Actually, wait. Hold up. He called her "Jenny." That is so totally a big deal, perhaps even more of a big deal than him babysitting her Yankee's hat that's probably worth than my house and college education combined. But, first things first, let's look at Drake being a total fanboy with J.Lo and swoon for a second or two. *Reaches at screen to pinch cheeks*

And, here is the aforementioned hat selfie:

While this is all very eye-opening and equally as adorable, it seems like this is the first time that Drake and Lopez have publicly hung out. So, are they friends? Or were they just hanging out for the night? Is this a new thing? Or is it an old but recently awakened thing?

The truth is, Drake has always been a very obvious fan of Lopez. Like, really, really obvious, if him having a visceral reaction to her looking positively stunning at the 55th Grammy Awards is any indication. And I think it is.

Fanboying aside, Drake and Lopez have and still do run in the same circles, so a friendship makes sense. As ETOnline reported in December of 2015, the two were both at Kris Jenner's Christmas Eve party and I think it's safe to assume they crossed paths at one point. Perhaps they even shared a drink and a joke or two. My guess is that Drake and Lopez are probably former acquaintances who are getting to know each other better, hence Drizzy's slightly awkward yet totally adorable geek out over being in the same selfie with her.